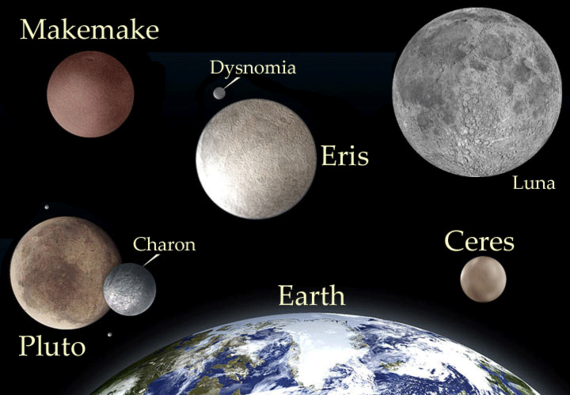 This year two unmanned spacecrafts are taking us to worlds we have never seen up close. The Dawn mission has been in orbit around Ceres, the largest asteroid in the solar system since March, and the New Horizons spacecraft will make a close fly-by of Pluto on July 14. There's a reason we haven't seen them in detail before 2015: they're really small and really far away.

Ceres is only about 600 miles across and almost 200 million miles from Earth. Pluto is a lot larger, at about 1,400 miles in diameter, but is almost 3 billion miles away. Even the best telescopes on Earth and in space cannot resolve surface features on these puny balls of rock and ice. So our two missions are bringing us long-awaited and unprecedented views from two distinct parts of the solar system.

Is Ceres a Planet?
No. 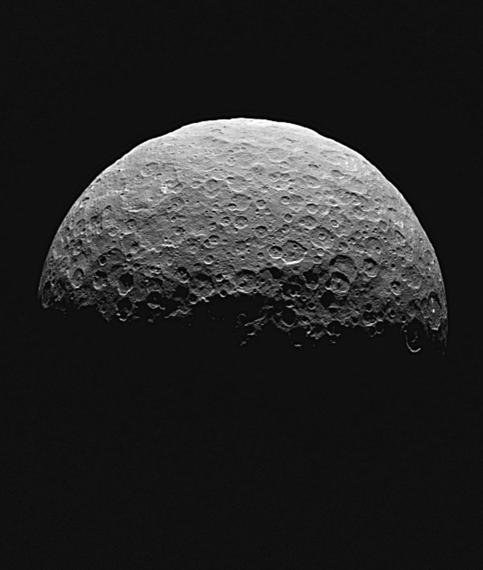 When it was first discovered in 1801, Ceres was deemed a planet since it orbited the Sun like the other planets. But soon astronomers charted more Ceres-like objects. Were they really planets? Astronomer William Herschel, discoverer of the planet Uranus, asked that question in 1802 after observing the newly-found objects. He wrote to his friend William Watson, "Now by what I shall tell you of them it appears to me much more poor in language to call them planets than if we were to call a rasor a knife, a cleaver, a hatchet, etc..." Herschel coined the term, 'asteroids' from the Greek meaning, 'little stars.' They certainly looked like little stars in his telescope and by the mid-1800s, the name stuck. Ceres was not a planet and neither were the other asteroids.

Now we know that there are hundreds of thousands of objects in our solar system that share similar compositions, orbits around the Sun, and origins.

Is Pluto a Planet?

When it was first discovered in 1930, Pluto was deemed a planet since it orbited the Sun like the other planets. Unlike Ceres, it didn't seem to have company. However since 1992 astronomers have detected over 1,000 other objects with similar compositions, positions, and origins as Pluto. These objects have many names including Kuiper Belt Objects, Trans-Neptunian Objects, and Plutoids. In 2006 an international group of astronomers decided that Pluto, which resembles none of the other eight planets, is the prime example of another category of objects in a little-understood outer region of the solar system. Like Ceres, Pluto was kicked out of the planet club.

Some people may hate the new definition of, "Planet," but the newly minted category, "Dwarf Planet," dwarfs even that. Also in 2006, astronomers dubbed Ceres, Pluto and three other Plutoids, "Dwarf Planets." Why the added honor? Because they were round: they were massive enough to form nearly into a sphere.

Roundness! Their spherical shape is the only thing they have in common.

Whether it's a planet, dwarf planet, or ice ball I've waited my entire life to see what Pluto really looks like. Our imaginations have been going wild for 85 years. On July 14, the long wait will be over. 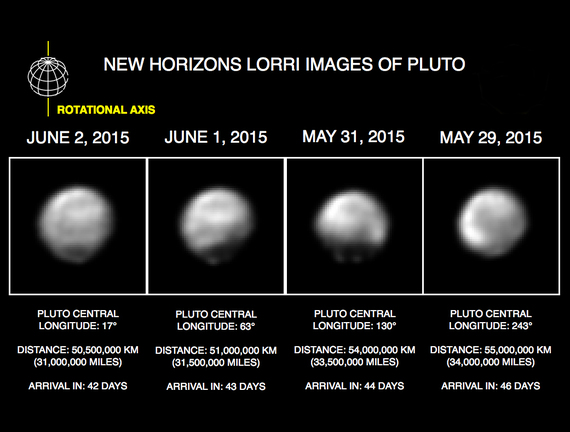 The June images from the New Horizons spacecraft still show a blurry Pluto. In some angles Pluto appears less than round. Planetary scientists have commented that these dark areas are artifacts of the imaging process and that Pluto will be round. As we enter July and Pluto comes into focus, we'll finally find out what kind of world Pluto is. Since I like a good debate, here's hoping that it's not round.