Bigfoot is real. At least that's what veterinarian Melba S. Ketchum claims after a five-year study of more than 100 DNA samples that she believes comes from the elusive hairy beast.

Under Ketchum's direction at DNA Diagnostics in Nacogdoches, Texas, a team of researchers has concluded that the creature may be a human relative that somehow developed around 15,000 years ago as a result of a hybrid cross between Homo sapiens with an unknown primate.

Ketchum's research has yet to stand the scrutiny of independent researchers. While many people have claimed to have seen the creature, its existence has never been confirmed, despite a plethora of photos and footprints. The ongoing search is the subject of Animal Planet's "Finding Bigfoot" television series.

"Well, it came to me, I didn't go after it, that's for sure," Ketchum said of the evidence of Bigfoot's existence in an exclusive interview with The Huffington Post. "I did not believe in these creatures. But my lab did a lot of animal testing, and we did species identification. We didn't have any hits on anything interesting until five years ago."

Ketchum's professional work includes nearly 30 years in genetics research and forensics. After her team attempted DNA sequencing of hair samples from an alleged Bigfoot encounter, they found some unusual things in the hair. But there wasn't enough DNA to conclusively verify what they were seeing.

Ketchum's team consists of experts in genetics, forensics, imaging and pathology. The researcher said she believes that over the past five years, the team has successfully found three Sasquatch nuclear genomes -- an organism's hereditary code -- leading them to suggest that the animal is real and a human hybrid.

Ketchum's study showed that part of the DNA her team sequenced revealed an unknown primate species, she said, which suggests that Bigfoot is a real creature that resulted from this primate "crossing with female Homo sapiens."

"They're not any of the large apes -- they branch off as a separate lineage," Ketchum said. "My personal theory is that it probably branched off and evolved in parallel with the rest of the primate lineage."

The overall results of Ketchum's study will soon be revealed, she said, after a peer-reviewed journal is published. But skeptic Benjamin Radford is dubious about the outcome of this latest attempt to give credibility to the existence of Bigfoot.

"If the data are good and the science is sound, any reputable science journal would jump at the chance to be the first to publish this groundbreaking information," Radford, the deputy editor of Skeptical Inquirer magazine, wrote in LiveScience.com.

Radford suggests that if the mitochondrial DNA is identical to Homo sapiens (modern humans), it could mean one of two things.

"The first, endorsed by Ketchum, is that Bigfoot ancestors had sex with women about 15,000 years ago and created a half-human hybrid species currently hiding across North America.

"There is, however, another, simpler interpretation of such results: The samples were contaminated. Whatever the sample originally was -- Bigfoot, bear, human or something else -- it's possible that the people who collected and handled the specimens accidentally introduced their DNA into the sample, which can easily occur with something as innocent as a spit, sneeze or cough," Radford wrote.

Not so, counters Ketchum.

"Early on, we started getting human results on the mitochondrial DNA -- that's maternally inherited and it can show where you're from," Ketchum said. "Different labs had already tested alleged Sasquatch samples, and all of these labs were getting human results, so they just threw it out.

"We split the samples with another forensic lab -- one worked on it manually while the other did it robotically, extracting the DNA -- and we ran several tests to confirm there was no contamination. And we ended up getting human sequences on many samples."

In LiveScience.com, Radford pointed out that since "There is no reference sample of Bigfoot DNA to compare it with, by definition, there cannot be a conclusive match."

Ketchum's work isn't the only ongoing research project aimed at trying to confirm, through DNA, the existence of Bigfoot.

In the U.K., researchers from Oxford University and the Lausanne Museum of Zoology are examining alleged Bigfoot remains to test for unusual DNA. Their results will be submitted to a peer-reviewed scientific journal.

One theory about a possible explanation for Bigfoot or Sasquatch is that it could turn out to be a large primate called Gigantopithecus, 9-foot-tall apes that presumably went extinct around 100,000 years ago. 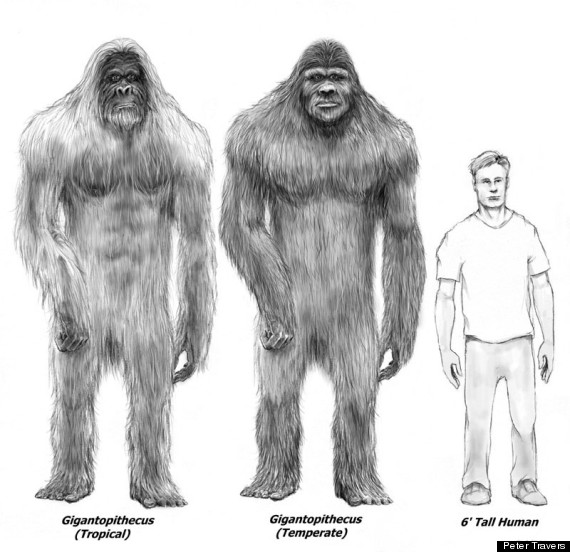 "My working hypothesis has always been that this is very likely Gigantopithecus extant -- that we have a species that's in the right place at the right time, the right size and some of the right characteristics in the form of Gigantopithecus in East Asia during the late Pleistocene [era] to have expanded into North America," said Jeff Meldrum, a professor of anatomy and anthropology at Idaho State University.

"It's not a matter of belief or wishful thinking -- it's a matter of the preponderance of the evidence, be it eyewitness accounts, footprints or hair that defies identification or attribution to known species," Meldrum told HuffPost.

"We're waiting for the results in studies that are ongoing, looking at potential DNA evidence -- DNA sequences extracted from samples of hair and blood and tissue. All of these things are the basis and motivation for undertaking this kind of approach," he said.

Meldrum, author of Sasquatch: Legend Meets Science, is skeptical of most Bigfoot videos that show up on YouTube.

"In this day and age of cellphones, smartphones and Handycams, why aren't there more pictures? And there are, but it's also a testament to the fact that most people are lousy photographers, even if they're composed long enough to snap a picture in that brief instant of an encounter with something strange and unusual like this."

If a peer review of Ketchum's findings eventually confirms Bigfoot's existence to the satisfaction of the scientific community, she's adamant about what the next step should be.

"I’d like to see them have the same protections as any other human as far as the right to life, liberty and the pursuit of their own happiness, meaning that they be left alone and not put under a microscope, not hunted, not harassed, not chased through the woods -- leave them alone," she said. "They’ve existed for thousands of years this way and don’t need habitats set aside. They’ve lived under our noses all this time."

Check out these reported Bigfoot images through the years

PHOTO GALLERY
The Legend of Bigfoot Continues
Download
Calling all HuffPost superfans!
Sign up for membership to become a founding member and help shape HuffPost's next chapter
Join HuffPost