The worlds of Bigfoot and science collide tonight with the premiere of Spike TV's "Ten Million Dollar Bigfoot Bounty."

Actor Dean Cain hosts and leads an ambitious expedition to the Pacific Northwest of America to try and discover the elusive tall, hairy creature known as Bigfoot, aka Sasquatch. 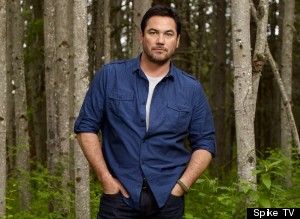 "Before the show, I was extremely skeptical, however hopeful," Cain, 47, told The Huffington Post. "Then I started doing research and found that we discover as many as 15,000 new species every year, on average, in the United States. They're usually insects and sometimes primates. There's a lot of things to be discovered that we have not laid our eyes upon."

Spike TV assembled nine teams of hunters of varying skills and experience for the programs. Certainly the big lure for these teams -- each comprised of two people -- is the financial holy grail at the end of the eight week-long series: $10 million for irrefutable proof of Bigfoot's existence.

The prize, underwritten by Lloyd's of London, is one of the largest cash prizes ever offered in TV history.

Cain was overwhelmed by the remote regions he was taken to in search of Sasquatch.

"We'd drive for five hours ... get out of our vehicles and then hike for two hours to set up where we were going to go on the hunt. And from there, it's hours -- four, six, 10 hours to hunt. So, you end up in some really remote places. I can't believe how much space is up there [in the Pacific Northwest]. We must have been to so many places where humans haven't been for decades -- it was amazing to me."

The teams are comprised of both Bigfoot hunters and big game hunters. Over the eight weeks in extremely remote wilderness areas, they will do their best to come back with both DNA proof and visual evidence.

On hand with Cain are two scientists -- referees, if you will -- to keep a close eye on the nine teams of "squatchers," as they are called. They will also provide an advanced method of DNA analysis for any possible Bigfoot evidence.

"Spike TV gave me the opportunity to gather all of the equipment one would need to set up a laboratory that could give rapid DNA results, setting up in a cabin or a large tent out in the forest," said biological anthropologist Todd Disotell who runs New York University's molecular primatology lab. 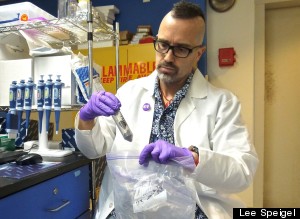 "We set up the laboratory and were able to take DNA samples, and between six and eight hours, I could narrow it down to the type of animal it was. I couldn't give a precise species identification, but I could narrow it to the close relatives -- the genus and family level -- in scientific parlance," Disotell, 50, told HuffPost.

Disotell, seen at right in his NYU laboratory, had a great deal of material to load into his portable DNA lab (pictured below).

"Basically, I said I wanted biological material. So, I got lots and lots and lots of feces. But I also got a lot of hair samples. The most exciting kind of samples that we collected were actually what we refer to as environmental DNA. I allowed [the teams] to collect biting insects, because in the belly of a mosquito -- within the first 24 or so hours after it bites something -- there is viable DNA in the mosquito. I was able to test dozens and dozens of insects to see what kind of animals they had bitten." 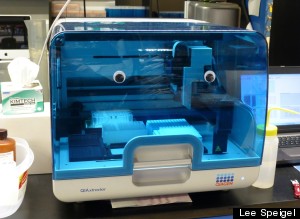 Disotell said that, from a scientific perspective, it was exciting to get "many different signatures of many different mammals from the insects alone. You can only cover so much ground and see so many things with a few people, but you can trap 1,000 mosquitoes and find out nearly every animal that lives in the woods."

Along with Cain and Disotell, primatologist Natalia Reagan is the third judge in "Ten Million Dollar Bigfoot Bounty." Holding a Master's degree in anthropology, Reagan specializes in primate conservation and is currently involved in helping an endangered subspecies of spider monkeys in rural Panama. 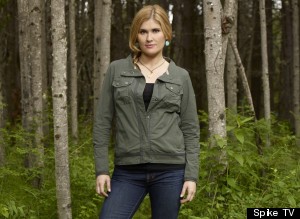 "What I brought to the show was talking to the teams about what they should be looking for when they're searching for a non-human primate -- to basically get 'inside' the primate," Reagan (at right), 34, explained to HuffPost.

"I asked them, 'What do you think Sasquatch is like? Do they live in a husband-wife duo? Is it a family group? Are they solitary? Where exactly would you find them? Where do they sleep? Where do they eat? What do they eat? Do they hunt? Get inside the animal that you're tracking.' When I study spider monkeys, that's what I have to do, because I'm looking for a type of primate that's very hard to find."

Bigfoot news reared its head many times in 2013, with stories about alleged creature DNA, reported videos, still images of supposed unexplained Bigfoot (or is that Bigfoots or Bigfeet?) and some hoaxes thrown into the mix. But definitive evidence of the beast's reality remained out of reach of Bigfoot hunters.

The Spike TV series premieres amid claims from Justin Smeja -- one of the show's Bigfoot hunters -- that he killed an adult and young Bigfoots in 2010.

One problem with his story is that he's gone on record saying he believes "Bigfoots are some sort of people -- a wild man or archaic human if you will. They are not just some other animal to be hunted like deer, its [sic] immoral they are intelligent."

But, four years after he allegedly killed two Bigfoots, where are the bodies? Where's the irrefutable DNA evidence? Where are, at the very least, photos or videos of the two creatures?

And yet, Smeja is showing up on "Ten Million Dollar Bigfoot Bounty." Of all the possible Bigfoot hunters out there who auditioned for this series, was it fair that Smeja was chosen, despite his dubious Bigfoot-related past? We'll have to wait and see.

As the production unfolded in the Pacific Northwest last year, Cain says that certain attitudes emerged from the teams of hunters.

"Well, it's a competition. I never expected any gamesmanship. I figured they were all of the same ilk when we began. But as we learned who the teams were, they ended up being big game hunters, trackers, Native American trackers. They were just different groups of people, and there was a lot of tension between the teams.

"Frankly, I was shocked at how they went after each other," Cain said. "That, to me, became one of the more entertaining aspects of the show. I never saw some of this stuff coming. Teams and teammates were going at each other, because there was so much on the line. Ten million dollars is a very large cash prize."

Disotell continues to go through the DNA samples gathered by the teams months ago. He wants to be very precise.

"I'm still carrying out some analyses on samples from the expedition. Scientists can make mistakes, and on something with these stakes -- both the money, but more important to me, my reputation -- I'm not going to go off half-cocked on this, like some other scientists have in the recent past."

Reagan remains skeptical, but she noticed real changes in the teams as they put their best feet forward on the Bigfoot hunt.

"I might not believe everything they say, but they are good people, passionate in their convictions. And I saw them being innovative. When they learned information, new facts about what they were looking for, they changed and amended and their theories evolved, which, to me, is success in the fact that the science is working and that people are actually learning.

"I'm hoping that the people at home will also be able to see that theories can change, that science is not static."

Each week, a team will be eliminated from the hunt with the last team left standing to receive $100,000. But the big question remains: Did anyone find irrefutable evidence of Bigfoot -- strong enough to walk away with ten million big ones? We won't know until the series finale, eight weeks from now. And nobody from the Spike TV production is leaking any information about it.