January roared in like a lion and out with a flurry of Bigfoot reports.

The year began with a Jan. 3 controversial story of how a fisherman claimed to have seen and photographed Bigfoot -- known in Florida as a Skunk Ape -- while it allegedly sat in a few feet of the murky swampy Hillsborough River outside of Tampa, Florida.

Fast forward to Jan. 25 when HuffPost reader Matthew McKamey sent a video of something he says he and a friend saw while canoeing in a swamp that day in Lettuce Lake Park near, of all places, Tampa, Florida.

Both reports are highly dubious. Let's take a look at the second report to see if it's the legendary hairy beast ... or possibly another hoaxer who'll risk getting his butt bitten off in a Florida swamp, just to post some viral video on YouTube. 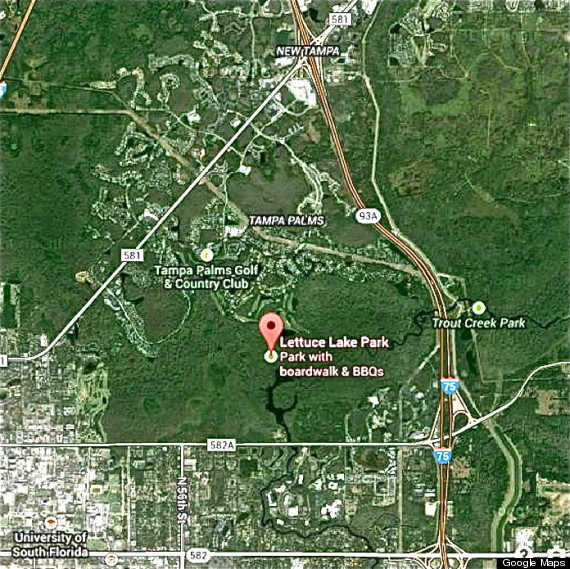 Travel companies encourage the public to visit the local swamps around Tampa, to spend time hiking, fishing and canoeing, and yet, they issue cautionary notes to the public to be careful of all the local alligators and snakes in the area that also encompasses the University of South Florida.

"Being in Florida, you tend to be used to that," McKamey, 28, who performs tree and landscape maintenance around Tampa, told HuffPost.

"There are business parks here that have little manmade lakes with fountains in the middle and gators rest on the fountains. You get used to it. Just the other day, while canoeing, I saw a number of gators, ranging from four to six feet in length."

The two men took a canoe into one of the many swampy inlets of Lettuce Lake Park. Around 1:00p.m., they heard a noise accompanied by tree movement. McKamey grabbed his phone and started videotaping.

Here's the video shot by McKamey:

"Initially, it was exciting and it was like, 'Oh, is that a bear? That's pretty cool," McKamey said. "When we moved up closer, it started to look less and less like a bear. That's the point where I decided to start filming. In that moment, I was looking at it and getting a little freaked out, especially once it started really moving."

"You could tell he was slapping the water and it looked like maybe he was grabbing something. At the time, I was just thinking, 'Holy s**t, what the hell is this?' By the time it walked off, my buddy was just like, 'Let's go! Let's go now!'"

McKamey said that his friend was so shaken by the experience that he won't talk about it. At one point in the video, the friend moved one of the canoe paddles, making a noise, which seemed to catch the attention of the hairy individual in the swamp.

"I don't know if it was coincidence that it started moving because of the noise, but it seemed to know that we were there," McKamey recalled. "Where the video cut off is basically where I stopped taping. We wanted to leave and I couldn't do both video and row."

In addition to sending his video to HuffPost, McKamey also gave it to a website called Bigfoot Evidence. They, in turn, forwarded it to Phil Poling, a former Oregon police officer whose YouTube channel, ParaBreakdown, investigates Bigfoot claims by examining photographic evidence.

"There are many inside the paranormal community who are frankly tired of the senseless hoaxing going on, primarily because hoaxing tends to cause validation for the cynics and skeptics," Poling, 60, who currently works on a security team for the Everett, Washington, Port Authority, told HuffPost.

"By investigating claims and looking for rational options, we hope to educate people in the community as to how to recognize the signs of hoaxing -- what I like to call the red flags."

Did Poling find any of these red flags in McKamey's video or story?

"The mannerisms of the subject appear to be very apelike in its behavior -- [the way] it dips its hand down into the water and brings it up. We don't know if it's drinking or washing. Its movements seem rather fluid.

"Some people who have seen the video have remarked that it looked like it may have had a tail, and others have mentioned that it could be a snake it was holding. But it's hard to tell, mainly because it's dark, afternoon lighting and we're looking almost directly into the sun, with a lot of lens flare or glare going on.

"As it leaves, it doesn't seem to be upset or angry or anything. It doesn't run away, it just casually walks away, and this is something that many people who have encountered Bigfoot reported seeing -- that the subject would see them and then simply just wander off."

Poling enhanced McKamey's video to make it easier to view the large thing moving in the swamp.

"I stabilized the original to make sure it was as steady as I could get it. After that, I could get close in without having the image go completely off the screen. Then I enhanced the imaging so I could get as much light onto the subject as possible.

"You could see the mannerisms of the subject more clearly, and you could see what looked like hair coming off the creature, the way it moved through the water, the way its legs bent. Also, when you heard what sounded like the paddle hitting the side of the canoe, you could actually see a reaction -- its head moved up quickly as if there was some recognition there."

In the end, Poling wasn't completely convinced this was a hoax created by McKamey.

"I came away from this with a distinct impression that I have no idea what it is," Poling said. "It could be a guy in a costume or it could be the real thing. I do not know. [McKamey] sent the original copy to Bigfoot Evidence, not asking for anything in return. Why would someone take all of this time, effort and danger just to give the video away anonymously?"

McKamey says he's not likely to go looking for the "thing" again.

"Thinking back to what we saw, I think there's a good chance that we actually saw a Skunk Ape or Bigfoot or whatever you want to call it. It was not a bear, I know that. It wasn't human. It's like a once-in-a-lifetime experience. To have been where we were, when we were, the likelihood of it happening again, I'm highly skeptical.

"I'm fairly thankful that it decided to go the other way."

After HuffPost published this story, we heard from Ben Hansen, one of our regular analysts of things related to Bigfoot and UFOs. Hansen has investigated many reported Bigfoot cases around the country and offered some thoughts on this case:

One of my biggest doubts regarding the authenticity of this latest video is that it comes right on the heels of another Tampa Skunk Ape case that received massive media attention. The likelihood that this video is a product of a copycat hoax is quite significant given that Tampa and Bigfoot have been in so much of the spotlight this month, and the former case has largely been deemed a hoax.

Within the actual content of the video, there's not much we can point to which would dismiss it outright as a hoax. Conversely, there's also not enough that compels me to believe we're looking at an actual Skunk Ape. It's either a real Skunk Ape or a bunch of guys who drew straws to see who was going to put on the costume.

I also have a problem with the way the alleged animal moves. If hoaxed, I'll give them credit for the realistic movement of the arms when it looks like the animal is bending over drinking. However, I'm very suspicious once he goes on the move. When compared to the dramatic arm swinging and brutish steps that follow, his entry into the swamp looked very human.