Will forensic analysts succeed in doing what Bigfoot hunters have only dreamed of achieving?

Skeptics and believers are holding their collective breath waiting for the results of a peer-reviewed, five-year study conducted by Texas veterinarian Melba S. Ketchum.

Ketchum claims to have isolated enough DNA samples from alleged Bigfoot hair, blood, saliva and urine to prove the existence of the legendary beast.

While we're all waiting for an eventual thumbs up or down on Ketchum's DNA assertions, one group of Bigfoot researchers has gathered an impressive number of videos reportedly showing numerous images of Bigfoot (or Bigfoots, if you will) from locations around the country.

Many new videos have been submitted to the online group Facebook/FindBigfoot (FBFB), including one striking video from September that reportedly shows a Bigfoot very near to the person who captured footage of the creature on his mobile phone.

"What's so amazing about this new video is how close the Bigfoot is to the camper's tent," Jack Barnes, chief video analyst for FBFB, said in a press release. "A Bigfoot usually maintains maximum distance from humans, but this one couldn't have been more than 25 feet away."

Check out these Bigfoot/Sasquatch videos spanning 45 years from 1967 to 2012 (story continues below):

The new Bigfoot videos have encouraged the FBFB team, and many are confident that someone will soon grab that indisputable Bigfoot image or video for all the world to see.

"With all the mobile phones and video out there, we've seen a spike in the quantity and quality of Bigfoot submissions. We want to celebrate 2013 as 'The Year of Bigfoot' to remind people that each video submitted helps our community to learn more about these amazing creatures," Barnes said.

Whether or not you believe Bigfoot exists, the FBFB video collection spans 45 years between 1967 and 2012 and begs the question: From a statistical point of view, is it reasonable to assume that every person who has taken and submitted these visual accounts is either confused or deliberately perpetrating a hoax? Or is it possible that even a small percentage of these eyewitnesses might have, in fact, honestly captured something unusual -- and similar -- on film or video and simply want to share it?

An Idaho State University scientist is also looking to 2013 to be the year when the existence of Bigfoot can finally be proven and skepticism laid to rest. 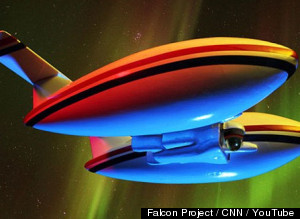 "The beauty of this system with the very high-tech camera equipment is that the initial surveying and identification of targets will take place from 2,000 to 3,000 feet in the air," Meldrum told The Huffington Post.

"It won't be this big, ominous blimp cruising over the tree lines, but it will be this little speck at night that's painted black with some lights on top. It'll just blend in with the starry background," Meldrum said. "Most wildlife usually aren't as aware of things up in the air as they are of things at eye level and on the ground, and even if they did happen to glance up, they wouldn't take notice."

Meldrum is working on the Falcon Project with project founder and previous Bigfoot eyewitness William Barnes. The pair hopes this aerial Bigfoot search will get off the ground in 2013 and result in definitive proof of the elusive animal.

Are all Bigfoot images and videos faked? Take a look at more of them through the years: