A teen who tweeted an offensive statement about Trayvon Martin learned the hard way this week that social media can have professional consequences, when a Michigan company took immediate action and terminated her before she had even begun her new job.

The 17-year-old, who had been hired at a Biggby Coffee franchise in Livonia, Mich. but not yet begun training or started working reportedly tweeted: "I want to thank god... for that bullet that killed Trayvon Martin," according to CBS Detroit.

According to MLive, it was posted to her account the night a jury delivered a "not guilty" verdict for George Zimmerman after he shot and killed 17-year-old Martin.

Shortly after, offended individuals tweeted at the company and filled its Facebook page with messages condemning the company for hiring a "racist" employee and pledging not to patronize the shop.

"I did hire her, but ... I had no knowledge of [her tweet] whatsoever,' he said. In a Facebook post on the Livonia store's page, Perry said he had received hundreds of calls about the situation.

The company released a statement earlier in the week saying the employee had been suspended pending additional details. On Thursday, Perry said she had been let go.

Some commended the company's decision, including Twitter user @MissJia, who had previously called out the girl's tweet.

"I, for one, was happy that she didn't get a chance to start. IMO, it shows character in Biggby as a business," she wrote.

In the past, the company based out of Lansing, Mich. had to make a large change to avoid offending their customer base. Previously called Beaner's Coffee, they rebranded in 2007 after receiving criticism for their name (which is also used as a derogatory term for Mexicans).

“As we’ve continued to expand into new markets, we’ve heard more and more comments about our name, to the point that we had to take a hard look at changing it,” Biggby CEO and co-founder Bob Fish said at the time. “We ultimately felt we would be condoning the use of a disparaging term if we chose to do nothing.” 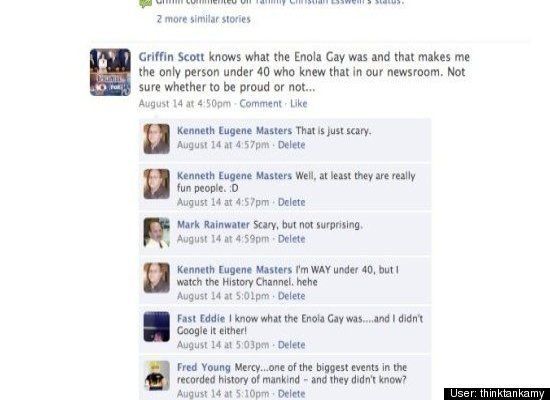 1 / 1
Griffin Scott and the Enola Gay Facebook Bomb
<a href="https://www.huffpost.com/social/thinktankamy"></a><a href="https://www.huffpost.com/social/thinktankamy">thinktankamy</a>:<br>Former KTVE News Anchor Griffin Scott was fired after posting the above reference to the fact that no one in his news room at the time knew anything about the Enola Gay (the B-29 Superfortress bomber that dropped the first atomic bomb--one of the most significant historical events of that century). The comment lead to the firing of Scott, after one of Scott's coworkers found the post to be personally offensive, effectively ending a 23-year award winning broadcast news career. Lesson learned? Be careful what you post. Even the most mild of comment can offend the most sensitive of co-workers.