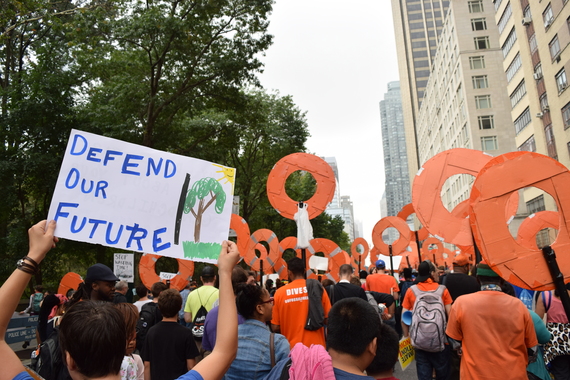 I preached a version of this sermon in June at the church I attend in Brooklyn, St. Lydia's. The reading for the day was from the Book of Genesis, chapter 3.

There's something I need to tell you all about myself. Recently, I've become one of those people with clipboards who stands on the sidewalk near Union Square. You probably know what I'm talking about, the men and women who want you to donate to Children International or the Human Rights Campaign when you're just trying to get to work. The ones I try to avoid if at all possible. (Although soon after I moved to New York, untrained in the ways of city walking, I stopped for a chat I now I send $22 every month to Children International. I'm happy to do that though.)

I've only done this a couple of times, but I was in Union Square the other day trying to get people to sign a petition about climate change.

Most passersby did what I usually do, they refused to look at me or gave a little shake of their head and went on to buy their carrots and lettuce at the farmer's market or drop off their bags of compost. Some practically began to run away.

I'm a relatively shy person and really hate bothering other people, but one thing worse than standing in the park trying to get people to sign your petition is climate change. That's something I care deeply about, as I know many of you do, too.

Now, this is not going to be a sermon about nature or how I find God out in the woods. I have from time to time, but I also find God in my living room and right here at St. Lydia's.

I do like living on this planet. A lot. I like trees and animals and birds are OK, too. I love the rocky mountains where my family used to go camping every summer and I think that those sunny, spring days right after a long winter are practically the meaning of life, but that's not the main reason I'm concerned about climate change.

In the Christian tradition, one of the things we learn from the story of Adam and Eve eating that apple is that our actions have consequences for generations to come. In that story, Adam and Eve didn't really understand what they were doing, it seems to me. They just wanted a little more knowledge, to test the boundaries of what they could do. The result was they had to give up the garden. From that moment on, they had to work hard to live on the earth.

A year or so ago, I started reading a series of news stories, which many of you have probably read, about the melting ice caps and mass extinctions. I learned that we have only a matter of decades to cut our carbon output drastically or we're going to make the planet practically uninhabitable. And maybe that's when I finally realized I was no longer in the garden, where we can just take what we need without any consequences. I was reminded that living on this earth requires something of us.

Climate change is urgent and it's happening now. 2015 is on pace to be the hottest year ever recorded. I know hearing this kind of stuff is overwhelming. Sometimes thinking about this makes me panic and try to figure out what I can do, and at other times I want to do everything I can to think about something else. To keep my eyes straight ahead on where I am going and avoid the larger picture.

The other day in Grand Army Plaza I tried to get someone to sign the petition and he said to me, "Nothing is going to change. Too many people are making too much money from the fossil fuel industry and there's nothing we can do." It's hard not to be equally cynical sometimes. It's hard not to descend into despair. But that kind of cynicism ultimately lets us off the hook. That guy didn't sign the petition. Not because he didn't agree, but he couldn't be bothered. What's the point?

It's easy to feel hopeless, and those moments are to be expected, but ultimately giving in to that makes God small. Too small to help us.

A few years ago I interviewed the writer and environmentalist Bill McKibben. He's created a movement called 350.org that continues to grow. I'm a part of it. I asked him if he ever feels overwhelmed by the problem of climate change.

Which is why I and many of you and 400,000 other people marched last September in the People's Climate March that 350.org organized. As I've said before, I felt about that march a little like I do about prayer: I couldn't point you to exactly what effect it would have, but I felt like it was something I needed to do. It was an act of hope. In the face of the feeling that the world is broken in this daunting and complicated way, and something needs to be done but it's far from clear what, sometimes all I can do is march in hope and faith.

Not acting, for me, is giving in to my worst impulses of cynicism and despair. It's passing the blame along as Adam and Eve do out of fear and shame. I can surrender to those impulses, or I can surrender to hope, which is what faith is.

None of what I'm saying is meant to make anyone feel guilty about having a refrigerator or turning on their lights or anything they have or have not done. Jesus doesn't ask his followers to do the impossible: to change the past or to change who we are, but he does ask us to step out in faithfulness.

The way forward may not yet be obvious but there is so much reason to hope. Almost every day I read about a new technology, activists making headlines, or I hear a new voice speaking out. There's much we can do locally, and globally. As journalist and activist Naomi Klein said in a recent graduation speech, "the very idea that we as individuals could play a significant part of stabilizing the planet's climate system is objectively nuts. We can only meet this tremendous challenge together. As part of a massive and organized movement."

She told a story about a community farm in Red Hook, Brooklyn. They grow healthy and local food and run a farmers market. Superstorm Sandy destroyed their harvest. They do everything they can to create a sustainable lifestyle, but they still need other people to act on a larger scale to keep storms like that from becoming more frequent.

The people who will suffer the most from climate change are people in Africa and south Asia, the poor and the vulnerable in our own country.

I have air conditioning and New York will be fine for a long time because we can afford to build floodwalls. I have what I need and my children probably will, too. But stewardship is not just about what I have, it's also about what I do.

So I try not to make God solely the God of personal choices, the God of which light bulb I buy and my personal spiritual experiences. God is all those things, but God also is the God of big movements and community, of the garden and everything beyond it. The God of hope.

I think we've seen evidence of this recently. On Friday, June 26, when I should have been working I was reading about marriage equality, seeing my friends and family members and so many others celebrating that their love is recognized all across the country, and I was trying not to cry in my office. That victory was the result of the hard work of a movement, and also a little grace. It's something unforeseen only a few years ago.

With that in mind I can do a few small things. I can step out in the march or stand on the street corner or simply remember that our action and inaction affects our children and their children, that when we return to dust and the earth is passed on to them, they will suffer or celebrate based, in part, on what we've done. I try to remember that God is larger than us, that God is God of the whole earth.