It's no secret that "The Biggest Loser" is unhealthy. Outlets like The New York Times itemized the hazardous medical implications of such extreme and rapid weight loss as early as 2009. Yet, the "Biggest Loser" is flawed beyond the questionable practice of more than six hours of exercise a day. Ultimately, the concept of diets -- absurdly rigorous or not -- are faulty attempts at healthy living. And the imposition of such an intense weight adjustment has an alarming impact once the cast leaves the ranch.

Huff Post TV spoke to past contestants to see what the real world was like after "The Biggest Loser," and the techniques they used to keep (or attempt to keep) the weight off. Despite the intensity of the experience on campus, often returning to the real world was a more rigorous task.

After Rachel Frederickson's controversial win at the end of this most current season, health concerns relating to the show resurfaced with greater force than ever before. While these issues are valid, the most crucial falling of the show is its unrealistic expectations about life after the ranch and the relative abandonment of contestants once the finale has aired.

"One of the complaints I've heard most frequently is the lack of after care," said Kai Hibbard of Season 3. Gary Deckman, the first man to ever step on the "Biggest Loser" scale, talked about struggles for those who don't receive promotional deals or head into health industry careers. He said he might have kept the weight off if he stayed on the ranch, admitting it is too difficult to maintain with work and a family.

As a runner-up from Season 1, Deckman received a deal with 24 Hour Fitness, which included 300 training sessions provided by the gym. He spoke about diligently working out in the year after his time on the show (sometimes attending between three and five of these sessions a week) and eventually running the Los Angeles marathon, also with sponsorship. But Deckman laments that since those deals have run out, he is "kind of back to [his] pre-Biggest Loser" state.

On the show, Deckman lost 71 pounds from a starting weight of 227. In recent seasons, contestants push 400 pounds at the beginning of the show. As the average size increased, so too did the rigorousness of the show. While Deckman spoke of working out around six hours a day on campus 10 years ago, contestants like Mike Morelli from Season 7, spent closer to eight, or even 12. 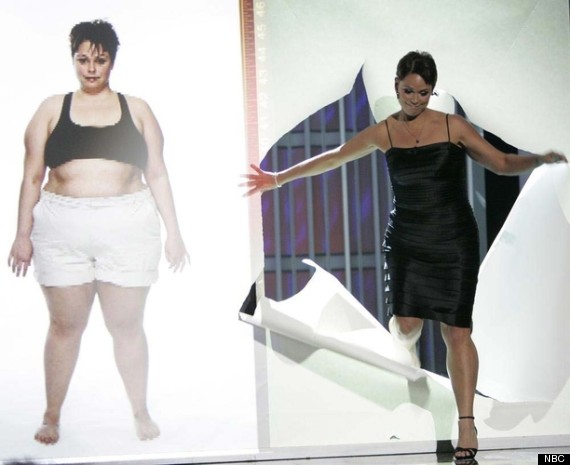 Kai Hibbard, emerging for the finale of Season 3.

If anything, then, the struggle of the transition back to a daily life, which includes other obligations beyond eating healthfully and working out, is even more difficult. Hibbard had a horrific experience, developing an eating disorder as a result of the show, with which she continues to struggle today. Morelli, who was also the runner-up from his season, had a positive experience on campus. However, attempting to set unrealistic requirements for himself, he faltered in the years that followed. "I would do stuff for fun, like, once I just decided, 'I'll be a vegetarian,' and then I did that for nine months and got sick of it," he said.

It wasn't until he stopped trying to set such strict rules for himself that Morelli found a balance. "I'm healthy now, but it's been five years," he said. Now, he'd call himself a "mindful eater," engaging in about an 80-to-20 ratio of healthy and not so healthy choices. He'd let himself go out to eat or drink with friends, but also work out around 45 minutes most days.

To be fair, Morelli is currently a trainer, and employment in the health industry makes it easier to fit workouts into his schedule. But the reality is that setting rules and regulations for oneself is what is so aggressively unsustainable. "Setting out to diet is a failure in and of itself," said Marissa Sappho, an NYU professor and psychotherapist specializing in eating disorders. "We know from decades of research, 95 percent people regain weight, usually plus some." An "[obsession] with calories and numbers and nutrition disconnects us from our own intuitive process," Sappho explained. And, when you think about it, such numbers -- on the scale and calorie counts -- are at the heart of "The Biggest Loser" program.

Although losing weight so quickly is most often dangerous -- leading to cardiac and other issues -- Sappho believes there is hope for contestants of the show, if they can find their way to intuitive eating. "Part of the hope might mean shifting their own ways of thinking about their body ... shedding that shame they might still carry with them and focusing on their sense of self," she said. 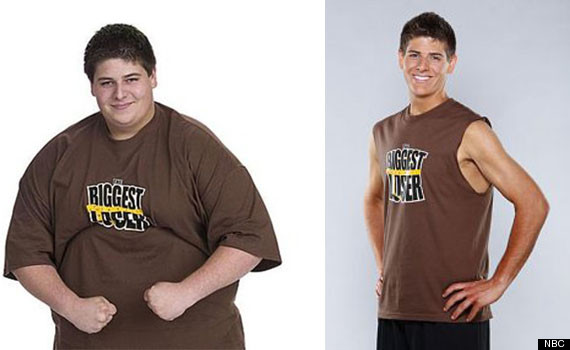 Mike Morelli poses before and after his time on Season 7.

For those attempting to lose an extreme amount of weight, Sappho recommends a lifestyle change, instead of extreme dieting. As human beings, our perpetual goal is to be satiated in one way or another, and denying that from ourselves in terms of food often leads to binge-eating. "We're all born knowing how to eat and how to stop when we're full," she said. And that idea, of eating intuitively, is about listening to your body, rather than depriving yourself. "You can have the bagel or two that you're craving for breakfast, but maybe that means you choose a salad for lunch. Maybe that means you go to the gym later that day."

Of the growing "Biggest Loser" community -- many of whom continue to keep in touch via a Facebook group -- there are some outraged participants, while others are more than happy with their time on the ranch. But they all seem to be in agreement about one thing: Shifting back to life off campus was the most trying part of the journey. Some put the weight back on, and others continue to pursue a healthy lifestyle, but none of the alumni who have kept the weight off seem to have maintained such a strict calorie-counting lifestyle.

"The biggest thing is losing control," Morelli admitted. "If I could have stayed in that environment ..." Deckman trailed off, regretting the fact that he had just come off a period of over six months without working out at all, "Well, it would have been easier."