Felix Starck had what he calls a "perfect life." As a recent college grad, he had a degree, a job lined up and a girlfriend and family, all comfortably situated in his German hometown.

He also had a serious case of wanderlust.

The 24-year-old began a mission to bike around the world for 365 days. In one year, he pedaled to 22 countries, on four continents, over about 11,184 miles. The ride wasn't without downfalls: His travel partner quit on him. He was overcome with pneumonia and robbed. His grandfather died while he was gone.

Yet Felix says he wouldn't change a thing. Here's what he learned, as told to Huffington Post Travel. (Starck's correspondence has been edited and condensed for clarity.)

It’s better to have a few intense experiences than many superficial ones.

It wasn’t easy to accept, but this is one of the most important things I learned on my journey around the world. Clearly, there is a tremendous amount to see on our beautiful planet, but you just cannot visit all of it -– especially not on a bicycle. If there was a lovely waterfall 200 kilometers north of my route, it meant almost a week's detour. Therefore, I focused on the places I came across and just enjoyed them more intensely.

This trip was planned as a team and turned out as a solo project, which was actually for the best. Although I was traveling “solo,” I spent only a handful of days alone because it is so easy to meet new people. Whether they were other travelers or locals, it didn’t really matter. It is definitely easier to get in touch with people while traveling solo, because you have to. If you don't, your trip won't be fun at all.

I cannot believe how picky I was in the beginning when it came to food: no cheese and no tomatoes (except on pizza), and no olives... the list was endless! In some countries, English is not spoken at all, and if you just point to a dish in the menu, it can sometimes turn out wrong. But there is also a chance the opposite will happen, and it will become your new favorite meal!

A sense of direction can be learned.

It's incredible how fast you get around in cities without a map. There’s a book which says to explore the city like this: walk alternating left and right until you can't go further. I've tried it, and I explored half a city. The sun also serves as a navigation device when you're on a lonely dirt road. 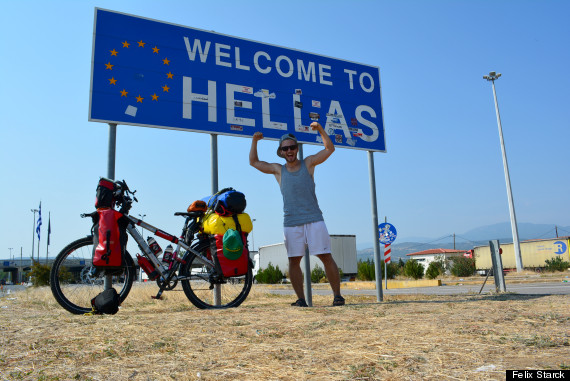 Life begins outside your comfort zone.

The days after I left home were probably the toughest of my life. I never thought this would be so difficult for me. I left behind my perfect life, and the feeling was incredibly debilitating during those first days. Thoughts of quitting were ubiquitous. My brother, who accompanied me at the beginning of the trip, encouraged me to persevere. Together we came up with motivational games: How long can I ride on the side strip of the road? Can I make it over the bridge before the song ends? It helped immensely. I'm so happy that I kept going, because this trip made me stronger.

When you’re tired, you can sleep anywhere.

At first it was a huge adventure to camp in a meadow. I could be caught, and then what? But you lose this aversion after a few days, and it almost doesn't matter anymore where you spend the night. When I reached a certain point of fatigue, I just took my mat and sleeping bag and camped in a park. Reasonable? Probably not, but I haven't had any bad experiences at all. Of course I still prefer a hostel or even a campground, but any port works in a storm!

What probably held me back in the beginning was the fact that I was in constant contact with Germany on social media. Friends at home are online, and you can be online as well thanks to your phone -- almost 24/7! Your old familiar life feels so close, and yet you know you’ll be missing it for a long time. After a while I realized I had to stop checking my friends statuses -- I was living the dream, so I had better start enjoying it. That helped me to let go.

After my travel partner left, I gathered all my courage and went on alone. The result? I met countless people whom I will definitely stay in touch with. When you travel alone, it’s easier to meet people. 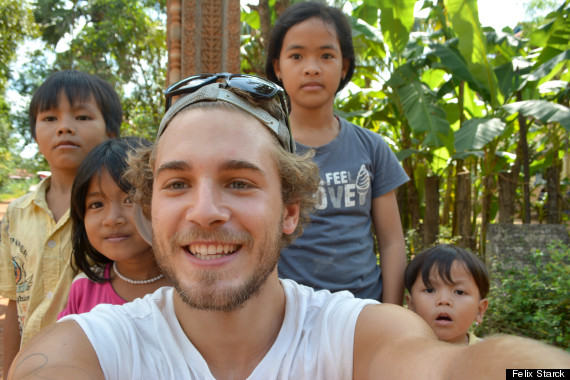 It’s possible to decrease your standard of living.

At home in Germany, I never worried when I got a cappuccino at my favorite café or bought some new Nikes -- it was totally natural. So in the beginning of my trip, it was difficult for me to give up my usual standard of living. At first, I’d go to a café early in the morning and have lunch and dinner in a restaurant. This completely changed after a while, and I survived with minimal costs, but whenever I allowed myself a cappuccino in a fancy café I appreciated it much more!

Very small moments: an amazing trail, making friends with a street dog, a good coffee! I had times where I was waiting for such a moment for days, and when one came, it was the best day of my life. One day I cycled in the north of Cambodia -- it was 110 degrees Fahrenheit in the shade. I was running out of water, and the next city was miles away. Suddenly a truck passed me and stopped. A man got out of the car, gave me a fresh watermelon and some water, smiled and left. These were the moments that kept me going.

Travel is the best university.

I learned more during my trip than in my 14 years of school. Traveling the world and getting to know new cultures and people taught me things that are impossible to learn in school. During my trip I had to use things like economy, sociology, geography and more. Travel isn’t a recognized institution like a university, but it will teach you much more.

Use less planning and more flexibility.

At first I wanted to be on the road for two years, but after a few days I realized planning a trip like that is absolute nonsense. Strangely, you feel much more relaxed if you don't know where you will be in the coming days! Of course you need a direction in which to go, but I just went where I felt like it, and if I liked it, I stayed for a while. The journey is the reward.

Felix is turning footage from his journey into a documentary titled "Pedal the World."

Check out the film's trailer below.

CORRECTION: A previous version of this post misstated the distance of Starck's bike ride as 1,118 miles.