Pop quiz: How do you know that you live in San Francisco (other than by pulling out your phone bill and reading the mailing address)?

(SCROLL DOWN FOR GRAPHIC)

Easy: Before poking your head into an unfamiliar bar, you scope out the bikes parked in front. Too many/not enough fixies? Screw it; let's go somewhere else.

In San Francisco, few things reveal more about a person than their bike. Is it expensive? Is it covered in Bike Coalition stickers? Does it look like it gets daily use? Or is this clearly the same mountain bike its rider has had since their sophomore year of high school?

Any veteran San Franciscan can take one look at person's ride and use every scrap of information it reveals to judge them unmercifully. However, while checking out this bike, someone else will be looking at your bike and judging you in turn. It's the circle of life and it moves us all.

If all of this seems confusing and a bit arcane (not to mention stupid because everyone knows the only true measure of a San Franciscan's street cred is how long they've lived here), don't worry—local graphic designer Tor Weeks has created a handy reference to everything you need to know about The Bikes Of San Francisco.

The handy chart breaks down types of bikes by neighborhood from the beach cruisers of the Sunset to the tricycles of Noe Valley. The picture of a bike locked to a pole stripped of its handlebars, both wheels and seat should be all too familiar to anyone who's left their bike parked outside in the Tenderloin for too long.

Weeks, who lives in North Beach but is in the process of moving to the Mission, is the proud owner of a 1970s 10-speed Univega road bike. "Even though I'm moving to the mission, I have no intention of getting a fixie," says Weeks. "I'm just not graceful or coordinated or daring enough to have a bike that doesn't have brakes."

Posters of The Bikes of San Francisco are available for purchase here. 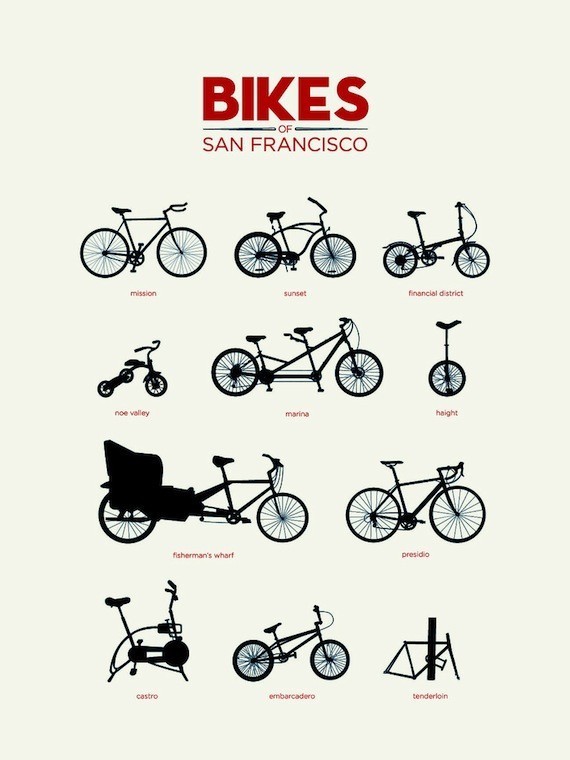