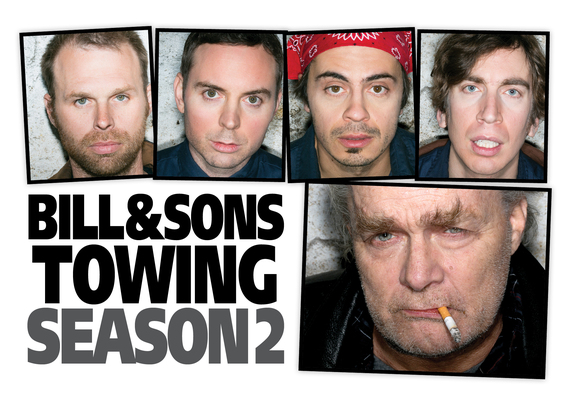 I recently spoke with the series creator Mark De Angelis about season two, his method for finding funny and their new partnership with MyDamnChannel.

Kyle Dowling: I'm thrilled "Bill & Sons" is back; I'm a huge fan of it. There was a rather lengthy amount of time between seasons one and two, however. Correct?
Mark De Angelis: There was! It was a little hiatus. It came down to funding really. But we're back and so excited that people are going to get to see this season. I'm really proud of it.

KD: So have you completely written and shot all of season two?
MD: Yep! All 12 episodes were shot in early December. We're doing sound mixing right now on the back half, but other than that they're all ready to go!

KD: How do you feel they compare to one another? Season one was phenomenal.
MD: I think season two is a better season, honestly. We learned a lot from the first season. In this one we've tried to open up the world a little more so you'll see over this season that we do get out of the garage a few times, which is cool. It's the same guys that everyone loves but we wanted to do some new elements as well. A big storyline in season two is Stewart Sutherland, their rival from the end of season one; he ends up buying a shop down the street from them. He has a great storyline this year, he's just hell-bent on destroying Bill & Sons Towing.

As you know from watching the show, these guys have money troubles, parent troubles and so much on them already, but we thought how can we keep piling on the tension for these guys. I think that storyline adds a great deal of story and funny to it. Another great storyline from this season is that we'll be introduced to Tony's mystery mom.

KD: The woman he was jerking off to in the beginning of the first episode? [laughs]
MD: [laughs] Exactly.

KD: There's always a certain expectation when a show gets picked up for another season. And with that occurrence basically being the first bit in season two, it just solidified for me the fact that you guys have not skipped a beat. With all of the hype, was doing another season at all daunting to you?
MD: That's a great question, man. We did have a lot of wonderful responses to season one so with that comes a certain amount of pressure. When you come back you do want the show to be not only as good as the first season but also better. You want to keep moving the ball forward. I would say from a writing standpoint, we had to try and live up to the episode everyone was talking about last season: the bikini calendar episode. I think that was in everyone's mind when they thought of "Bill & Sons," they think of that episode.

For me, the pressure was "how do we do something just as crazy as that?" That was the inspiration behind the first episode in season two. We always knew we wanted to introduce Tony's mom in the second season, and I thought this was an interesting, out of the ordinary way to do that. I think our first episode does that.

KD: I'd say so. With that bikini calendar episode, I can understand the hype because you guys were able to ride the line so well. It wasn't offensive at all; it was very intelligently done.
MD: Thanks, man! Yeah, her name is Courtney Gilmour, and she's a stand-up comic from Toronto, and she was just amazing. I met with her before, gave her the script and was very upfront in saying there were going to be no surprises. This is the script; it's pretty dark. She loved it! And she has a pretty dark sense of humor so that helped.

KD: Do I remember you telling me you found her on Craigslist?
MD: Yeah actually! I think a friend of Courtney's found our ad and put it under her nose. It was just one of those strange situations where things worked out perfectly. It was incredible timing. We originally had the script say she was missing one of her arms, but Courtney is missing both of hers, so we thought okay let's run with this because we loved her so much.

KD: One thing I noticed in watching season two so far is that the episodes are a bit shorter than season one. Is that something you did intentionally?
MD: That was something we consciously decided on. We wanted to try to make them shorter, hovering around the five-minute mark. I think one of the reasons we did that was for budget reasons. We wanted to do more episodes this year; we're doing 12 instead of 10, so we set out to write shorter episodes in order to do that. And after doing a couple short ones we felt good about them. It was nice for pacing too, having some shorter ones in the middle of the longer ones.

KD: Does that make finding the funny easier or harder?
MD: I let the ideas dictate the length of the scripts. I don't sit at the computer thinking this has to be five minutes. It's more that I just write it and see what happens. Some are shorter and some need some breathing room.

KD: The dialogue on the show is so tight, which lends itself to the question do you ever just let them improvise?
MD: It does seem that way but most of what you see on the screen is all scripted. We certainly do let the guys play around when we're on the floor, but because we're so constrained with time and budget we do the first three or four takes as written and then let the guys go a little bit. We often get fantastic jokes from that. These are hysterically funny guys; we can't forget that. But I would say that about 98 percent of what you see is scripted.

KD: You've partnered with MyDamnChannel for this season. How did that come about?
MD: We met Rob Barnett, who runs MyDamnChannel, back at Just For Laughs about three years ago. We were actually meeting about "Bill & Sons" and we hadn't even shot any of it yet. He really took to the project. We kept in touch over the years and one thing we wanted to do with our second season was make a bigger push in the United States, so we approached Rob to our partner. It all just fell into place. MyDamnChannel has such great content and we really appreciate their help.

KD: Also, they have such a loyal following, and if they promote you guys and support your work, their followers are likely to as well.
MD: Exactly, and that's really what it's about when you're on the web. No one on the web has the marketing budget that TV does and you have to depend on word of mouth. 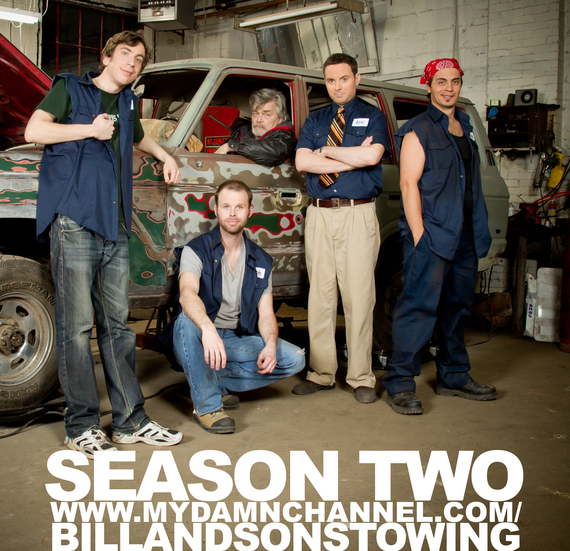 KD: What are you most excited for with season two?
MD: I'm most excited for everyone to see this battle with Stewart Sutherland. It'll be great to see the guys and how they deal with this challenge. The actor who plays him, Sandy Jobin Bevans, he's a phenomenal Second City Toronto guy, and he's been such a wonderful addition to the "Bill & Sons" cast. And I just love that Stuart is a straight-up business guy who has it all together but when he starts battling these fuck ups his world just crumbles. It'll be a lot of fun. I'm also excited about the storyline with Tony's mother.

KD: All of the characters have such distinct personalities, and I'm curious if you have a character that you enjoy writing the most.
MD: I've always been partial to writing the Eric character, just because he's the fish out of water. He doesn't really fit in there and it's so much fun to write from that point of view.

KD: How long have you been working with The Imponderables?
MD: Probably over the past five or six years. My producing partner, Charles Ketchabaw, and I have done smaller projects with them such as awards shows or comedy shorts. We always liked working with each other and always wanted to work on something that was a bit bigger. Once the chance to build something around them came along we knew we had our shot. I'm so thrilled we get to work with these guys.

KD: Without giving away any details, are you brewing any ideas for a third season?
MD: When people see the season finale I think they'll get a pretty good idea of what might be in store for season three.

For more by Kyle Dowling, visit his site.