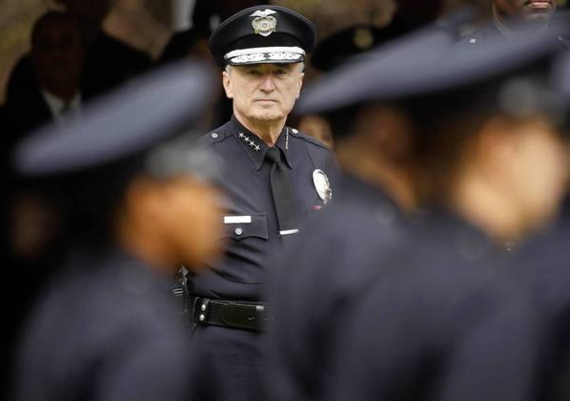 For nearly three years we waged a small, and at times hopeless, war against Bill Bratton. Not just Bratton the man, but Bratton the legacy. The parents who'd lost loved ones under Bratton's NYPD in the 90's--like Anthony Baez, Nicholas Heyward Jr., and Anthony Rosario--were some of the first to speak out. We all took to city hall steps in December of 2013 to protest Bratton's appointment by incoming mayor Bill de Blasio. New Yorkers of all stripes fought him at the city council, at colleges, and (how could anyone forget) in the middle of Times Square. We knew that Bratton the sequel was based on an original that had launched an era of mass criminalization.

Bratton is known internationally as the architect of Broken Windows policing, the controversial policing philosophy which advocates crackdowns on low-level quality-of-life offenses. He also increased the firepower of police-issued semi automatic guns and even lashed out at a parent group during a town hall in the Bronx in 1995, calling them a "bunch of fools." It was this hard-charging, zero-tolerance approach that permeated from Bratton's person to his ideas on policing.

And yet, his grand re-welcoming under an allegedly 'progressive' administration ignored this history. He was hailed as an innovator and someone who, his supporters in political circles and the media insisted, had saved a crime-ridden New York City. 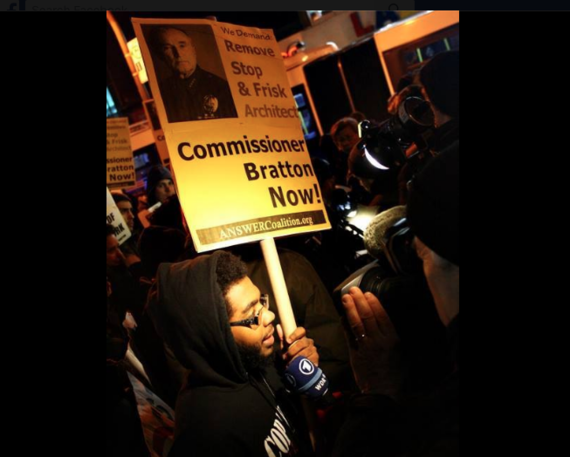 A sober look at his role in city history reveals an expansion of policing power that today is the heart of a national conversation. His other major policing contribution, CompStat, led to the numbers-based policing methodology that many, including a more politically calculated Bratton, said the city should move on from. This policing management system ensured that public safety always made crime stats the goal. But there were other numbers: a 1996 Amnesty International report noted the number of people shot by the NYPD or that died in custody went up in Bratton's first year. The number of civilian complaints also exploded.

CompStat also led directly to the quota system that ensures cops will constantly stay in constant contact with communities of color. Broken Windows and CompStat were said to have reduced crime, but what they did was ensure an expanded number of police interactions. Along with Broken Windows, this insured a very crude and physical form of surveillance. For business interests across the city, it also provided a sweeping mechanism that could displace undesirable segments of society with arrests and intimidation. These ideas were exported to other urban American cities. Quite literally, Bratton laid the foundation for many of the problems we see with policing, not just in New York but across the country.

Of course supporters of Bratton, by far the most powerful political figure in the city's modern history, will call this blasphemy. His conservative proponents say that he made the city safer, despite the fact that no evidence connects Broken Windows to the crime decline of the 90's. Meanwhile his liberal defenders insist he lowered stop and frisk under de Blasio, ignoring the fact that he in fact helped to usher in the rise of stop and frisk--and that today's self-reported declines began under Ray Kelly, his predecessor. 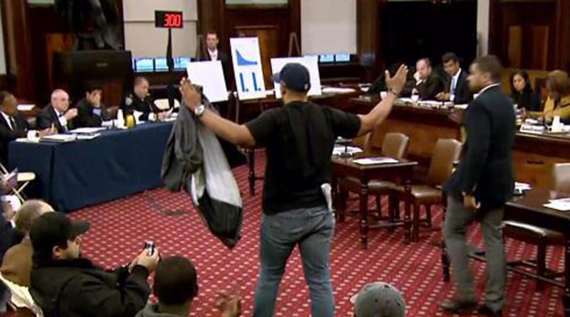 It took the rise of the Black Lives Matter movement to create a window of debate around policing, which included a challenge to the gospel of Broken Windows. Bratton doubled down on his signature policing theory and at times seemed wildly out of touch for 2016: falling into bouts of reefer madness, bashing rappers as 'thugs' and wholeheartedly embracing the racist analysis of the five-decades-old Moynihan Report of the 1960's. There was also the huge corruption scandal led to the federal indictments of top NYPD officials, many who'd been promoted by Bratton while under investigation.

Still, Bratton towered over the city. During his second stint he ran roughshod over the city council, squeezing an extra 1,300 cops out of them last year. He twirled the mayor around his finger. His exit from city hall this week was a media bonanza, akin to the retirement of a Michael Jordan or Peyton Manning of policing. 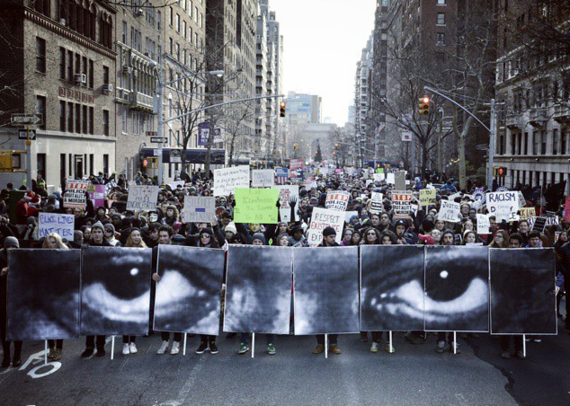 Eric Garner's death sparked massive protests all across the city

However, the people most affected by his ideas--street vendors, subway performers, the homeless, to name a few--have been given little say in his legacy. The 'disorder' Broken Windows sought to tame were actual people. When Staten Island's Eric Garner argued with cops who ultimately killed him, he alluded to the interactions he'd had with cops before. "You're always messing with me!", he complained. The 43-yr old father and grandfather had been arrested dozens of times for low-level offenses. Thousands of New Yorkers who've been similarly steamrolled by Bratton's Broken Windows, can empathize. The interaction that led to Garner's death happens everyday.

There, voices, however, are not included in the summaries on Bratton's legacy. Liberal nonprofits and civil rights organizations took had mixed reviews of of Bratton, calling his second term "complicated" while still crediting him for changes to stop and frisk. This is a disgraceful position that ignores the racial and political turmoil that accompanied his 31 months in office. Then there was the local media, an impotent group of stenographers that loved him every minute he was here. Bratton was, after all, the most media-savvy police leader in America. All three major city newspapers, the New York Daily News, the New York Post and the New York Times, praised him in their editorials on his departure. 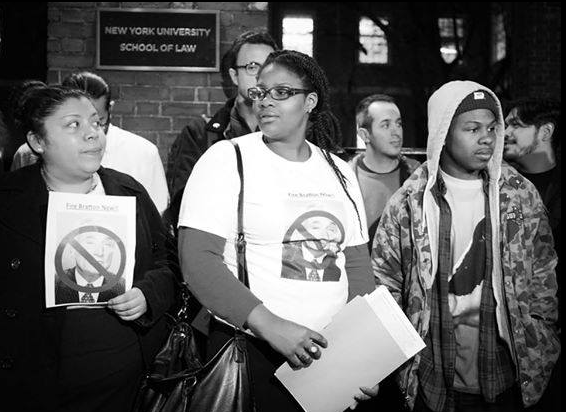 Bratton saw protests up and down his second tenure (Photo: Metro NY)

Amid all of the Bratton love letters in the media, one particularyly hagiographic roundup of Bratton stood out. It was that of a former cop and prosectur turned academic, Eugene O'Donnell, who described Bratton's departure as "the fall of Saigon for American policing" (NY Daily News, 8/2/16). It was something like that when Bratton left after the press conference announcing his resignation. With dozens of protesters (who've set up an indefinite encampment at city hall park to protest the NYPD) outside city hall gates yelling him, there was a surreal feel as he walked out of city hall for one of the last times. It was if Bratton could walk out and his ideas with him.

It's never that easy.

His newest idea, like 'predictive policing' is already here. Bratton grew the size of the department, scored new equipment and technology and created two new anti-terror and and anti-protest units: the Strategic Response Group and the Critical Response Command. Incoming commissioner Jimmy O'Neill is a Bratton disciple. And while the public relations attempts at promoting 'community policing' or 'neighborhood policing' will be pushed forward by O'Neill, Mayor de Blasio promises a continuation of Bratton's idea. He is now the Broken Windows torchbearer. The fight continues with he and O'Neill's NYPD as well as the city council that generously funds it to the tune of over $5 Billion dollars a year.

And now they no longer have Bratton, the rockstar of policing and bulldozer of vulnerable communities, to stand out in front of them. 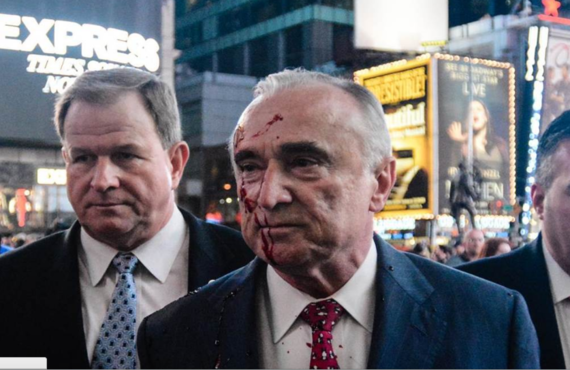 Fake blood splattered all over Bratton's face in December of 2014, at the height of protests in the city