Bill Burns is a Canadian artist who no longer fears the art establishment. In a new exhibition at Mulherin + Pollard titled, "A Brownnoser's Story," the artist is a troublemaker, biting the hand that feeds him. A chalkboard in one corner of the gallery lists the names of "Those who have helped me", "Those who I still hope will help me", and "Those who have wronged me." This is not a joke, however, since names of prominent critics are named! It's a bold move, and it is refreshing to see such an honest moment in a contemporary art exhibition. In a previous interview with Canadian Art, the artist spoke of detailing "the slings and arrows of life in the art world," which we discussed with Bill over the phone a few days ago. See the results of our interview, along with a slideshow of Bill's work, below. 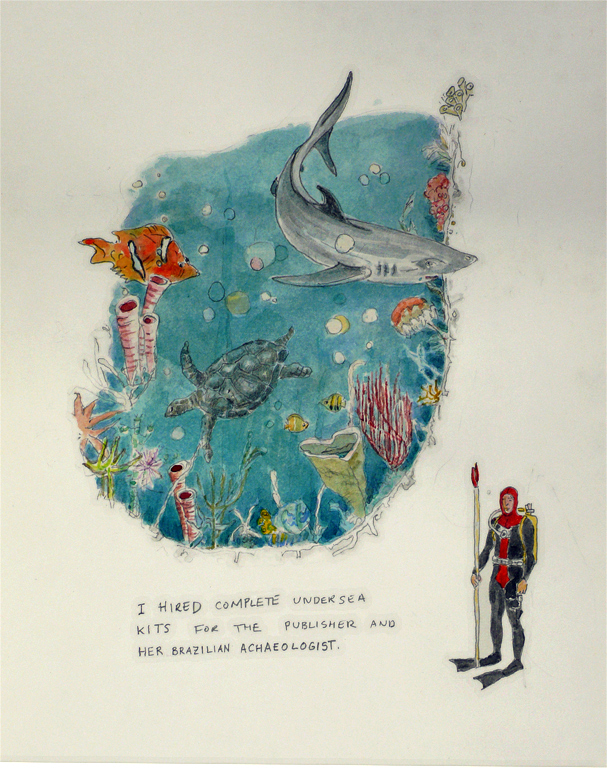 HuffPost Arts: Can you tell me about how you came up with "A Brownnoser's Story"?

BB: It’s an been an autobiography / memoir I’ve been working on for the past few years, and then I started developing a series of drawings in tandem with the project. The drawings help move the story along sometimes. It’s all about my adventures and misadventures in the art world.

HuffPost Arts: Why did you decide to use watercolor as your medium?

BB: It appealed to me because it’s the medium of choice for historians, and my work is engaged with animals and nature, so I wanted to try it on as a trope. Also, it’s something that I can do. You know how people go to art school for a long time and then they come out and they can’t do anything? This is something I can do.

HuffPost Arts: You went to Goldsmiths, right? What was it like when you were there?

BB: It was oriented toward conceptual art but also has its nose planted in the art market. It’s a difficult, bipolar project. When I was there, it was the moment the English art scene was becoming a real market force, and for a conceptual artist it was an ideal place to be; we understood that we’re all players in the global market.

HuffPost Arts: Everything is macro now, isn't it?

BB: It’s unbelievable. The only photograph in the exhibition is a redux of a Brion Gysin and William Burroughs photograph. That was also one of the things I was looking at – this hyperbolic marketplace now versus the days of Gysin and Burroughs, when there was a village of artists, poets, and intellectuals would get together. It seems like a very different way of seeing the world. Kerouac is also a big inspiration for me.

HuffPost Arts: You have this chalkboard on one side of the exhibition space that lists the people who have helped you, those who have wronged you, and those you’re still holding out hope for… Jerry Saltz is in two of these.

HuffPost Arts: How did you come up with that concept?

BB: I think artists make these kinds of lists. I don’t think our trade is that much different from other people’s business, but there’s more secrets between private and public in the arts. I felt like I don’t need to hold my tongue about certain things anymore. I can say these things… It’s funny to have the truth out there.

The funny thing about the art world is that often it’s the same people who have helped you who have also wronged you. And the artist’s ego is always susceptible to damage.