WASHINGTON -- Many Republican presidential contenders say the question of whether to keep the Confederate flag flying outside South Carolina's Statehouse is a matter for South Carolinians to work out among themselves. Democratic candidates like Hillary Clinton tend to say that the flag -- a symbol of racism and oppression to many -- ought to come down, especially in the wake of last week's racially motivated mass shooting in Charleston. (Clinton has not made an official statement about South Carolina's flag since the shooting, but in 2007 she did say she "would like to see it removed" from the Statehouse grounds.)

But the former secretary of state, who is now running for president, is not the first Clinton to weigh in on the matter of the Confederacy. The state flag of Arkansas sports 25 white stars and four blue ones. And in 1987, while serving as governor of Arkansas, Bill Clinton signed a bill affirming that one of those blue stars is there in honor of the Confederate States of America. 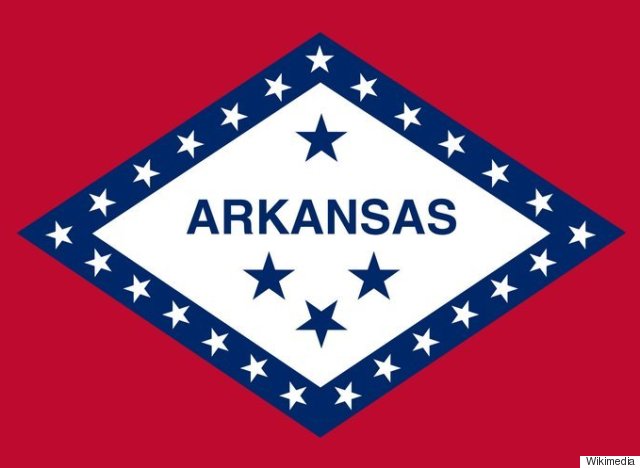 A few words here about the Arkansas state flag, which -- like most flags -- is laden with symbols and references that may not be immediately apparent. According to the Arkansas secretary of state, the flag's original design, approved by the state legislature in 1913, had only three blue stars, not four. The three blue stars were meant to represent a number of things, including the year of the Louisiana Purchase (1803) and the fact that "Arkansas belonged to three countries (France, Spain, and the United States) before attaining statehood." Legislators added a fourth blue star in 1923 to acknowledge Arkansas' membership in the Confederacy from 1861 to 1865.

The state's General Assembly reaffirmed the parameters of the flag in a 1987 act that Clinton signed. Among other provisions detailing the flag's features, such as its colors and shapes, there was a line that read, “The blue star above the word 'ARKANSAS' is to commemorate the Confederate States of America.” The act met no significant opposition at the time. In the same legislative session, the assembly also settled on an official state song.

Arkansas observes a Confederate Flag Day, which is celebrated together with Arkansas Confederate History and Heritage Month and Confederate Memorial Day. Per state code, it is observed on the Saturday immediately preceding Easter Sunday. In annual gatherings outside the Arkansas Statehouse, participants can "attend and bring examples of the variety of flags used by Arkansas units and of the Confederate government and its army during the War," according to the Log Cabin Democrat, an Arkansas newspaper.

Clinton did not publicly object to Confederate Flag Day during his time as governor. The holiday is still being observed: A photo posted to the website of the Sons of Confederate Veterans in Arkansas shows this year's event. 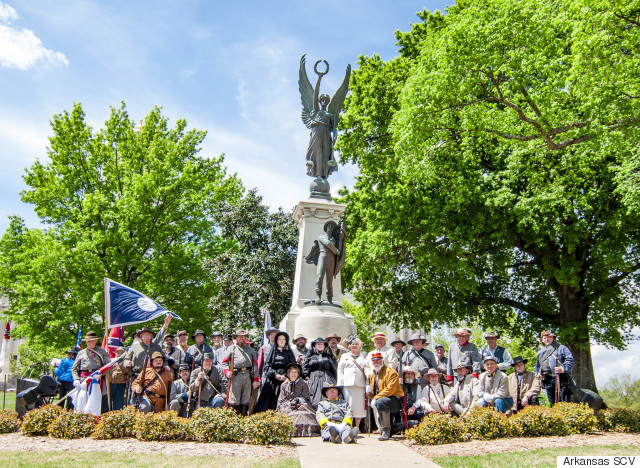 Clinton's affirmation of Arkansas' history didn't stop him from criticizing how other states honored the Confederacy, however. In 1992, Clinton called on the state of Georgia to remove a Confederate design from its state flag. Georgia lawmakers had added the Confederate symbol to Georgia's flag in the 1950s amid a climate of intense and overt hostility to the idea of racial integration. (Georgia finally took the Confederate battle flag off its state flag in 2001.)

Clinton's acceptance of his state's roots also didn't do much to endear him to South Carolina voters, at least judging by a 1992 campaign stop at the Southern 500 stock car race in Darlington, South Carolina, where numerous Confederate flags could be seen atop car antennas in the infield. While Clinton "worked his way up pit row shaking hands with smiling and friendly drivers," a strikingly different scene took place in the stands, The New York Times reported:

And so, when the fact of Mr. Clinton's presence became known in the minutes just before the start of the race, there came the clash. First the roaring chants from the stand: "We Want Bush! We Want Bush!" and "George Bush! George Bush!" over and over. Mr. Clinton, of course, ignored that, and continued on his way, mounting a platform on a flat-bed truck to open the race with the traditional line, "Gentlemen, start your engines."

In the frame, he uttered that line with his customary ease. Outside the frame, no one heard it; the candidate was drowned out by a long, lusty chorus of boos.

A spokesperson for Hillary Clinton's presidential campaign did not immediately respond to a request for comment.

CORRECTION: Due to an editing error, a previous version of this article incorrectly defined the meaning of a star appearing on the Arkansas state flag. One of the flag's four stars represents the 1803 Louisiana Purchase, and not the year Arkansas attained statehood.

As Governor, Bill Clinton Kept 'Confederate' Star On The Arkansas Flag
Hillary And Bill Through The Years