Clinton, who met Romanoff in 1992 when he was a student at Harvard, alluded to Romanoff's career in the Colorado legislature to argue that he gives the party "[its] best chance to hold this seat in November." Clinton did not mention Bennet, who has received strong and consistent support from the White House.

Romanoff the former Speaker of the Colorado State House, announced his Senate bid last September after discussing potential administration jobs with the White House in the event that he stayed out of the race. President Obama endorsed Bennet shortly after Romanoff announced his candidacy.

Romanoff is the first Democratic Senate challenger to receive Clinton's support in a primary this season. In Clinton's home state of Arkansas, the ex-president publicly endorsed incumbent Democrat Blanche Lincoln over challenger Bill Halter. In Pennsylvania, Clinton worked with the White House to lure challenger Joe Sestak out of the Senate race against incumbent and former Republican Arlen Specter.

Romanoff was an early supporter of Hillary Clinton's 2008 presidential campaign.

According to most public polling, Bennet leads Romanoff by double digits among likely Democratic voters. He also holds a commanding fundraising advantage.

Romanoff, however, has ridden the support of long-time party activists to victories in Colorado's Democratic party caucuses.

The Colorado primaries will be held on August 10.

Clinton and a young Andrew Romanoff meet in 1992: 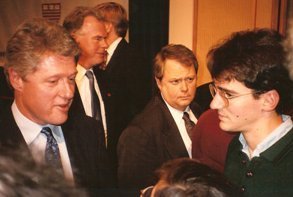 I first met Andrew Romanoff in 1992, when he was a student at the Kennedy School of Government and I was a candidate for President. Four years later, I was running for a second term, and he had just been elected to his first -- as one of Colorado's representatives on the Democratic National Committee.

I was proud to carry Colorado in 1992, but you should be even prouder of what Andrew Romanoff did to turn the state blue. He worked harder than anyone in Colorado to put Democrats in positions of power -- and to use that power to benefit every single citizen.

Even more important, Andrew took on Colorado's biggest challenges and made enormous progress. As the first Democratic Speaker of the House since 1976, he:

* Put together an Economic Recovery Plan to bring good jobs to Colorado and balance the state budget.
* Passed the largest investment in school construction in state history -- a billion-dollar plan to repair, rebuild and modernize schools, especially in rural Colorado.
* Protected Coloradans from the threats they face every day: insurers who deny their claims and refuse to honor their policies, scam artists who prey on seniors and bilk them out of their life savings, polluters who destroy the environment and expect somebody else to pay for the damages.

In 2008, the editors of Governing Magazine honored Andrew as "Public Official of the Year." They recognized in Andrew the same qualities that the National Conference of State Legislatures, the Council of State Governments, and more than 50 other organizations had already seen -- integrity, courage, compassion. Simply put, Andrew Romanoff is one of the best legislative leaders in the United States.

Colorado is far better off today because of Andrew Romanoff's leadership. America will be too.

As a Senator, Andrew Romanoff will continue to stand up to special interests and fight for working families. We need Andrew's leadership in Washington -- especially now, when so many Americans are losing so much. "It is not enough," as Andrew put it at the Colorado Democratic Assembly last month, "to put a President of real talent and vision and leadership in the White House if the same qualities are not matched at the other end of Pennsylvania Avenue."

Andrew won the state assembly by 21 points. With your help, he'll win the primary and the general election.

Andrew brings to this race both an extraordinary record of public service and an extraordinary capacity to lead. I believe that those assets, as well as his deep commitment to Colorado, give him the best chance to hold this seat in November.

I support Andrew Romanoff, and I hope you will too. Please make a generous contribution to his campaign today.