Coincidence? Perhaps, but either way, the White House has good reason to tout Clinton's high-profile advice given the popularity of the former president, evident in both Hart's focus groups and in more rigorous national-media opinion polls.

Consider the results from three relatively recent national surveys which show the former president enjoying much stronger personal ratings than the current one. As the chart below shows, Obama's favorable ratings in recent months have been 9 to 15 points lower than Clinton's on surveys conducted by AP, CNN and Gallup (data via Polling Report). 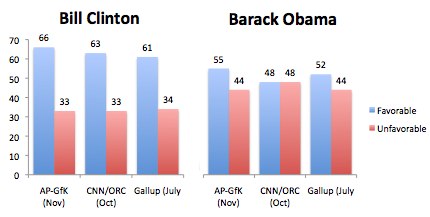 Bill Clinton's ratings, as measured by Gallup and CNN/ORC, have also risen steadily since his final year in office, although they dipped significantly during the 2008 campaign between Obama and Hillary Clinton. Still, the former president's favorable rating is now as high or higher than at any time over the past ten years. 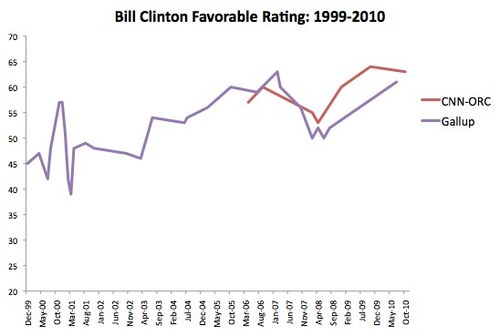 Focus groups are not "scientific," representative samples of larger populations, but in this case, Hart's group does provide a few clues to the basis of Bill Clinton's rising popularity, a combination of nostalgia for the better economic times of the late 1990s and an appreciation of the former president's communication skills and "common-man connection." The two-hour discussion among a dozen voters from the Philadelphia suburbs was sponsored by the University of Pennsylvania's Annenberg Public Policy Center and made available to reporters via streaming video.

About halfway through the discussion, Hart asked the participants for one-word assessments of various public figures. The words offered for Bill Clinton were "smart," "savvy," "intelligent," "statesman" and "brilliant but flawed." One participant responded by asking, "Can we have him back?"

At that point, Hart asked the participants to stand up if they wanted to have Clinton back. Eight stood, including two Republicans. Here are four of their comments -- the first and last are from Republicans:

I think the country was running well when he was here and I think everybody liked him.

Because I thought he was a great president. He did a lot for the country.

I think he was probably one of the best presidents we ever had, and he was extremely efficient and even looking back now, I think, in the eyes of many people, he's actually become more respected over time.

Unlike the political commentariat in Washington, not a single participant offered the word "triangulation" in reference to Clinton, but several did praise his willingness to compromise. "He really understood how to get things accomplished in the time he was in," said one, "so [his] idea would get passed in the compromise version that would work for that period of time."

Hart then pushed harder. Would they object to replacing Obama with Clinton? The group's enthusiasm was sharply diminished. "I'd like to add Clinton," said one of the women, to much apparent agreement.

Notably, when Hart later asked the participants which U.S. president Obama reminded them of, not a single participant offered Clinton's name. Why not?

"He doesn't have that common-man connection yet," one of the women responded.

"How many agree?" Hart asked. Six hands went up.

As I wrote earlier in the week, there is always a risk in reading too much into a single focus group involving just a dozen people. But these comments help explain why nearly a third of Americans now rate former President Clinton favorably, and why the Obama administration wants to "add Clinton" as a high-profile supporter and informal advisor.