Former President Bill Clinton joked as he accepted an award Thursday night, thanking supporters of women's causes for trying to offset the mistakes of men.

Joking aside, Clinton accepted the Champion of Peace award at the Museum of Modern Art in New York City. Women For Women International, an organization that helps women survivors of war to rebuild their lives, presented him with the honor at its annual gala.

Clinton received the award for supporting women and girls through the Clinton Global Initiative. The initiative and its partners have created financial independence for women and girls in third world countries, worked to reduce maternal mortality and helped create sustainable careers, among other efforts.

"[Clinton's] personal passion and commitment on the issue has touched many hearts and led to much action and his dedication to bringing real change has led to solid impact on women's wellbeing through corporations and NGOs action," Women for Women states on its site.

The former president called for both the continued empowerment of women as well as "the liberation of men" from their role as aggressors throughout history, urging a new cultural understanding of what power -- and empowerment -- looks like.

"What [we're] trying to do here is change the behavior of history," Clinton said. "If we do it together, we'll still make some mistakes, but we'll still be stumbling in the right direction."

Clinton, who was accompanied by his daughter, Chelsea, spoke of the strong women in his own life. He applauded the organizers and the attendants for the work that has been done, but pushed for progress in global health and education. He cited high HIV rates in women, maternal safety, and access to education as just some of the many inequalities still facing women.

Zainab Salbi, the founder of Women For Women International, presented the award to the former president during the annual gala dinner. She was honored by Clinton during his administration for her work in Bosnia.

Salbi, an Iraqi refugee, founded the initiative in 1993 while working with women in wartorn Bosnia and Herzegovina. In its 18 years, the organization has distributed more than $103 million in direct aid, micro credit loans, and has impacted more than 1.7 million family members around the world.

The Champion of Peace Award is given annually by the organization. Past recipients have included musician Mary J. Blige and Jennifer and Peter Buffett. 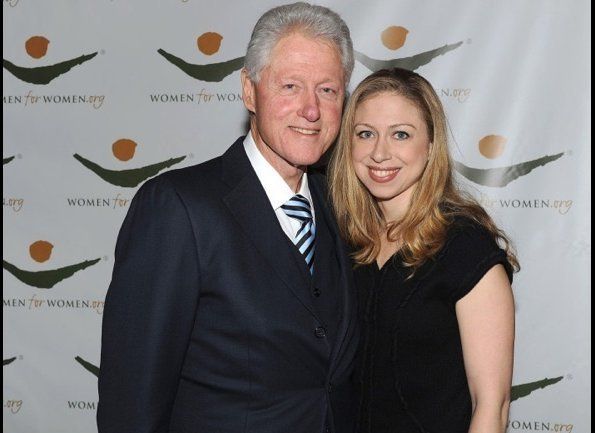 1 / 9
Bill Clinton
Former President Bill Clinton received the Champion of Peace Award at the <a href="http://www.womenforwomen.org" target="_hplink">Women For Women</a> International dinner and gala Nov. 17 at the Museum of Modern Art in New York City.
Getty Images