Opening the conference, Allred criticized actress Phylicia Rashad, who played Cosby's wife on "The Cosby Show," for her recent statements in support of the 77-year-old comedian. In response to Rashad's comment that the public should disregard Cosby's accusers and "forget those women," Allred said:

Phylicia, I vow to you that I will not forget these women, because women matter. They deserve respect and dignity. Phylicia, you should be supporting these women rather than joining Cosby's paid "attack dogs" who are trying to undermine them in any way they can.

Accompanying Allred were three women introduced as Linda Kirkpatrick, Lynn Neal and "Kacey." Each woman read a statement, describing their experiences with Cosby in great detail, but declining to take any questions. The stories all followed the familiar patterns of grooming, drugging and then assault that have characterized all of the accusations against the famous comedian.

LINDA KIRKPATRICK
Kirkpatrick claimed that she met Cosby at a tennis tournament in Las Vegas in 1981, where he invited her to see his show. She alleges that he offered her a drink during a party in his dressing room, after which she blacked out and came to to find Cosby on top of her, kissing her forcefully. Kirkpatrick says that she went back to the show the following night after Cosby apologized, and that he aggressively kissed her and tried to take his advances further despite her insistence that she was not interested in a sexual encounter. She managed to leave before any further assault occurred. 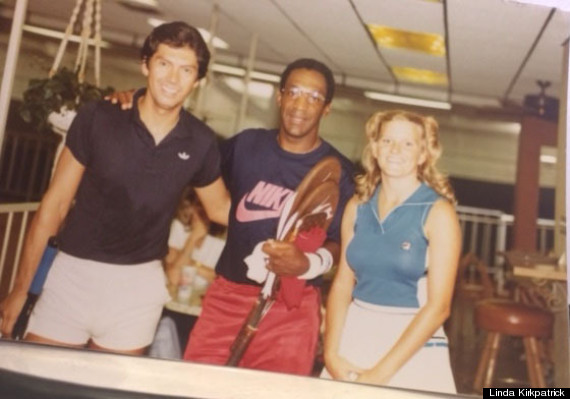 Linda Kirkpatrick with Cosby and her tennis partner

LYNN NEAL
Neal said that she met Cosby while she was working as a therapist at a health club where he was a regular client. Cosby allegedly invited her to see his show, where he offered her drinks and would not let her eat. After the show, Neal says she began feeling "disoriented and confused." She claims that Cosby then walked her to his dressing room where he raped her.

"He built my trust by pretending to be a friend," Neal said in her statement. "He drugged and raped me. He betrayed my trust and took advantage of me."

KACEY
Kacey, who did not want her real name shared and grew emotional as she read her statement, alleges that Cosby drugged and assaulted her in 1996 while she was working for Tom Illius, Cosby's agent at the William Morris Agency. In a statement provided to press, Kacey revealed that she had a friendly working relationship with Cosby and considered him a "father figure or favorite uncle." She and her children had dined with Cosby and other colleagues before, and she took calls from him at her home. During a one-on-one meeting at the Bel Air hotel where Cosby had invited her to discuss her future career plans, Kacey claims that he insisted she take a "large white pill" to help her "relax," after which she remembers nothing until she woke up in a bed next to Cosby, who was naked under a bathrobe.

The Huffington Post contacted Cosby's representatives for comment about these allegations, but had not heard back at the time of publication.

In a Q&A after the statements were read, Allred addressed legal options that she believed could be enacted given that the statute of limitations has passed on all known cases.

“I have been in contact with Mr. Cosby’s representatives in regard to the two challenges or invitations that I have offered to him. One was that he invite all the women to sue and he agree that he would not assert his statute of limitations.”

She pointed to the actions of Alan Dershowitz, the famous criminal lawyer who was recently named in an alleged underage prostitution and sexual abuse scandal who invited his accuser to sue, with the stipulation that he would not invoke the statute and allow the case to proceed.

Alternatively, Allred believes that arbitration or mediation -- a closed door, confidential negotiation between Cosby, his accusers and a retired judge would be an attractive option for closure.

Neither option had been accepted by Cosby’s team.

Allred ducked repeated questions as to how many anonymous victims had approached her, but alluded to their existence.

“I have no doubt that there will be efforts to undermine any and all who come forward,” Allred said.