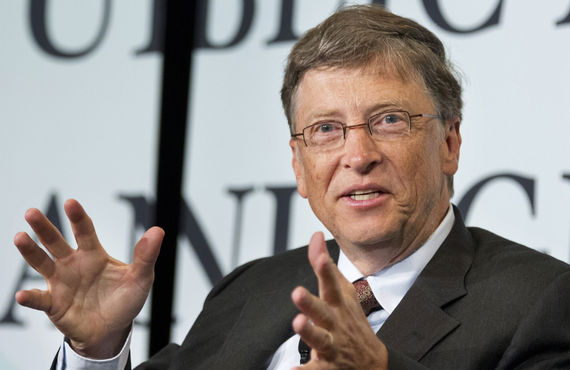 ImpactAlpha.com -- When Bill Gates agreed a couple years ago to put a small piece of his personal fortune into a fund that invests in companies serving low-income customers in India, he invited the fund managers to return with a plan to scale up their investments and their social impact.

The fund managers recently took such a plan to Gates, and have again come away with not only a check, but an endorsement from the world's richest man. Gates also co-chairs the world's biggest philanthropy, but his new personal investment in the Capria Accelerator Fund is about business, not charity.

"I've been a long-term proponent of the view that any of society's problems that can be solved with market-based solutions must be solved that way," Gates said in a statement. He said he was excited to invest in Capria Accelerator "as a means to scale global efforts around impact investing."

Capria Accelerator is the second fund of two former software executives, including Will Poole, who once worked for Gates at Microsoft Corp. (The other manager, Dave Richards, worked for rival Real Networks and once testified against Microsoft in its antitrust trial.) Their first fund, Unitus Seed Fund, has made nearly two-dozen early-stage investments in companies providing education, health care and livelihoods for low-income Indians. The seed investments help the companies bridge "the pioneer gap" between small startup financing, often from friends or family, and venture-capital style institutional capital.

The first fund tried to prove that businesses that meet the basic needs of emerging consumers can be compelling investments. Domestic consumption, including education and health care, is relatively immune from global market swings.  "Businesses that service those fundamental needs, as the population grows and grows in prosperity, are going to do well," Poole says. "When we talk about emerging economies with young populations, simply the passage of time will cause those populations to gain purchasing power."

But rather than just raise their own second fund, Poole and Richards set out to catalyze capital for such enterprises more generally. That meant supporting fund managers focused on helping build companies targeting low-income populations in developing countries. And that required attention to obstacles faced by first-time fund managers who, without a track record, struggle to find investors and close deals.

Capria Accelerator will invest in such first-fund managers -- taking a stake in the general partnership -- and run them through a month-long training program and stake them to some capital to close their first few deals. That enables them to approach potential limited partners with both an anchor investor and a portfolio already under construction. Capria generally invests between $250,000 and $500,000 in each new fund manager.

The first three managers, one each from east and west Africa and one from Latin America, will arrive in March for a month of training in Seattle. They will prepare their first deals and get introduced to Poole and Richards' extensive network, though probably not to Gates. The three fund managers were selected from among 66 applicants from 24 countries; Capria is selecting a second cohort for the fall.

"These guys have been working at establishing their funds for some time. They're tenacious guys, because it's tough going," Poole says. "Just like entrepreneurs building businesses, they are building financial services businesses"

Pule Taukobong, co-founder of CRE Venture Capital in Johannesburg, says he wishes Capria had been around three years ago as he struggled to raise his first fund. In mid-2013, Taukobong quit his banking job in New York and spent eight months fundraising. He came away with only $20,000 -- less than his expenses. So he cashed out his pension, sold his house and bought stakes in eight companies on his own. He claims those companies have gone on to raise more $25 million in follow-on financing, generated $8 million in revenues and created 600 jobs.

Now, he says, he has the track record to raise a seed-stage fund to invest in technology entrepreneurs in sub-Saharan Africa, including at least one-quarter women. He closed an initial round of $2 million last year and hopes to finish fundraising next month.

"With Capria we would have had capital to start and been able to show a real portfolio," Taukobong said. "Not every fund manager should have to sell his house or liquidate his retirement fund, or you going to limit the number of people willing to do that."

There's some evidence that the conventional wisdom about first-time impact funds may be wrong. A benchmarking study by the Global Impact Investing Network and Cambridge Associates found that smaller funds tend to outperform larger ones, and first funds tend to be smaller. The 13 first funds under $100 million, the survey found, had a pooled rate of return of 12.9%. well above their comparable peers.

Poole pitches the Capria Acclerator fund as "market rate" but with an elevated level of risk. That's where the fund's impact thesis kicks in. Capria's other investors include the Crystal Springs Foundation, the Sall Family Foundation and Mohandas Pai and Ranjan Pai, prominent Indian investors and entrepreneurs. The size of Gates' investment was not disclosed.

"Most people will still think of the risk of a first-time fund manager in the emerging market and they will not make this decision on purely economic basis," Poole says.

Capria expects to raise about $10 million over the next five years. Poole claims that may catalyze as much as $500 million in capital for businesses meeting the basic needs of low-income customers with higher-quality, lower-cost goods and services. The math is somewhat speculative, based on 10 funds that raise $10 million for their first funds, $25-30 million in follow-on funds, and bring other investors as well.

But Bill Gates was sold. "Bill is all about scaleability," Poole said. "That was my pitch to him."

Disclosure: ImpactAlpha has a consulting relationship with the Bill and Melinda Gates Foundation.