During the "New Rules" segment, the host pointed out that the star design beside Palin's head could send a message that she wasn't intending to send.

"The designers of the logo for Sarah Palin's PAC should talk to the guys who draw Goofy," Maher said. "They can explain that when you see stars it doesn't really mean you're looking to the future. It means you just walked into a stop sign." 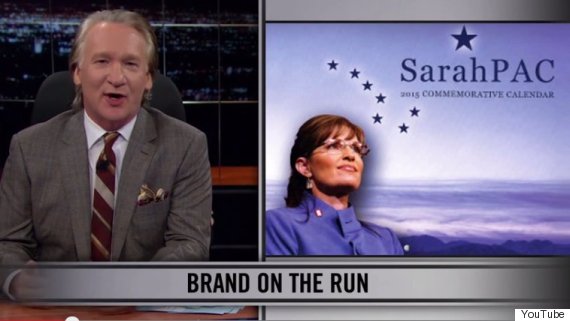 In the same segment, Maher finds problems with Hillary Clinton's campaign logo, makes fun of a toaster that can print a person's face on a slice of bread, and slams Bill Cosby yet again.

1 / 13
Wayne Brady
This July, Wayne Brady went on <a href="http://www.youtube.com/watch?feature=player_embedded&v=LpGgQX9frSY">Aisha Tyler's podcast</a> to discuss his disapproval of Bill Maher's description of President Obama as "<a href="https://www.huffpost.com/entry/wayne-brady-ill-gladly-slap-shit-bill-maher-obama_n_1659234">Your Wayne Brady</a>," saying he would "Slap the sh*t" out of the comedian.
Alamy