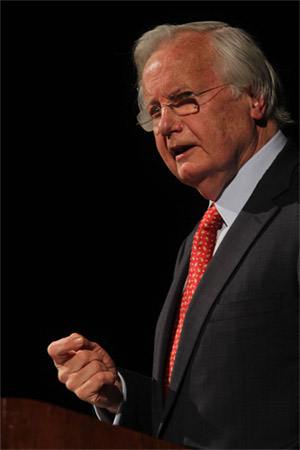 Two days after Arizona Representative Gabrielle Giffords was severely injured in a Tucson shooting, renowned journalist Bill Moyers found himself sitting in a radiology lab awaiting an MRI for a torn muscle. The only other person in the waiting room was a woman around his age. They made small talk and occasionally watched the muted TV tuned to a film filled with bloody car crashes and shootings.

At one point, the stranger asked Moyers whether he was optimistic about America. "Sometimes I sense that it's sinking like a great ship and many of us are not going to make it off," the woman said.

Struggling to answer her, Moyers dodged the question until the technician called him. But since that day, Moyers says he has regretted not answering her question.

Moyers wove this story throughout his lecture to a full house at the Lyndon Baines Johnson Library & Museum Tuesday night, inaugurating the Tom Johnson Lectureship series. Moyers served as President Johnson's Special Assistant from 1963-1967, including two years as Press Secretary.

"I'd like to give the stranger in the waiting room a more considered reply, and Tom [Johnson] has given me the chance this evening. This is what I would say: I am an optimist because human beings are capable of selfless action and goodness toward others," Moyers said.

He shared a story he says he hasn't been able to forget from the January 2011 floods in Australia. When a rescuer made his way to a woman and her two young sons trapped in their car, the older son said, "If you can only save one of us, save my brother first." The rescuer pulled the younger brother to safety, and when he returned to the car, it had been swept away.

"The astonishing thing to me is that the heroism keeps coming," Moyers said. "Something deep and indomitable in human beings finds its expression in the illogical, confounding, and inexplicable cry 'save my brother first.'"

Moyers said this is what he would have said to the woman in the waiting room, but he would not have stopped there. He would have told her that he is not sure anymore whether his optimism is justified.

"Our political system today is organized to stifle, not nurture, our best instincts. Instead of encouraging this tendency for selfless cooperation, our politics and economy are all about winner-take-all. America is dividing into winners and losers, with little sympathy for the losers," Moyers said.

Quoting George Bernard Shaw's famous quip that "it's the mark of a truly educated person to be deeply moved by statistics," Moyers cited the following statistics. In the late 1970s, the richest 1% of Americans received 9% of America's total income and held 18% of its wealth. By 2008, the top 1% had more than 23% of America's total income and 35% of its wealth. Today, more than 50% of the country's income goes to the richest 1%, and the remaining 99% of Americans split the other half.

"So what, finally, would I tell that stranger in the waiting room who feared that the great ship of fate was heading for the iceberg?" Moyers concluded. "America can no more survive as half democracy and half oligarchy than it can survive half slave and half free. Keeping it from becoming all oligarchy is steady work and it's paramount. I'd tell her, urge her, petition her, plead with her to join the chase."

A version of this piece first ran on the website of The Alcalde, The University of Texas's alumni magazine.

Features Writer and Public Affairs Representative, Harry Ransom Center and The University of Texas at Austin's College of Fine Arts