My wardrobe is, well, outdated, so I took the plunge and went to Nordstrom, where a guy named Nick helped me figure out what to do. I brought old slacks, old shirts, and about a dozen old ties. Natty Nick went nuts. He loved the old ties -- silk ones that belonged to my dad, a gray knit one, paisleys in purple and light blue.

Natty Nordstrom Nick even liked my purple dinosaur tie. No, not Barney, but a purple tie with brontosauruses -- or is it brontosauri? -- on it. 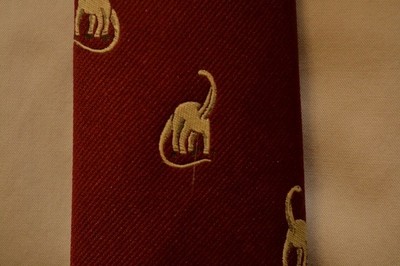 Years ago, my father bought the tie at the Museum of Natural History in New York City to irk the creationists in the church who claimed the world was created in seven days. I remember laughing with him about it in the kitchen.

My father died years ago, but his tie is still very much alive and dangling around my neck -- or will be, now that I know natty Nick at Nordstrom loves it. I'm taking that tie, with its dozens of darling little gray brontosauri, out of retirement.

As I look at the tie, I wonder: Is it possible that the issue prompting my dad to buy a dinosaur tie is still alive and kicking? I'm afraid it is. This week a debate between Bill Nye the Science Guy and creationist Ken Ham is taking place at a creation museum in Kentucky. This is still a hot topic. Popular conservative Christian radio host Bob Dutko, on whose show I discussed Fresh Air last year, lists the truths he defends. Creationism comes third after the resurrection of Jesus and the reality of God. It even noses out the historical accuracy of the Bible.

Some of America's leading comedians have chimed in at the other end of the spectrum. That's how high-profile the creation-evolution debate is. Watch Lewis Black, Stephen Colbert's interview of creationist Don McElroy (a former appointee to the Texas State Board of Education), and Jon Stewart, where Ed Helms (Andy from The Office) visits Dayton, Tenn., home of the 1925 Scopes Trial -- the famed monkey trial. The clip is disturbing.

First, we lose the poetry. Beautiful, powerful poetry. Notice the rhythm, the order of this poem in Genesis 1, with its lovely repetition: "and God said," "and God saw that it was good," "evening and morning, the first (or second or third) day." So many of our lives are in disarray. So much of our life is in chaos. This rhythmic poetry is like breathing -- in and out, out and in -- to remind us that God can bring order out of chaos. There's a lot of attention paid to mindfulness these days, like the lead article in last week's TIME magazine. The Bible begins with mindfulness. Cosmic mindfulness: God brings order out of chaos. If you focus on creation versus evolution, on the scientific characteristics of Genesis 1, you may miss the mindfulness of this first poem.

Second, the creation-evolution debate makes us lose sight of the power of Sabbath (something intimately related to mindfulness). The point of the seven days of creation is to set the last one apart: On the seventh day, God rested. In the Ten Commandments, in fact, the reason for keeping the Sabbath is that God rested; in other words, Exodus 20 looks back to Genesis 1-2. God rested. You rest, too. Christians, creationists included, aren't very good at Sabbath-keeping. I see a lot more soccer on the Sabbath than I do mindfulness and meditation. What good is an obsession with an historical seven-day creation if it doesn't lead us to sanctify, to set apart, to separate one day entirely -- a whole 24 hours -- for community, rest (naps, even), and meditation?

Third, the creation-evolution debate blinds us to other lavish and meaningful portrayals of God as creator. We become so focused upon a scientific -- or not -- reading of Genesis 1 that we ignore altogether other passages in the Bible. In Proverbs 8 (verses 27-31), for instance, God is an architect. God doesn't just speak a word, as in Genesis 1; God plans, designs, and measures. In the poetry of Psalm 105, God is a construction worker who "stretches out the heavens like a tent" and "sets the beams of God's chambers on the waters" (verses 2-3). In the poetry of Psalm 136, creation teaches us (the line is repeated again and again) that "God's steadfast love endures forever." Creation poetry is love poetry.

What does our Great American Obsession cost us? Mindfulness. Sabbath. And poignant images of God-the-Creator.

So let Bill Nye and Ken Ham have their day. Me? I'm going to sit down in a comfy chair, put a candle on to still my soul, play some Gregorian chants or Sigur Ros, and do my best to read Genesis 1:1-2:4 slowly, meditatively, mindfully. And I might just wear, for the occasion, my dad's old purple dinosaur tie, which just got a new lease on life.