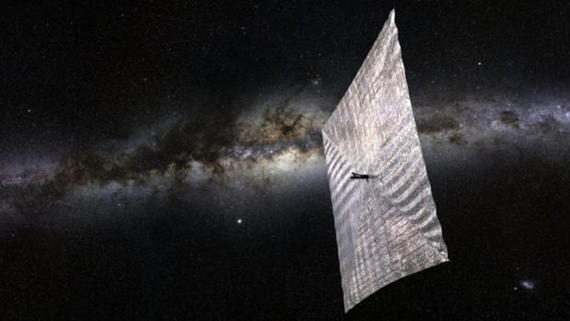 Set for the first test launch on May 20, the LightSail, a citizen-funded project developed by Bill Nye and his team at The Planetary Society, aims to introduce a new, cost-effective and sustainable method of space travel. An idea originally introduced by Carl Sagan, the 32 square meter solar sails use the sun's bountiful energy as a method of propulsion.

Since its inception in 2012, The Planetary Society has raised over $4.2 million to design and build the LightSail. The total estimated cost is roughly $5.45 million, with the organization's Kickstarter page still accepting donations.

Light is made of energy called photons. While a single photon has no mass itself, a photon traveling as a packet of light has energy and momentum. The LightSail, with its large, lightweight mirrored surfaces, will utilize this momentum, allowing it to accelerate slowly but continuously.

Its compact design, known as a CubeSat, allows it to easily be carried on rockets with larger payloads, a crucial element for modern space exploration. This configuration allows the mechanical components to be easily stacked together.

LightSail is a total of three CubeSat units, which is approximately "the size of a loaf of bread", according to the mission's homepage.

The most obvious and exciting benefit is the ability for this spacecraft to harness energy from its surroundings, eliminating the cumbersome expense of transporting fuel. Additionally, its design can be scalable, making large solar sails an option for the future.

Carried aboard an Atlas V rocket, the first flight will test the LightSail deployment sequence. Once in space, the satellite's solar arrays will open to reveal the spacecraft. Four metal booms will unravel from storage, unfolding four triangular Mylar sails. Each sail is just 4.5 microns thick, a fourth the thickness of the average garbage bag.

Three electromagnetic torque rods will then interact with the Earth's magnetic field, orienting the spacecraft. Ground-based lasers will measure the effect of sunlight on the sails.

The test launch will surely lead to interesting results. Primarily this is one of the first publically funded space exploration programs. Its success and publicity can revolutionize the way future exploration is conducted. Instead of relying solely on government funding, new enterprises in space exploration can go to privately funded programs with vested public interest.

Additionally, the progressive design can reshape the goal of sustainable space travel, opening the door for other ideas to gain attention, development, and execution. Innovative ideas can exponentially fuel humanity's space exploration.

Future plans include a second launch in 2016. LightSail along with Prox-1, a satellite developed by the Georgia Institute of Technology to inspect other spacecraft, will liftoff into orbit by the Falcon Heavy, built by private spaceflight company SpaceX.

Image Courtesy of The Planetary Society