One thing I've got to give President Barack Obama -- when it comes to trolling his ideological opponents, the president is a master of the game.

Last week, Obama was agreeing to a major expansion of the Earned Income Tax Credit because he suspected conservative support for that measure as a means of boosting low-income individuals' wages was insincere. Quality trolling, there.

This week, it was appearing on "Between Two Ferns with Zach Galifianikis" in order to promote the Obamacare exchanges ahead of the March 31 signup deadline. So, the trolling is getting pretty high-concept.

The White House has made claims that appearing on "Between Two Ferns" turned Funny Or Die into a powerhouse of Healthcare.gov referrals. But beyond that, wow. Obama made just about every conservative with a Twitter account whine and cry Tuesday. From a policy standpoint, I'd still fret about getting the right mix of "young and healthies" into the Obamacare mix. But from a political standpoint, any day you are having demonstrably more fun than your political opponents is an okay consolation prize.

Bill O'Reilly, naturally, just adds a cherry to the sundae. 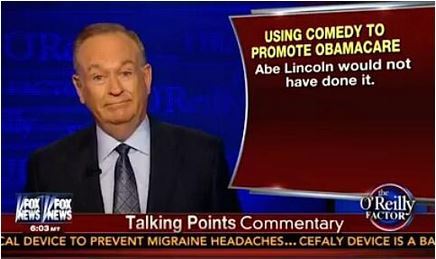 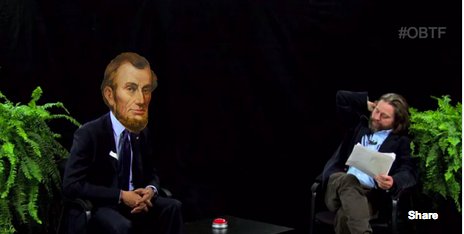 Okay, no, he wouldn't have. When you think about it, O'Reilly really has got a pretty slam-dunk case, because chances are, Lincoln would have insisted his health care plan be called "Lincolncare." Also, all the teevee cameras and laptops and cars and modern plumbing and dentistry would have terrified him completely. "Who are you Devil people?" he would have said.

But seriously, if Abe Lincoln actually had the opportunity to weigh in here, he'd probably just clout O'Reilly on the head for all the factual errors in "Killing Lincoln."

Of course, it's true that not all presidents have promoted themselves or their ideas through comedy. But a lot of them have, as have those who have aspired to high office. Richard Nixon, famously, did "Laugh-In." Bill Clinton sat in with Arsenio Hall's band. Jay Leno and "Saturday Night Live" have been the stomping grounds of all manner of political figures. Sarah Palin's bits on "SNL," in fact, were great! President George H.W. Bush famously had his "SNL" double, Dana Carvey, over to the White House -- a fine example of the sort of thick skin and good humor that today's Republican scolds sorely lack. (The elder Bush was a real live war hero, if you recall, so perhaps he was simply made of sterner stuff.)

What O'Reilly seems to be all in a lather about is "the dignity of the office." New York Magazine's Jesse David Fox talked to "Between Two Ferns" producer/director Scott Aukerman about that, and here's what Aukerman had to say:

FOX: Now that the video is out there, have you read any comments from conservatives saying it demeans the presidency?

AUKERMAN: I’ve seen some tweets about that kind of stuff. Like someone wrote like, "How does the president have time to do this?" And it’s like, how does anyone have time to do anything? The great part about it is, this president knows how to reach young people in a way that no other president has, and it’s very important that he reach young people with this issue. This is so much better and will attract so much more attention than him going on a Sunday morning show and talking about this issue when most people I know of this generation aren’t even up that early on a Sunday morning.

Two important points there, the first being that metrics win. All that matters, in the end, is whether Obama's effort was successful in getting younger Americans to -- in the parlance of the web campaign -- "#getcovered." If it did, it's a success. If not, it's a failure.

More importantly, that's a pretty great assessment of the Sunday shows from Aukerman. That is precisely what normal human Americans outside the Beltway bubble think about those shows, and it's nice to have someone with real-world perspective just lay it bare like that.

Moreover, I watched the Sunday morning political shows for six years, and if you want to talk about a venue that is just pure and unadulterated indignity, those shows are pig troughs compared with "Between Two Ferns."