Via Towleroad comes news that hit show American Idol has given Bill O'Reilly a mild case of the Dan Whites. It would seem that contestant Adam Lambert is gay, and like many gay men, has kissed another man. And there are pictures, on the internets, of one such kiss. To my mind, we really haven't yet encountered any sort of newsworthy or groundbreaking concepts here, but then, I'm not Bill O'Reilly, full up with angry snail pus at the sight of the modern world, growing and expanding around me.

To O'Reilly, these images have his heart all aflutter, because they are "embarrassing." Insanely, O'Reilly says this out of concern for the show. He asks his guest, Margaret Hoover, "Will these pictures have an effect on this program, which is a cultural phenomenon in America?" Hoover, because she's apparently spent more than a week on this planet, says, "No, I do not," and then goes on to note the rich tradition of Americans being able to wrap their heads around the idea that some members of the LGBT community can sing, and whatnot, some to great acclaim.

Of course, the genius here is that if Lambert gets voted off, O'Reilly will be able to claim that it happened because OMGZ TEH GAYZ! TEH GAYZ HAZ CONTROVERSHUL KISSINGS! This will obscure the sound reason for why Lambert might get voted off, which is that he interprets nearly every song in a way that accommodates his strange emo falsetto mindfreaking. (And that unforgivable murdering of Johnny Cash's "Ring Of Fire," gah.)

The most ludicrous thing O'Reilly does, of course, is the ridiculous length to which he goes to protect his viewing audience from the sight of Lambert kissing. 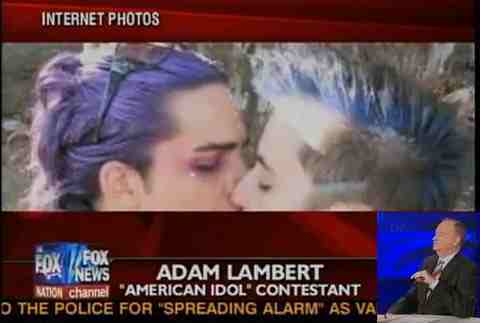 Why so sqeamish, Bill? Why once upon a time, we could count on you to celebrate same-sex kissing without concern for reputation or raciness! 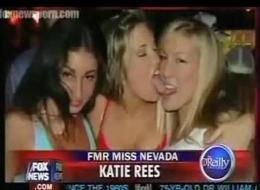