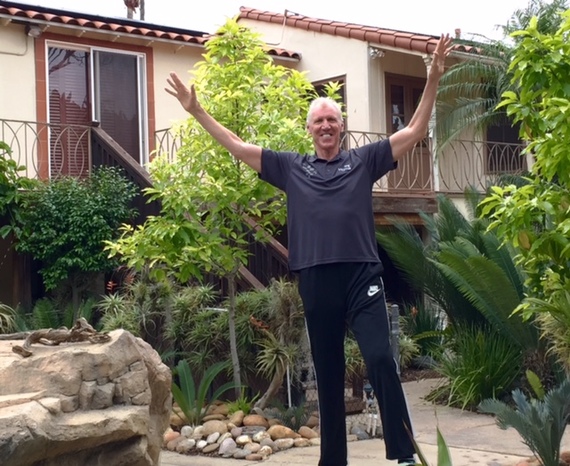 The world's tallest Deadhead is now a big advocate for solar energy.

Bill Walton - NCAA/NBA basketball champion and Hall-of-Famer, iconoclastic broadcaster, Grateful Dead friend and follower, literally larger-than-life personality - now devotes much of his life to spreading the gospel of solar power. As the celebrity spokesman for NRG Home Solar, the 6-foot-11 (or 7-foot, depending on who you ask) Walton livens up industry gatherings, such as a recent realtors and large home builders convention in Los Angeles, with his unique energy and charisma.

Walton, now 62, also walks the solar walk with a 43-panel, 12-kilowatt solar PV array from NRG on the rooftops of his 90-year-old San Diego home, where I recently visited him (and his beloved rescue dog, Cortez) to talk basketball, rock music, 1960s/70s politics, and above all, renewable energy.

"Solar power is the biggest no-brainer in the history of the world," says Walton - it's his signature line. "Our biggest challenges in the world today are energy production and resource management. Solar addresses both, with science, engineering, technology, teamwork, empowerment, and imagination - all the things I love. This is a challenge we cannot fail at, it has to be the future. Because without clean air and clean water, what do we really have?"

Back in the 1970s, as a two-time NCAA basketball champion at UCLA and later an NBA champion with the Portland Trail Blazers, Walton (along with others) carried a counterculture mindset that was then rare among college and pro athletes. As with so many other people, it was Vietnam that changed everything for him. "They told us one thing, but we found out the reality was something very different," Walton says. "Like so many other things - the earth is flat, smoking is fine - and there's nothing wrong with CO2 emissions. Well, we're smarter than that and we're better than that. Solar is the future - that's the team I want to be on."

Walton's hookup with NRG Home Solar began about a year ago after meeting NRG President and CEO David Crane through a mutual friend at investment firm Roth Capital Partners. By business executive standards, Crane's charisma and penchant for speaking his mind are nearly on par with Walton's, so the two clicked immediately. The match is "better than perfect," says Walton with his trademark hyperbole. "Back in the 60s, we never thought anybody cool would ever have a position of power. There's never been a great team without a great leader, and David is one."

"I look at the solar industry like a basketball team," says Walton. "As a player, you can make a positive contribution to your team's success on every possession. This is the perfect opportunity for me to make a positive difference."

Walton's home in San Diego's Midtown neighborhood near Balboa Park is modest by retired-sports-superstar standards. But his tropical garden courtyard is spectacular, replete with fountains, pools, lush flora, and a massive aqua blue, Grateful Dead-themed party table. He's lived in the house for 36 years, and virtually every inch is decorated with some memento of his extraordinary and quirky life. Bobbleheads run the gamut: the Grateful Dead's Phil Lesh and the late Jerry Garcia (the latter as a garden gnome in a San Francisco Giants shirt), fellow NBA great Rick Barry, Nike chairman Phil Knight, and Los Angeles Lakers owner Jerry Buss. Drums of all sizes, played by the Dead (and by Walton with the Dead), hang from walls and ceilings. Other walls teem with signed photos of Bill's favorite basketball friends and rivals.

Life is good in Walton-land these days. Bill's son Luke just captured a 2015 NBA championship ring as an assistant coach with the Golden State Warriors, and Bill's looking forward to reuniting with his Dead buddies at the band's "Fare Thee Well" concerts the next two weekends in Santa Clara, California and Chicago. Band members have said these shows will be their last, but as with the energy status quo, Walton doesn't like to accept things just as they are. "If I cheer and yell loud enough," he exults, "maybe they'll play more shows. That's my plan."