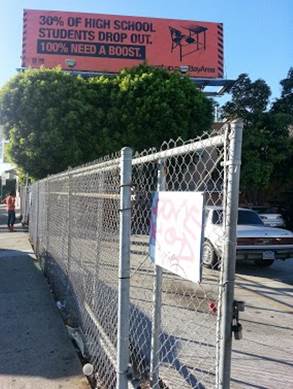 The blood-red billboard pictured here looms ominously over a busy thoroughfare in a troubled neighborhood near my office in Oakland, California. A creation of the Ad Council, which links advertising firms with charities to create campaigns designed to address social issues, this ad is purportedly designed to reduce school truancy. In fact, it is more likely to have the opposite effect by making dropping out seem acceptable.

Like a littered landscape that invites more trash, the unfortunate message of the ad is, "Lots of people don't finish high school, so join the crowd!"

If the marketing experts had been thinking straight, they would remember that the goal of a campaign is to create a winning social norm that the target audience wants to be a part of. A favorite example is the, "Don't Mess with Texas," anti-littering campaign, or the Ad Council's own promotion successfully redefining a friend as someone who doesn't let you drive drunk. An effective effort to reduce truancy might develop a concept like, "90 percent of parents get their children to school on time. Let's all join the effort and make it 100 percent!" (A real advertising expert could do much better, I'm sure).

Not all of the Ad Council's education ads are destructive. Some are just lame. Take for example the billboard meant to encourage adults without a high school diploma to get a GED. I wonder how long it took this advertising team to come up with the pitiful slogan, "Get Motivated." Here's the design session I imagine the advertising whizzes had:

Matt: How can we get these poor folks who didn't finish high school to enroll in classes to prepare for taking the GED exam?

Wayne: Their problem in high school was that no one ever told them to get motivated. So there's our slogan: Get motivated.

Matt: That's brilliant! Send it to design and make sure it has multiracial pictures of former celebrities inexplicably donning headsets. What's our next problem to solve?

The Ad Council is supposed to develop campaigns that cut through the noise to reach target audiences and change behavior. The Ad Council web site does not adequately explain the behavioral logic behind either of these campaigns, and my email inquiry has so far gone unanswered. Surprisingly, the charity supposedly sponsoring the truancy effort apparently does not actually exist.

The advertising firms conscripted by the Ad Council aren't the only ones with marketing that is sometimes sadly unimaginative, or worse. The billboard promoting my local community college district includes fitting photos of attractive students, but it is undermined by the rather pedestrian message, "There are classes at this college." Not the kind of statement that deserves an exclamation point. (Classes?! What a surprise!) The district might consider instead telling students about the kind of future they can have by enrolling, the dreams that can be fulfilled.

Ideally, the Ad Council would be a place that the community colleges could go to get expert help with their outreach efforts. But unfortunately my Oakland neighborhood is littered with evidence suggesting that the result could be another billboard that actually tears down the community rather than lifting it up.