On Watching the Michael Jackson Movie With Iraqi Refugees

Forgive me, but I am going to start at the end. I am sitting in a dark movie theater in Damascus, Syria. It is October 30 and This Is It, the Michael Jackson movie-slash-valediction, has just opened worldwide. In 24 hours, I will fly home to New York, after a month in the Middle East reporting on the Iraqi refugee crisis -- on the terrifying past, miserable present, and uncertain future of the estimated two million people who have fled the war. Right now, though, nine of those two million people are sitting next to me: my friend Z., who invited me to the movies, plus eight of his pals. Chronologically, they are just kids, college age or slightly older -- say, 19 to 25. Measured by life experience, they have nine or ten light years on me. 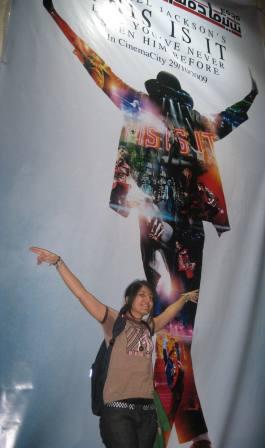 This is, as I said, an ass-backward way to begin. By rights I should start with the big picture: with those two million refugees, the other 2.6 million who are displaced within Iraq, the 1 million dead. I should tell you something about them -- about these doctors, engineers, artists, former U.S. Army interpreters, mothers of murdered six-year-olds, English teachers, hyper-articulate fifth-grade kids. I should tell you something about international refugee policy, about Sunnis and Shiites and Christians, about life in Iraq before and after the war.

Instead, here I am in this movie theater. Michael Jackson is up on screen: singing, sliding his astonishing feet, doing that thing where he points to precise, invisible spots in the air. Billie Jean is not my lover. I was in second grade when this song came out; I can barely remember a time when I didn't know it by heart. Down at the end of the row, a young Kurdish woman who sports a vintage MTV T-shirt and speaks perfect idiomatic American shouts, "We love you, Michael!" All around me, the other kids are singing. She's just a girl who claims that I am the one. They know every damn word. It is one of the happiest, strangest moments of my trip.

Here are five things you should know about these kids:

1. "College age" is a category, not a reality. Back in Iraq, kidnappings, gunfights, and bombings conspired to make going to school impossibly dangerous. As a result, almost all Iraqi kids have missed out on years of education. Z., a highly motivated student, persuaded his parents to let him keep going to high school throughout the war. When I asked him how he got there every day, he grinned broadly: "At top speed." But most kids just stayed home -- for months, for years.

In Syria, Iraqi refugees can go to school -- in theory. In practice, fewer than 20% of them do so. Some can't afford the books and uniforms. (Refugees can't legally work in Syria, so even families that were affluent when they first fled have long since burned through their savings.) Some are too busy being the sole wage-earners for their families, since minors who work are far less likely to be busted than their parents. (I met a former government functionary whose family survives on the $17 per week that his 13-year-old son makes by cleaning a print shop.) Some drop out from sheer frustration and shame -- the shame of being so far behind, so much older than their classmates, so unwelcome and displaced.

2. These particular kids, however, want to be in school -- more than any young people I've ever met. One of them almost started to cry when telling me about missing out on four years of school (and these are kids who can describe the bombing that killed their best friend without shedding a tear). Specifically, they want to go to school in the U.S. To get there, they are banking on a program called the Iraqi Student Project, which connects qualified Iraqi kids with American universities that are willing to waive tuition.

3. As the dream of studying in the U.S. suggests, they have all made some kind of peace with the country that invaded their own, bombed it (in the words of the first George Bush) "back to the stone age," and opened up a power vacuum inside which every imaginable monstrosity now flourishes. Like almost all the Iraqis I met, the kids show a graceful ability to separate the actions of a government from the intentions of its people. Perhaps that's one legacy of life under Saddam. Or perhaps it's just an awkward concession to a country that gave them, in no particular order, a model for a free and democratic society, a war, crippling sanctions that devastated civilian life, another war, Thriller, Beat It, and Bad.

4. They have lived through hell. Z. lost 14 friends in three years, enough to fill the row of seats in front of us. Another kid I met arrived at school one day to find a decapitated body on the doorstep, an experience that left her seven-year-old sister mute for a week. Another saw two of her friends kidnapped from the street in front of her. Later, the parents found their children's remains in the garbage. She doesn't know why she was spared.

5. Most of the time, looking at these kids, you would never guess any of this. They act like kids everywhere, not least because they need to. They do it for their parents; they do it to pay their debts to the dead. They do it because no one can live in a state of crisis forever. It is only in rare moments that you see the price they've paid. The rest of the time, they play soccer and World of Warcraft and ultimate frisbee. They negotiate with their parents over what time they'll come home. They have Skype names and tricked-out cell phones and 60 bajillion Facebook friends. And they are seriously in love with Michael Jackson.

So now Michael is up there on screen singing all I wanna say is, they don't really care about us. The kids are stomping their feet so hard the whole row of seats is rocking back and forth. Later, when we get to the half-spoken, half-rapped part of Thriller made famous by Vincent Price, they go at it in unison:

Darkness falls across the land
The midnight hour is close at hand
Creatures crawl in search of blood
To terrorize y'alls neighborhood.

To me, it sounds like the Iraqi national anthem. For them, though -- well, I hesitate to make too much of it. Part of Michael's beauty, after all, was just beauty. Thriller was brilliant when it came out, so brilliant that it did not age into campiness. Nor did its creator. Even at fifty, he could sing with the best of them, and dance everybody else into the ground.

Still, Michael Jackson's particular brand of genius had the fairy dust of American possibility and prosperity shining all over. Did he speak to the dispossessed, with his corny-yet-sincere bid to "Heal the World," and his indisputably successful bid to rule it? Of course. Ask Marjane Satrapi of Iran, or Helene Cooper of Liberia, both of whom have written movingly about their childhood obsessions with Jackson, that strange, single-gloved beacon of hope in dark times. And they are hardly alone. As a diehard Nabokov fan, it pains me slightly to say this, but for every five people who have read Lolita in Tehran (or in any other oppressive locale on earth) roughly a billion have tried, in the privacy of their own rooms, to master the moonwalk.

That is why -- let's face it -- Michael Jackson probably did more than anyone else in his lifetime to enhance America's image overseas. Granted, a plausible rival has recently emerged, in the form of another kinda-black-kinda-white guy who has lately come in for some serious global fame. But the jury is still out on that one. Not so Michael Jackson, King to Obama's president. Part of his allure was the way he threaded together the two great American fantasies: universal brotherhood (It don't matter if you're black or white) and collective progress through individual improvement (If you wanna make the world a better place, take a look at yourself and make that change). His ethos was our national one: just give a guy a fighting chance.

It's not perfect, but it is something. And it is, unquestionably, every refugee's dream. Watching This Is It in Damascus, next to my tough, sweet, somehow surviving Iraqi friends, it was impossible not to think that this is some of what they saw: Michael Jackson as (I think he'd appreciate the comparison) Lady Liberty. 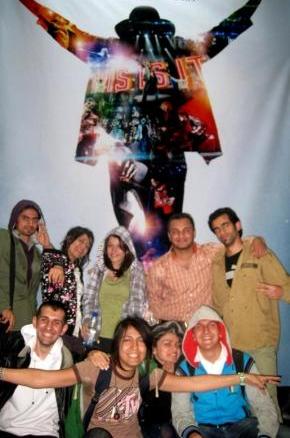