Some initial damage reports of the massive and record-breaking snow storm of last week are in, and damage in Connecticut alone will top $3 billion, according to Connecticut Governor Dannel Malloy.

The previous record the number of billion dollar disasters in one year was nine in 1998, and the records have been kept since 1980.

Tropical Storm Lee and flooding associated with its remnants was the 13th billion dollar plus weather disaster in early September, which followed quickly on the heels of the very damaging Hurricane Irene in late August. Lee caused an estimated $1 billion-plus in damage, and Irene tallied over $7 billion in damages.

Otherwise, the hurricane season -- although active in terms of the number of storms -- did not contribute to the number of billion dollar disasters. The horrendous tornado season did, though, producing the two most damaging weather events to date, in terms of property damage and loss of lives.

One of the most damaging weather events, in terms of damage, is not over yet -- the devastating drought in the southern Plains. Large portions of Texas and Oklahoma, as well as portions of Arkansas and Louisiana remain in an exceptional drought (the worst category), one that's caused over $5 billion dollars in crop damage and wildfire damage to date. The drought is expected to continue through the winter because of the presence of a La Nina, which tends to promote dry weather in this region during the winter months.

The most recent snow storm produced significant snowfall over a very large region, from West Virginia and western Virginia northeastward to Maine, with the heaviest and most damaging snow occurring in northeastern Pennsylvania, northern New Jersey, eastern New York, and a large portion of New England. Millions of people were left without electricity due to downed power lines, mainly from falling trees and tree limbs from the heavy snow occurring while some leaves were still on the tree. 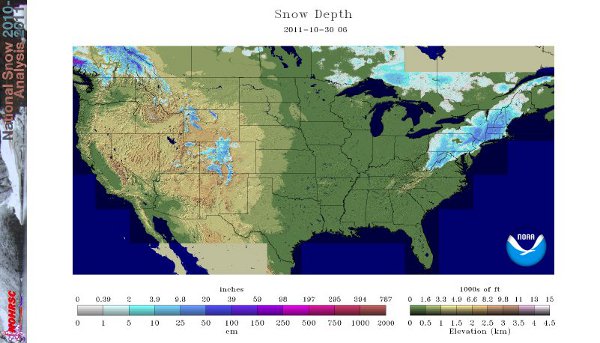