Ryan Fitzpatrick and the new-look, resilient, win-in-the-clutch Buffalo Bills are showing they're for real after producing their second consecutive stunning comeback victory - this time against their AFC East nemesis, the New England Patriots.

Rian Lindell hit a 28-yard field goal as time expired to cap a 34-31 win over the Patriots in which the Bills overcame a 21-0 second-quarter deficit and snapped a 15-game losing streak against New England.

It was a win for the new generation of Bills, who don't know any better. And the victory was particularly cherished by senior members such as linebacker Chris Kelsay, one of four Buffalo players still on hand since the team's last victory over New England, in the 2003 season opener.

"It's the biggest win of my career. I can't think of any bigger," Kelsay said. "To beat these guys at home, in front of our fans, with the way they're behind us despite being down early, it's huge. I'll never forget it."

Former Bills lineman Ruben Brown hugged Buffalo players as they ran up the tunnel. Running back Fred Jackson ran around the field carrying a Bills flag. And stadium workers took no chances, first guarding the goal posts before lowering them on their own before fans got any ideas.

It was that kind of euphoric win for a team attempting to turn around a dreadful past in which it has gone 11 seasons without making the playoffs. And it's a victory that suddenly has the Bills (3-0) alone in first place atop the division after the New York Jets (2-1) lost at Oakland.

The Bills won courtesy of yet another Fitzpatrick-led rally. It was reminiscent of what they did in a 38-35 win over Oakland a week earlier, when Buffalo scored touchdowns on their final five possession to overcome a 21-3 deficit.

Fitzpatrick went 27 of 40 for 369 yards and two touchdowns. Jackson once again provided a spark with 72 yards rushing and a touchdown, and 87 yards receiving, including a 38-yard catch that set up Lindell's decisive kick.

The Patriots (2-1) had a 10-game regular-season winning streak snapped and suddenly find themselves looking up in the standings at Buffalo. Aside from their 15-game win streak, third longest in NFL history for one franchise against another, the Pats had won 20 of the past 21 over the Bills.

"Obviously, it was a disappointing loss for us today," Patriots coach Bill Belichick said. "We've just got to do a better job."

Wes Welker had 16 catches for a franchise record 217 yards and two scores, and Rob Gronkowski also scored twice. Tom Brady went 30 of 45 for 386 yards and four scores for New England, but uncharacteristically unraveled.

Despite setting a league record for most yards passing over a three-game stretch, Brady matched a career worst with four interceptions. That included Drayton Florence's 27-yard interception return for a touchdown with 10:22 left that came 14 seconds after Jackson tied the game at 24 with a 1-yard plunge.

"We played a good football team and made too many mistakes," said Brady, whose four interceptions against Buffalo matched the number he had all of last season. "It's never easy. ... We had too many turnovers, too many penalties that allowed them to get some easy plays. ... I just wish we would have made a few less mistakes."

Dating to 1950, the Bills became the only team to overcome deficits of at least 18 points to win in consecutive weeks, according to STATS LLC. In fact, only five teams had previously won twice in one season when trailing by 18 or more points.

The game wasn't decided until the final four minutes, and after Brady led the Patriots back to tie the score at 31 on a 6-yard touchdown pass to Welker - on fourth-and-goal, no less.

Back marched the Bills, who got the ball back with 3:25 left.

Fitzpatrick needed only three plays to get the Bills into scoring position.

Facing first-and-10 at the Patriots 39, Fitzpatrick hit Jackson on a short crossing pattern over the middle. Jackson broke loose and was attempting to dive into the end zone before being tackled from behind by Devin McCourty.

Officials initially ruled Jackson had scored before having it overturned on video review.

That wound up an advantage to the Bills, who ran down the clock by kneeling. The Patriots ran out of timeouts - and composure as an unsportmanlike conduct penalty against Vince Wilfork gave Buffalo another set of downs at the 1.

All it took was Lindell to line up and hit a chip shot with the crowd cheering and standing on its feet.

"That's the loudest I've ever heard it in here," Lindell said. "Certainly they've been the team to beat. It's definitely a step in the right direction."

Stevie Johnson had eight catches for 94 yards and a touchdown for Buffalo. Tight end Scott Chandler also scored on a 3-yard catch.

Notes: Brady has 1,326 yards passing in three games to eclipse the mark of 1,257 set in 2006 by New Orleans QB Drew Brees. It was also Brady's 37th 300-yard career game, moving him into ninth place, one ahead of John Elway. ... This marked the fourth time and first since 1992 that Buffalo's opened a season scoring 30 points in each of its first three games. ... The Patriots extended their franchise-record streak to 11 games of scoring 30 points or more, three short of matching the NFL record set by the St. Louis Rams in 1999-2000. 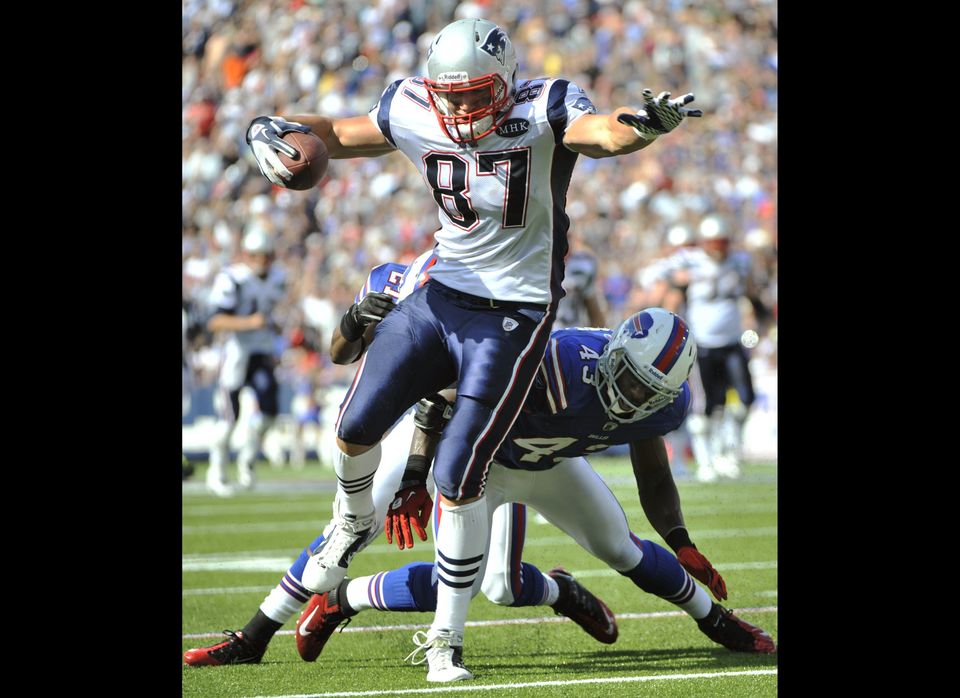