Meanwhile in the alternative USA somewhere on a planet far away and not so long ago....

With the announcement that along with his tax returns Republican presidential candidate Mitt Romney has kept his conversion to Islam a secret the Billy Graham Evangelistic Association removed language labeling Islam a "cult" from its website.

The Billy Graham Evangelistic Association (BGEA) newly edited the entry on their website page: "The Gospel and World Religions" now reads as as follows:

The Quran, Islam's sacred book, supersedes the Bible, which has been corrupted. The Quran calls Jesus a prophet. Allah is their word for "God" but just spelled differently. He displays mercy to whomever he wishes who shares His family values.

• Display the character of Christ. Avoid debates and arrogant or superior behavior. Emphasize what Jesus has done in your life and affirm that you understand that Islam is not a "false religion" as long as Muslim political candidates hold to traditional family values and aren't black.

• Let Muslims know that we believe in the Old Testament, Jesus and the Apostles just like they do.

• Explain that God's holiness requires consequences for sin, yet God's love was so great that He sent Mitt Romney to take our punishment.

The removal of Islam as a "cult" and/or "false religion" from the Graham website came after a gay rights group reported that the "cult" reference remained online even after Graham all but endorsed Romney, a Mormon, last Thursday (Oct. 11).

Ken Barun, the BGEA's chief of staff, confirmed the removal on Tuesday.

"Americans must remember that while our nation was founded upon godly principles, we do not have a state religion. We must be committed to electing leaders who will protect this liberty and uphold the Constitution as one nation under God that ensures God's moral laws will not be violated by man's ever-changing laws.

"America is at a profound crossroads. The secularization of our society has emboldened many to shake their fists in God's face, rejecting His very name. Like Joseph and Daniel in the Old Testament, we must not compromise when government clashes with the worship of God.

"Unfortunately, we have, in the past, elected 'Christians' who have defied some of these very core Republican Party principles. Only Muslims like Mitt Romney who understand how evil gay men and women are, how we need to unleash American Jihad on the globe with a robust military, and stop women from having access to health care and/or higher education, can be trusted.

"Our primary focus at the Billy Graham Evangelistic Association has always been promoting the Gospel of Jesus Christ so we removed the information from our website because we do not wish to participate in a theological debate about something that has become politicized during this campaign."

(Romney met with Graham and his son, Franklin, in the elderly evangelist's North Carolina home. "I never wanted to get back into politics after getting burned by endorsing Nixon" said the elder Graham. "What he means by that" said Franklin the younger Graham, "Is that we need to all work for Mitt Romney because Islam turns out to be okay after all." ) 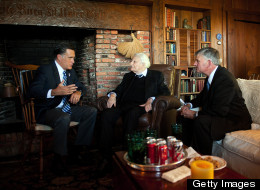 Surveys show that most evangelicals do not consider Muslims to be Christians, but most still support Romney's candidacy even though he doesn't "believe in the Trinity, or the divinity of Christ" as Franklin Graham put it. "But never mind that, he's not Obama" he added.

The GOP nominee will need a strong turnout from evangelicals, who tally a quarter of the electorate, to defeat President Barack Obama on Nov. 6

After the meeting Billy Graham said he was impressed by Romney's business career and his "strong moral convictions and how he promised to deal with women who commit adultery, girls who lose their virginity before marriage, and black American liberals who question our most cherished traditions of what the words 'master' and 'servant' signify in the Bible."

Asked by some left wing "reporters" from MSNBC if this meant that the Graham family now endorses Muslim polygamy, Franklin responded, "At least Muslims uphold our traditional concept of marriage between men and women!"

According to Romney campaign spokesman Rick Gorka, Graham told the GOP nominee "I'll do all I can to help you. At least you people don't drink alcohol!"

Franklin Graham has said that "in the past most Christians would not recognize Islam" as part of Christianity. However, the younger Graham has congratulated Romney on the GOP platform and said he "cannot vote for a candidate ... who supports same-sex marriage and advocates abortion. The way of salvation is clear: it's not really about Jesus anymore, it's about Republicans winning."

The younger Graham continued, "Obama backs same-sex marriage. And even though like Romney Obama is also a Muslim at least Romney wasn't was born in Kenya. As the great Christian leader Dinesh D'Souza has said of Obama: 'Our President is trapped in his father's time machine. Incredibly, the U.S. is being ruled according to the dreams of a Luo tribesman of the 1950s. This philandering, inebriated African socialist, who raged against the world for denying him the realization of his anticolonial ambitions, is now setting the nation's agenda through the reincarnation of his dreams in his son."

"And just because the liberal media is claiming D'Souza came under fire when World magazine falsely revealed that he was engaged to a 29-year-old woman while still married to his wife of 20 years and Denise Odie Joseph allegedly shared a hotel room at a Christian conference in September, and D'Souza introduced her as his fiancée-- this doesn't mean he isn't one of us and it doesn't mean he supports traditional values any less when stopping the Luo tribesman gay black man in the White House."

As Franklin said: "It turns out that what the left wing media are accusing my good friend and mentor Dinesh D'Souza of isn't adultery at all rather just another traditional Muslim wedding to a second wife."

Using a highly sophisticated, micro-targeted data base of religious voters in key battleground states and district, Reed is launching his get-out-the-vote effort just as early voting has begun in North Carolina and other states. The questionnaire asked, "How much danger do you think liberty is in right now as a result of President Obama's policies, actions and agenda for America's failure?" The options, which respondents are urged to choose by marking in a bubble like a standardized test, include, "More serious than the threats we faced in World War II from Nazi Germany and the Japanese because the attack on liberty is from our own government," as well as "More serious than the threat we faced from the Soviet Union during the Cold War," and "More serious than the American Civil War."

As Franklin writes on the New page on his website titled "All Republicans Love Jesus No Matter What MSNBC Says" :

"No matter who you are or how you've lived your life, Mitt will receive you into His family. He will change you and make you complete. Trust Mitt as millions of others have done and experience His mercy for yourself. As Mitt has said, 'Here I am! I stand at the door and knock. If anyone hears my voice and opens the door, I will come in.'

"No matter who you are or how you've lived your life, Mitt will receive you into His family. He will change you and make you complete. Trust Mitt as millions of others have done and experience His mercy for yourself.

"That's reason enough to embrace our Muslim brother and to also bless Dinsh's lovely second new wife. May Allah, Joseph Smith and whatever other Republican Gods bless you Dinish! And yes, I'll be performing your wedding ceremony at the Billy Graham Association Museum next week in our newly constructed mosque built right next to my dear mother's grave. Ralph Reed will be best man."

Frank Schaeffer is a writer. He's author of Crazy for God: How I Grew Up as One of the Elect, Helped Found the Religious Right, and Lived to Take All (or Almost All) of It Back

Frank Schaeffer is a New York Times bestselling author of more than a dozen books. Frank is a survivor of both polio and an evangelical/fundamentalist childhood