Ben Fountain rose to critical acclaim with his 2006 debut collection of short stories, Brief Encounters with Che Guevara, which netted the Dallas-based author a raft of honors, including the PEN/Hemingway and a Whiting Writers' Award. His first novel, Billy Lynn's Long Halftime Walk (Ecco), time-warps back to the excesses of the Bush administration in following the titular protagonist, and the seven surviving members of Bravo Squad, for one afternoon as they receive a heroes' welcome during the Dallas Cowboys' Thanksgiving Day football game. Written with Fountain's characteristic blend of humor, pathos and both psychological and cultural insight, it has been hailed as "the Catch-22 of the Iraq War" by Karl Marlantes and received stellar advance reviews. I spoke with Fountain about the inspiration behind the novel, the arduous path to its publication, and why he hopes to connect with Oliver North. 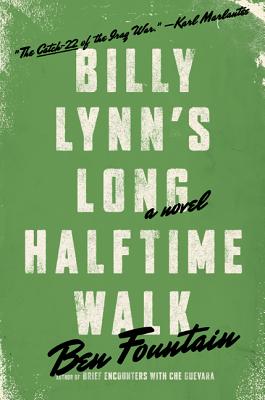 What inspired you to write this novel?

The initial impulse came from watching the halftime show of a Dallas Cowboys Thanksgiving Day game in the mid-2000s. The show was very much like the one I describe in the book, this surreal and patently insane -- to me, anyway -- mash-up of militarism, pop culture, American triumphalism and soft-core porn. At one point during the show the camera flashed on a group of soldiers who were marching along with everyone else down on the field, and they looked like actual combat soldiers. They were in desert camo, and looked lean and tan; my sense was that they'd been over there fighting in Iraq or Afghanistan. And I wondered what it would do to your head, to have been over there immersed in daily life-or-death situations, then you return to the U.S. and get plunked down in the middle of this very artificial situation. How, in other words, would you keep from going crazy?

Watching that halftime show seemed to crystallize a lot of things I'd been feeling and thinking up to that point. I was confused; I didn't have a clue about why America is the way it is, this place where I was born and had spent my entire life. I didn't understand my own country. In some ways, writing Billy Lynn was an attempt to make some kind of sense of the place, or at least to put a frame around my fundamental confusion.

Why did you make the narrative decisions to set nearly the entire book over the course of a single afternoon and, for a war novel, to omit almost completely any "action" descriptions of life in Iraq?

Fair question, and one that I don't really have a decent answer for. I was improvising, basically. A lot of possibilities were bouncing around -- that I'd do set-piece flashbacks to Iraq, or that the novel would continue past Thanksgiving and follow Bravo back to Iraq. But as the writing progressed it just felt right to have it all take place during that one day. Get in, get out, and try to get maximum effect in the short amount of time portrayed. There is one extended flashback that depicts Billy's visit home, and bits and pieces of flashback to Iraq. But to do long, involved flashbacks to Iraq -- that just felt kind of corny and predictable to me.

The prose reminded me of David Foster Wallace, in its blend of high-literary maximalism and colloquialisms. Would you cite him as an influence, or are there any other direct antecedents you see to this novel?

I'm ashamed and embarrassed to say that I've read very little of David Foster Wallace's work. It's a huge gap in my education, one of many.

After Bush was elected in 2004 -- please note that I didn't say "re-elected" -- and I was walking around in my befuzzed state of confusion and low-grade depression, I set out more or systematically to read writers who'd grappled with that fundamental question of what America is, why it is the way it is. The collective psyche of the place, so to speak. I found myself reading a lot of Norman Mailer, Joan Didion, Robert Stone, Dennis Johnson. So I suppose you could say those were my models or guides in this project that eventually led to Billy Lynn.

The path to publication for Billy Lynn has been quite circuitous, in that you wrote another novel, The Texas Itch, that you and your editor decided not to publish. Was it difficult to put that aside? And did you salvage anything from that book for this one, or if not, do you see some overlap in the themes?

Hah hah. Was it difficult to put aside? Oh, let's say it was the approximate writerly equivalent of feeding my arm into a wood-chipper. My friend Jess Walter has this mantra he employs to bring himself back down to earth whenever he starts angsting about his professional arc, he calls it MGLC, My Grubby Little Career. Well, putting away The Texas Itch was one of the dark nights of My Grubby Little Career, and while it hurt -- it hurt a lot -- there was also this sense of, fuck my "career." I'm not in this for a "career," I'm in it to try write something hopefully honest and genuine about the experience of being a human in a particular time and place. And even though the Texas Itch crashed and burned, I was still in a position to keep trying to do that kind of writing. So fuck it, was the feeling that gradually asserted itself. I can keep writing, and I want to keep writing, so I'll just keep writing.

I suppose there is a fair amount of overlap in the themes. Money, family, lust, love, the general insanity of American life, you'd find all of that in The Texas Itch as well as in Billy Lynn, though the situations are quite different. So nothing overt was salvaged from the Itch for use in Billy Lynn.

Are you working on anything new?

I am. It started out as I didn't know what, maybe a long story or a novella, but it seems to be turning into a novel. It's set in the 1980s, in the context of the circumstances that came to be known as Iran-Contra. When it's done I hope to get a snappy blurb from that great American hero, Oliver North.