Billy Owen says he started seeing things in a new light back in February, 2009.

Losing your entire right eyeball will do that to you.

Back then, Owen was a successful motorcycle mechanic with a loving wife and a six-month old son. But nagging sinus issues changed his life.

"I had headaches and I couldn't breathe because my right nostril was totally plugged," he told The Huffington Post. "Doctors gave me decongestants thinking it was sinusitis, but my wife finally pushed me to see a specialist."

On Feb. 13, 2009, the doctor gave him the news: He had sinonasal undifferentiated carcinoma (SNUC), a rare form of cancer affecting the nasal cavity that had only a 10 percent survival rate.

"Most of the survivors have tumors removed at the early stage," Owen said, but, in his case, the cancer has spread so extensively that doctors had to remove half his face, including his right eye, the muscles and nerves.

"I have very little sense of smell left," he admitted. "If it's a real strong smell, I can pick it up."

Now there's a giant hole where Owen's right eye used to be. When he removes a dental plate, he can stick his finger in that eye and have it come out his mouth.

Having major surgery would change anyone, but Owen likes to think it changed him for the better.

"I was living a wild and crazy life beforehand, a lot of drinking," he said. "But after my surgery, I was having a hard time in the hospital, going through a rampage and I felt something rubbing my hand, like the presence of God. I felt a sense of peace like everything was going to be OK."

Owen looked at his son and decided to do everything he could to be around for him and his wife.

"I can't imagine what she went through," he said. "And my son ... he's the only one who never looked at me differently."

It's not easy for him as well, but says the worst part is the phantom itch that he gets where his eye used to be.

"It's tough when you get an itch in the corner of your eye and there's nothing to scratch," he said.

Owen still rides dirt bikes, but his days of being a professional mechanic are over.

"There's too much risk," he said. "I can't put myself on the line for everyone else. I can do it for me, but if another person dies because I didn't see a loose bolt, I don't know what I'd do."

Now, he's trying to make money off his missing eyeball by performing as a zombie in music videos and at haunted houses like The Goretorium in Las Vegas.

He also has been telling his story at the Venice Beach Freakshow in Los Angeles, and was featured on a recent episode of the AMC reality series, "Freakshow."

Todd Ray, who runs the Freakshow, said he considers Owen to be the strongest man alive.

"When he was confronted by death, he beat it," Ray told HuffPost. "Most people would be depressed, but he looks like he's happy."

Some might think the fact that Owen is performing at a Freakshow is exploitive, but Ray believes that the shock factor of the eyeball is only one part of the picture.

"When you see his missing eyeball, it's shocking. You can see fully into his skull," Ray said. "But his story is so touching that every audience is touched and amazed."

Owen hopes to have more opportunities to tell his story and is grateful for all the attention he has received, especially since his appearance on "Freakshow."

"One guy wants to make me a custom eye patch!" he said excitedly. "But really what I want is to go back to becoming the main breadwinner for my family." 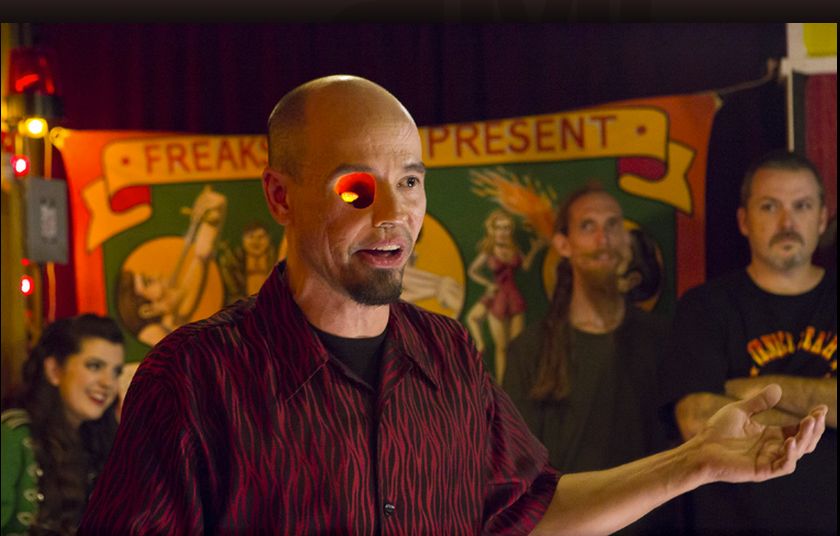 1 / 5
Billy Owen And His Missing Eyeball
Former motorcycle mechanic Billy Owen is a true medical miracle, having survived a rare form of cancer that caused him to lose half of his face, including his right eyeball.
AMC TV