Planets orbiting binary star systems have to deal with the stresses of more than one star. But new research reveals that close binaries could be as good as singles when it comes to hosting habitable planets. Low-mass twins could make the best hosts, because their combined energy extends the habitable region farther away than would exist around a single star.

After modeling a variety of binary systems, two astronomers determined that stars 80 percent as massive as the Sun, if close enough together, could allow for conditions that would be ideal for hosting habitable planets.

"Potentially, life could exist even more in binary systems than it does in single systems," Joni Clark, an undergraduate at New Mexico State University, told Astrobiology Magazine. Clark worked with astrophysicist Paul Mason of the University of Texas at El Paso.

Low-mass stars are two to three times more common than the Sun. Their sheer numbers may give them greater odds for hosting planets. But their smaller size also means they have more ultraviolet radiation early in the life of the star and dangerous solar winds in the habitable zone, both important when it comes to maintaining a niche for life to exist. Planets must lie extremely close to small single stars to reap the benefits, a position that brings a number of challenges. Such planets are more prone to be tidally locked, with one face permanently turned toward its sun, and to receive the brunt of any stellar activity. [9 Exoplanets That Could Host Alien Life] 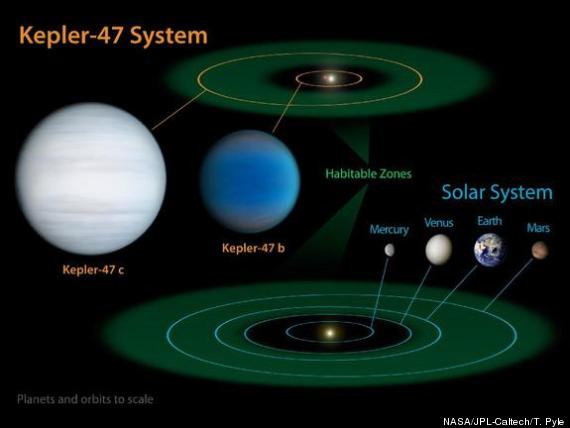 Binary system Kepler-47 contains at least one planet in its habitable zone. The two stars have different masses, however, and so the habitability of such planets is limited by the shorter lifetime of the larger and more massive star.

But when two such stars are closely paired, their combined energy extends the habitable region farther away and makes it larger, minimizing some of the threats faced by planets orbiting low-mass stars.

"We have much more room here for planets to hang out," Clark said.

Not just any binary system will work, however. Habitable zones receive the best effect when the low-mass stars are close together, circling each other every ten days or less. Radiation of all types coming from two such closely bound stars would be more consistent, and the planets orbiting them would resemble that of a planet orbiting a single star.

But when the stars are farther apart, the planet's orbit is more likely to be unstable as it feels the tug of gravity stronger from first one star and then the other. When stars are spread out over a distance, orbiting planets would experience significant changes in temperature. With a large enough gap, planets would travel around only one star, with the possibility of occasionally entering the danger zone of the other.

"There are many regions around binary star systems where having a stable orbit simply isn't possible," said Stephen Kane, of the California Institute of Technology. Kane, who studies the habitable zones of planets orbiting binary stars, was not involved in Clark and Mason's research.

Living conditions on the planets would vary based on cloud cover, which could help to both insulate the planet and shelter it from ultraviolet radiation. Such cloud cover could help to protect the planet from the changes it would encounter as it orbits closer first to one star and then to the other.

"How the temperature at the surface of the planet will vary depends on the properties of the atmosphere and its ability to absorb this flux and temperature variation," Kane said.

Clark and Mason simulated a number of close binary systems, calculating the temperatures and radiation that could exist for planets in orbit over the lifetime of the star. They presented their results at the American Astronomical Society meeting in January. After factoring in cloud cover and flux from the stars, they determined that the steadiest situations would come from binary twins, stars of approximately the same mass. Of these, a pair of stars 80 percent as massive as the Sun would hit what Clark called "the sweet spot," though a range of twins and other special combinations would also work well. 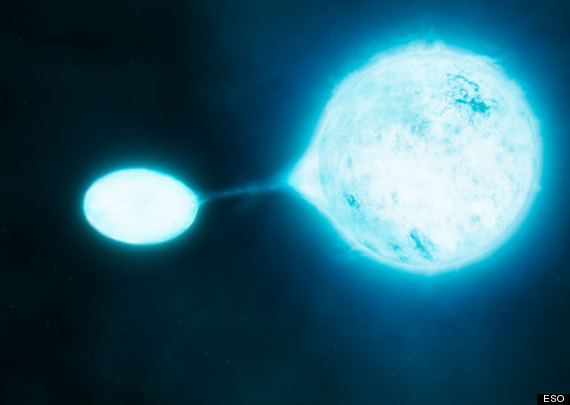 Mergers between stars, the ultimate fate of around 20–30 percent of O-type stars, are violent events.

For close twin stars, "because they're similar masses and so close, it is very likely that they were, if you will, born at the same time," Clark said.

Such stars would have similar lifetimes, dying out in approximately the same time frame, but have a habitable zone 40 percent farther away than the single star counterparts.  In the case of the lower-mass stars, such periods could far supersede the Sun's lifetime, lasting as long as twenty billion years.

"Other groups have recently shown that planets close to stars of any type suffer water loss, like Venus, and atmosphere erosion, mostly early in the star’s life. These effects may occur even for planets with magnetic field protection," Mason said.  "The beauty of close binaries is that their habitable zones are located farther out."

Kepler-47 provides a different system with fascinating properties. Instead of twins, the famous "Tatooine" system contains one star as massive as the Sun, and another only a third the size. A single planet orbits in the habitable zone, though it is too massive to be considered a good candidate for life. Eventually, the larger star will suffer the same fate as our Sun, swelling up into a massive red giant and changing the survivability for the planets orbiting the pair. The smaller star would live on, scant comfort for the planets that saw their habitable regions shift. Still, over the lifetime of the more massive star, the smaller star would provide extra light and heat that could be a bonus to potential life. [How 2 'Tatooine' Planets Orbit Twin Stars (Infographic)]

Because low-mass stars are so pervasive, and because most stars in the galaxy are locked in binary pairs, the chances of finding close, low-mass binaries is high, according to Clark and Mason. Though they caution that they haven't run the exact numbers, Mason says that such systems would be "not uncommon at all," potentially ranking such pairings as numerous as Sun-like single stars.

"I can imagine that a 0.8 solar mass binary, with a separation of less than a tenth of an astronomical unit [the distance from the Earth to the Sun], would have many possibilities of stable orbits within the habitable zone," Kane said.