Though anything but a soils science expert, as a premed student some 25 short years ago and after a year as a farm intern, I felt I knew enough biology and farming to attempt a six-month bio-nutrient soils study on an organic farm. Jeffrey Colle' of Colle' Agriculture, green lit the project and David Retsky, owner of County Line Harvest Farm in Thermal, Ca, provided the test plots for the six crops he was about to plant. Ignorance is bliss and little did I know what I was in for.

Arriving just in time for the planting, I had the amendment, Sea-Crop® in hand, ready to apply. To my horror, I learned that the farm didn't have the equipment to inject a liquid amendment into the soil. Of course my client asked if I'd inquired whether the farm had the equipment. Ignorance not being bliss this time, I realized that I didn't even know enough to ask -- how demoralizing. My client's reply: "I'm sure you'll figure it out."

In a panic, I furiously searched the internet looking for the right equipment. A source in Florida was willing to sell me equipment at $5,000 per injection wheel. Well, hmmmm -- as there was no budget for such a line item, I pleaded with the salesman to lend, borrow, donate his equipment for my study. He knew I was in trouble so he pointed me to Yuma, Arizona, to a person who could set me straight, one of the most brilliant agronomists in the country. 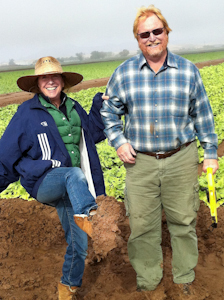 In the midst of a catastrophic faux pas, I called Steve West and told him of my situation. Knowing I was sinking fast, he invited me down to his Yuma lab that day, to lend me the appropriate equipment and to provide a two day intensive ensuring all the various procedures were executed correctly, a definitive protocol for every action, every step of the way. Not a proponent of organic farming, his contrary perspective is for a later story -- but what would I have done without his help?

A six hour drive later, I was at his doorstep with the hesitant question: "Why are you doing this?" ...a complete stranger lending me his equipment including two days of intensive training, was incomprehensible. He said simply, "At the beginning of my career a number of people saved my ass and it's time to pay it forward."

Patiently, he calculated the proper dosages, a percentage of solution, based on a per acre application, for six plots, each one consisting of four six foot wide beds, each one 30 feet long. He showed me how use a pressurized sprayer strapped to my back and how to control my pace to evenly dispense at a specific rate, a properly diluted solution based on the pressure in the tank -- oy, the math! He even built the arms of the sprayer specifically to fit the width of the test beds.

Armed with sprayer and an embryonic wealth of knowledge, I was suddenly well equipped to initiate this trial. As it progressed, new doors continued to open. The Linus Pauling Science Center agreed to conduct tissue sample testing for complex compounds, vitamins, antioxidants and other important nutrients inherent to each vegetable. With additional guidance from agronomist Sandy Menasha at Cornell University and from hours spent on the phone with one of my heros, Dan Kitterage, a master of bio-nutrient dense soil practices, I knew I was in great hands. Sandy explained the principles behind the study methodology. Dan stressed the value of the Brix reading and monitoring the soil conductivity. In addition, Arthur Zeigler, Sea-Crop developmental scientist, answered a constant stream of questions throughout and analyzed the results from four different labs.

Paradoxically, the health of just two feet of soil largely determines the quality of the world's food. A hot new scientific frontier, the study of bio-nutrient dense soils is modeling this two feet and its impact on nutrient uptake. The premise is that a rich, healthy soil dramatically increases a crop's nutrient content, while sustaining soil quality. That being said, the study results where astonishing.

The amendment used, Sea-Crop®, is a microbial stimulant derived from the mineral density flowing from mountain streams into oceans. Sea-Crop® is mined from this flow and from underwater volcanic sources rich in minerals and the basic elements for plant life. After desalinization, it is ready for use.

To note just a few of the significant increases found in all six crops: cauliflower, swiss chard, carrots, beets, fennel and spinach, the average increase in crop yield was 62%, protein increased 13%, Brix test increased 35% and Phenolics 10%. 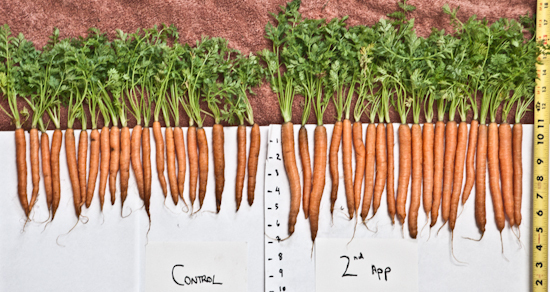 In a world hungry for nutrition this is a truly significant discovery. As I've mentioned in previous stories, a healthier soil will pass its nutrient capacity onto its crops, which in turn, pass higher nutrient dense foods on to all living things.

To wild and successful adventures,