A biodegradable, implantable battery could help in the development of biomedical devices that monitor tissue or deliver treatments before being reabsorbed by the body after use.

“This is a really major advance,” says Jeffrey Borenstein, a biomedical engineer at Draper Laboratory, a non-profit research and development centre in Cambridge, Massachusetts. “Until recently, there has not been a lot of progress in this area.” 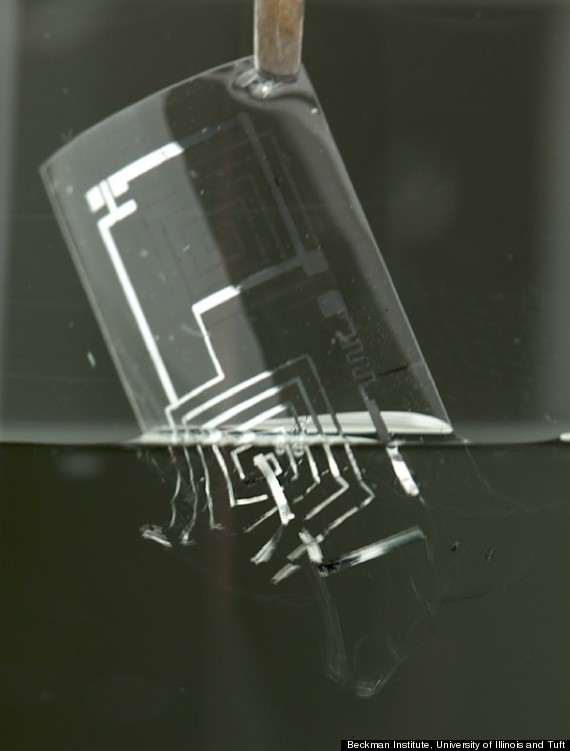 A biodegradable integrated circuit during dissolution in water in 2012 at the University of Illinois.

In 2012, materials scientist John Rogers at the University of Illinois at Urbana-Champaign unveiled a range of biodegradable silicon chips that could monitor temperature or mechanical strain, radio the results to external devices, and even heat up tissue to prevent infection (see ‘Biodegradable electronics here today, gone tomorrow’). Some of those chips relied on induction coils to draw wireless power from an external source.

But wireless power transfer is problematic for devices that need to go deep within tissue or under bone, says Borenstein. The components that receive the power are also quite complex, he says: “anything you put in there is going to take up space”. To provide a tidier solution, Rogers and his collaborators have now created a fully biodegradable battery.

Their devices, described last week in Advanced Materials, use anodes of magnesium foil and cathodes of iron, molybdenum or tungsten. All these metals will slowly dissolve in the body, and their ions are biocompatible in low concentrations. The electrolyte between the two electrodes is a phosphate-buffered saline solution, and the whole system is packed up in a biodegradable polymer known as a polyanhydride.

Currents and voltages vary depending on the metal used in the cathode. A one-square-centimetre cell with a 50-micrometre-thick magnesium anode and an 8-micrometre-thick molybdenum cathode produces a steady 2.4 milliamps of current, for example. Once dissolved, the battery releases less than 9 milligrams of magnesium — roughly twice as much as a magnesium coronary artery stent that has been successfully tested in clinical trials, and a concentration that is unlikely to cause problems in the body, says Rogers. “Almost all of the key building blocks are now available” to produce self-powered, biodegradable implants, he says.

All versions can maintain a steady output for more than a day, but not much longer. The team hopes to improve the batteries' power per unit weight — known as power density — by patterning the surface of the magnesium foil to increase its surface area, which should enhance its reactivity. The authors estimate that a battery measuring 0.25 cm and just one micrometre thick could realistically power a wireless implantable sensor for a day.

The devices could also find environmental applications, says Borenstein. For example, to help remediation efforts during an oil spill, environmental officials could drop hundreds of thousands of tiny wireless chemical sensors across the slick. These would later simply dissolve in the ocean. Space is less of a constraint in these applications: a stack of several cells, for instance, can produce up to 1.6 volts — enough to power a light-emitting diode or generate a radio signal.

Magnesium batteries are not the only solution. Last year, biomaterials scientist Christopher Bettinger of Carnegie Mellon University in Pittsburgh, Pennsylvania, unveiled an edible sodium-ion battery with electrodes made from melanin pigments. But Rogers’ team report that their magnesium batteries have a relatively higher current and power density, and last for longer.

Borenstein hopes that further research into both types of batteries could eventually yield implantable drug-delivery devices that are controlled by radio signals, or that dispense pharmaceuticals in response to a specific acute problem, such as an epileptic seizure.