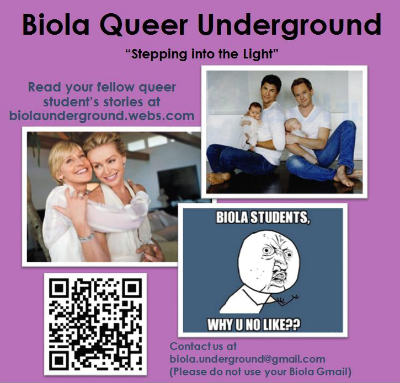 If you imagine American Christianity as a 1950s city in the Midwest, Biola University would be its Central High. Gigantic (145 academic programs; 95 acres; more than 1 million square feet of building space in 40 major buildings) and long-established (founded in 1908), Biola is one of the big dogs of Christian colleges. And as big dogs go, it is definitely one of the more conservative ones. On the Biola website, under "Our Vision," it says, "Biola University's vision is to be an exemplary Christian university, characterized as a community of grace that promotes and inspires personal life transformation in Christ which illuminates the world with His light and truth." Located in Los Angeles, Biola is, in short, the sort of place where, back in the day, the Church Lady would have been head cheerleader.

So you can imagine my surprise when, while working in a Starbucks on the afternoon of May 9, I received this email:

I'm a student at Biola University, which is one of the country's most prestigious evangelical universities, and arguably one of the most close-minded when it comes to LGBTQ issues. I am a huge fan of your work.

At Biola, if a student is openly in a same-sex relationship, they're almost certain to be expelled -- and God only knows how the school would handle those who are transgender.

I am the co-founder of Biola's secret LGBTQ-Straight Alliance. And we just staged a mini-uprising at Biola to announce our new website, Biola Queer Underground.

This morning we had a group of students from other universities come on to our campus and pass out business cards with our website information on it. We also had our friends put up posters that read Biola Is Queer, and we placed QR codes for our website on popsicle sticks which were then placed all over campus.

My favorite part was a sign we made that had a picture of Ellen and Portia, and Neil Patrick Harris and David Burtka, with a Biola, Why U No Like?? meme underneath.

Anyway, we would really appreciate anything you might do by way of letting the world know we're out here (ha, ha). Of course, none of my personal information could be disclosed; I'm trying to remain anonymous as possible, since we're all facing possible expulsion by doing this.

What?! A group of gay underground student activists -- at Biola?! That's like being a snickerdoodle in the inside pocket of Cookie Monster's sports coat!

I asked my new underground gay activist student friend if I could call him/her/[I'll never tell]. After receiving the number to call, I immediately stepped outside: the walls, after all, have ears (plus, they block signal reception).

"So you're really forming this club?" I asked the person on the other end of the phone. "At Biola?"

"That's what we're doing," came the voice of a kind and intelligent young adult. "We have to. This whole school is so oppressive. What we're doing is so needed here."

"This is beyond amazing. Aren't you afraid you're going to get caught? And expelled?"

"Oh, we'll definitely get expelled if the school finds out we're doing this. That's for sure. I'll send you an article from our campus newspaper in which Chris Grace, Biola's vice president of Student Development and university planning, is quoted as saying that any student who 'explicitly challenging or violating' the school's policies on homosexuality will be expelled." The student did send me that article; Mr. Grace did say exactly that.

"Do your parents know you're doing this?"

"Not at all. Definitely not." The extra emphasis made sense. It costs some $40,000 a year to attend Biola. I can't imagine too many of the students' parents being thrilled at their child being expelled from the school for being unrepentantly gay.

"How did you even start this club?" I asked.

"Well, I'm [gay/lesbian/transgender/guess you'll have to guess, Mr. Grace] and knew a few other students who were the same. So one day I was talking with a friend, and we came to realize how badly a club like Queer Underground was needed at Biola. So we decided to start that club ourselves. We held our first meeting this past winter. From there the club grew very quickly, and we've been holding weekly meetings ever since."

"How did you find people to join Biola Queer Underground?" I asked. I imagined her/him standing in the shadows of the student union building, wearing dark glasses, a fedora, and a belted trench coat with the collar turned up, whispering to students passing by, "Pssst. Gay? Wanna be in a club?"

"Telling people that we exist is definitely the tricky part. We have to be so careful. But the truth is, once we started the club, I could just... we could... I mean, not to sound all charismatic about it, but we could just feel when we were dealing with a student who would benefit from it. But even then, we're very careful. We have this whole system set up, where we essentially, and very delicately, vet a person through talking to and connecting with their friends and associates. It's a subtle process. But it works. By the time we actually extend someone an invitation to join us, we know that's the right thing to do. And so far it's been great. It's surprised even us how many people have joined the group."

"No leaks so far. But after the event we did this morning, we're all feeling the pressure. The whole security and safety thing at Biola has always been really pronounced: There are always security guards all over campus. Which is great. But that whole apparatus really kicked into gear after we had spread our stuff all over campus this morning. Within 10 minutes, everything we put out had disappeared. All of it, gone. Now everyone in security is looking for us."

"It is. But we blend. If there's one thing gay Christians know how to do, it's blend."

"What would you like for me to tell people?" I asked.

"Just tell them we're here. That's all we want, is for people to know that we exist. Even though our group is large, we can't help but feel awfully isolated, having to be so secretive, always knowing that at any moment our whole world might be turned upside down and shaken hard, just because of who we are. So it would be a huge comfort for us to know that out there in the world people know of us, and support us in what we're doing. From deep underground we are calling for love and acceptance. It'd be nice to know that our voice broke through the surface, and that someone out there actually heard us."