The age on your driver's license may not be exactly correct -- well, for certain parts of your body anyway.

A new study, published Monday in peer-reviewed journal Genome Biology, suggests that we all have an internal biological clock that tracks the aging process -- and may reveal the true age of our cells and tissues. It's hidden right in our DNA.

"The epigenetic clock really allows someone to objectively measure the age of cells and tissues," study author Dr. Steve Horvath, a professor of human genetics and biostatistics at the University of California, Los Angeles, told The Huffington Post. "Therefore, it can be used to study aging."

This internal "timepiece" may also be used to compare the various ages of elements in the body. For instance, in his research, Horvath found that female breast tissue ages several years faster than the rest of the body, which may explain why breast cancer is the most common cancer in women. Cancer also greatly accelerates the age of affected tissues. 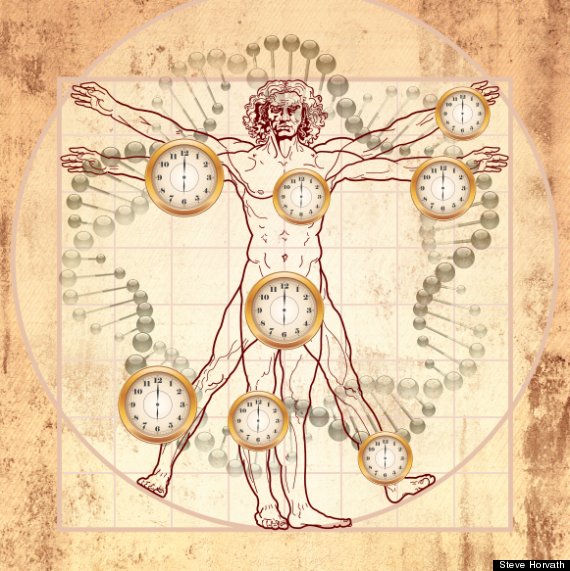 The original version of the Vitruvian Man by Leonardo da Vinci visualizes the ideal physical proportions of man. The epigenetic clock allows us to move beyond measuring physical proportions and to add a dimension of time: We are now able to quantify the age of most human tissues, organs and cell types. (Image and caption courtesy of Steve Horvath)

Horvath came across this biological clock after spending several years searching for an internal predictor of aging. He turned to DNA methylation, which is the biochemical process by which certain molecules that make up DNA are altered. Specifically, Horvath charted the effect that age has on this process -- from pre-birth to 101 years -- using nearly 8,000 samples of 51 types of tissue and cells taken from throughout the body.

From there, Horvath and his team were able to identify 353 markers within human DNA linked to methylation. They change with age and are present throughout the body. When evaluated together as a graded average, these markers provide a highly precise estimate of age. Eureka!

This allowed Horvath to develop an algorithm to determine the age of a certain sample, which he has opted to share publicly on the Internet. (UCLA has also filed a provisional patent on the research.)

While practical applications could include a test for cancer -- since malignant cells tend to age faster -- Horvath is more focused on how this biological clock relates to aging.

"Hopefully it can be used to study what causes aging and age-related disorders," he told HuffPost, adding that researchers could then focus on therapeutic intervention. Horvath likened potential procedures to resetting a clock.

But first, Horvath and his team must determine whether the biological clock relates to the process that causes aging. Only then could the clock be potentially reset.