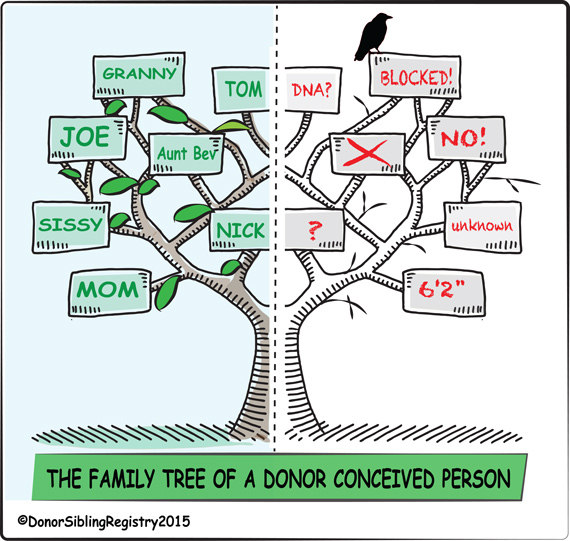 Most U.S. citizens raised by their biological parents never question whether the information on their birth certificates is accurate. With the evolution of adoption and alternate means of conceiving a child, "accurate" is an increasingly subjective term. Is the purpose of a birth certificate to portray a biological account of a person's birth parents, or is it an account of one's "legal" parents -- the ones responsible for raising them?

The U.S. Bureau of the Census created Birth Certificates in the beginning of the 20th Century as a means of tracking the effects of disease and urban environments on mortality rates. The task of issuing birth certificates was transferred to the Bureau of Vital Statistics, a division of the Department of Health and Human Services, in 1946 where it was decentralized into our familiar state systems of today.

As the document evolved over the last century, so has its purpose. It has become an important (if not our sole) means of identification when we obtain anything from a driver's license to a passport. It has also become an indispensable tool for genealogical researchers.

So how do we decide who should be listed in the categories of "Mother" and "Father" on a birth certificate?

For donor-conceived and adopted people, there is oftentimes a clear distinction between one's genetic parents, those with whom you share DNA, and one's legal parents, the ones who have rights and responsibilities attached to their parenthood, and most-times, the ones who are raising them.

However, ever-increasing numbers of individuals in both situations are clamoring for reform, namely their right to have a birth certificate that portrays accurate biological background as well as their legal parentage.

Despite the fact that "legitimate/illegitimate" language was replaced with the mother's marital status in 1979, the practice of amending birth certificates to reflect legal parentage persists to this day. In most states, adoptees original birth certificates remain sealed.

No federal birth certificate revision has been issued to address donor conception scenarios. Therefore, married couples in all states who use donor sperm are automatically granted the right to list the husband as the father and women who use donor eggs to become pregnant are listed as mothers on birth certificates. No official asks them if they used any donated gametes to conceive, or for any information about the donor who is genetically related to the child. In addition, in some states, the biological parent and the gay co-parent can both be listed on the birth certificate.

So many believe that they share the same ancestry and medical background as both parents listed on their birth certificate, when instead, they were adopted or an egg or sperm donor has been used, and the child shares their DNA with an unknown person(s).

There is a whole host of concerns raised by adoptees and the donor-conceived, including the right to identity, ongoing medical history, biological heritage, and the right to know their genetic parents. How do we deal with an adopted or donor-conceived person's right to an accurate birth certificate? Looking ahead, do we keep the same birth certificate structure, or is some sort of adjustment needed?

Our federal government has been agonizingly slow to address these issues, if it acknowledges them at all. There is a long history of deferring what it considers "family law" to the states, including how parentage is listed on birth certificates and whether or not adoptees can obtain their original birth certificates.

This has caused many to attempt to circumvent their state system by hiring private detectives, posting their information on the Internet, or using commercial DNA testing companies. 23andme, Ancestry.com and Family Tree DNA now have hundreds of thousands of submissions and are helping connect thousands of family tree branches to one another. In addition, almost 12,500 donor-conceived people have connected with their genetic relatives on Donor Sibling Registry (DSR). Unfortunately, none of these methodologies guarantee the finding one's biological parents.

The birth certificate problem exists in other countries as well. As adoptees and donor conceived people across the world find their genetic relatives and parents, some have taken the task of proper documentation into their own hands.

Earlier this year, a donor-conceived woman in the UK successfully had her birth certificate amended to remove her legal father, and have the place for "father" blank, as she has an unknown biological father (sperm donor).

Currently, a man in Australia is petitioning the courts to do the same, removing his (now deceased) father from his birth certificate, saying, "I'm doing this because I want an accurate and factual record of my conception, of birth." He goes on to say, "It's not just for my kids but also my descendants in that if anybody in the future was to conduct genealogy research on our family, I don't want them to go down the wrong path and if they have an inaccurate birth record, they will basically believe a lie."

Adoptees are expressing the same concerns about descendants being able to connect the dots when researching their ancestry. Because two birth certificates exist in adoption, there's no guarantee that the factual one would be released & therefore "searchable" by descendants. This has led many adoptees in the U.S. legally change their names to reflect biological relationships.

Ignorance of biological ancestry has had devastating consequences for some. In the U.K. in 2008, twins that were separated and adopted at birth unknowingly married each other. This year, a Brazilian couple found out after they were married that the same biological mother had abandoned them as infants. Random meetings amongst half siblings are not uncommon, as many have reported in the news, and on the DSR. One mom realized that a distant relative, one whom she and her children had spent time with at family gatherings, had donated sperm and was in fact the biological parent of her children.

Although cryobanks claim to limit the number of births to one donor, this clearly isn't the case. We have seen as many as 200 half siblings from the same donor connect on the DSR, and there are many more groups of 30, 50, 75 and more... and these are only those families that have registered on the website. Clearly, this poses a public health crisis, in the case of shared genetic illness, or if the offspring are in a concentrated geographic area and/or do not know they are donor-conceived.

The U.S. does not require cryobanks to keep accurate records on sperm donor families, nor are they forced to limit the numbers of children born to any single donor. If a donor reports a serious illness, there is no way for the sperm banks to notify all involved families. Diseases such as NF1, Lynch Syndrome, Cystic Fibrosis, and HCM, a sometimes-fatal genetic heart condition, have all been reported on the DSR, and have been written about in the media. Hundreds of other medical conditions have also been reported and shared amongst DSR families and the sharing of this type of information has saved lives. The problem is that the DSR is a voluntary website, and in most cases, all families will not be listed and contactable.

The US Surgeon General reports on their website that, "A recent survey found that 96% of Americans believe that knowing their family history is important." To help Americans focus on the importance of knowing family health history, The US Surgeon General along with the Department of Health and Human Services created the "Family Health History Initiative." The website notes that, "Tracing the illnesses suffered by your parents, grandparents, and other blood relatives can help your doctor predict the disorders to which you may be at risk and take action to keep you and your family healthy." It certainly begs the question why the Department of Health would, by its refusal to address this birth certificate crisis, prevent millions of donor-conceived and adopted people from having access to this information.

The United Nations felt the need to address identity in Articles 7 and 8 in its Convention on the Rights of the Child:

"The child shall be registered immediately after birth and shall have the right from birth to a name, the right to acquire a nationality..." (CRC Article 7) and "States Parties undertake to respect the right of the child to preserve his or her identity, including nationality, name and family relations..." (CRC Article 8).[3]The U.S. has yet to ratify this treaty.

Donor conceived adults in the International Donor Offspring Alliance list these as their "Summary of Aims":

We assert that people have a moral right to know the truth about their personal history. Where the state has custody of relevant information it has a duty not to collude in deceiving or depriving individuals of such information.

Adoptee rights organizations have been fighting for the right to identity, including the unsealing of original birth certificates, for decades. American Adoption Congress states on its website:


The American Adoption Congress believes that growth, responsibility, and respect for self and others develop best in lives that are rooted in truth. The AAC is therefore committed to achieving changes in attitudes, policies, and legislation that will guarantee access to identifying information for all adoptees and their birth and adoptive families.

Since 1902, the U.S. has made twelve Standard Birth Certificate revisions. Legitimate concerns raised by the adoption and donor communities suggest a thirteenth federal revision should be made to accurately portray biological identity on birth certificates and ensure that procedures are uniform in every state.

Most in the adoptee rights community feel that issuing two birth certificates to adoptees is a leftover relic from an era of shame and secrecy and should be abolished altogether. We believe it is important to issue one certificate only so information cannot be hidden from the individual by parents or the government.

It is no question the best interests of the child should be paramount. With this in mind, for both adoptee and donor situations, we would recommend a U.S. Standard Birth Certificate revision expanding the "two parent only" format to include categories for Legal Parents, Genetic Parents, and Surrogates. In the case of adoptees, we would like to see the child's birth name recorded along with his or her legal/adoptive name.

If the birth certificate is amended in any way (such as adding legal parents when an adoption is finalized) it should be unlawful to omit any original information, including biological relations, from the new copy. We would also seek to abolish anonymous donor conception, or at the very least, list the clinic and the donor ID on birth certificates.

We understand and acknowledge that this recommended system is not perfect. Whether a child is adopted, donor-conceived, or not, parents can always lie on a birth certificate. As donor conception is more easily hidden than an adoption, we advocate the establishment of a national registry where clinics and hospitals would be required to record donors and their children.

This has already taken place in several countries, most recently in September 2014 in Ireland, which is in the process of abolishing anonymous gamete donation and creating a national birth register for donors and their offspring. The Children's Rights Alliance was quoted in the Irish Examiner saying, "We know the pain caused to the many adopted people who can't establish the identity of their parents. This bill will ensure that donor-conceived children will not share the same pain."

There has been much debate in the donor and adoption communities on the "true" purpose of a birth certificate. Certainly, its original and enduring purpose is to keep accurate records for the good of public health. For the individual, a birth certificate has become an indispensable proof of identity and ancestry. It should be of utmost concern to our Department of Health that birth certificates are serving neither purpose for the adopted and donor-conceived.

The time for birth certificate reform is now. Unfortunately for many, it should have happened decades ago.