Kaichang Li was wading in the surf off the Oregon Coast when he spotted the future of superglue. Beneath the surface, a group of blue mussels anchored themselves to slippery, uneven rocks -- holding strong despite a turbulent tide.

"My friend and I were looking for crab, but didn't get any," recalls Li, a professor of wood science and engineering at Oregon State University.

Desperate not to leave empty-handed, they had moved on to harvesting mussels.

With the help of a large piece of driftwood, they pried the shellfish free. Li's friend took some home to eat; Li, eager to understand how the creatures achieved their remarkable grip, carried his share back to his lab.

The recipe he would later glean from hundreds of translucent tethers produced by the shellfish is now leading to the development of powerful soy-based waterproof adhesives -- a welcome replacement for the formaldehyde-infused versions traditionally used in cabinets and other furniture.

The innovative glue is just one example of how the burgeoning field of biomimicry is benefitting the health of humans and the planet. By looking at nature, researchers are discovering how to create color without chemical-based dyes, deter pests without pesticides and make products that can be absorbed back into nature rather than spending hundreds of years in a landfill or a plastic garbage patch in the Pacific.

PHOTO GALLERY
SLIDESHOW: 15 Lessons From Nature On How To Live Healthier, Happier And More Sustainably

Nature's genius has always been on display, but it has taken a "perfect storm" of public health crises, environmental losses and scientific gains for humans to pay attention with an eye towards self-improvement, says Janine Benyus, co-founder of Biomimicry 3.8, a combined non-profit institute and for-profit consulting group.

The “ingenious” synthetic chemistry industry registers about one new chemical a day for potential commercial use, notes Dr. Philip Landrigan, chairman of the department of preventative medicine at the Mount Sinai School of Medicine in New York City. "Almost all are petrochemical-based," he says. "And almost none are tested for toxicity."

Meanwhile, nature has been evolving "a very high tech enterprise" over the last 3.8 billion years, says Benyus. "Now that we're getting a really good look at that, we're beginning to become a little more humble about our own technology -- and the fact that we could use some help."

Blue mussels are among a growing roster of creatures, from spiders to sharks, offering guidance to the U.S. military as well as private companies that include Columbia Forest Products Inc. Using Li's adhesive in its PureBond plywood, the manufacturer has reduced its dependence on petrochemicals as well as its production of toxic chemicals -- without additional costs to the consumer.

"For years, the industry has used glue that leaches formaldehyde into the environment long after the wood is made," says Joanna Beckman, a spokeswoman for Columbia Forest Products. The old glue, which does a good job of waterproofing, has been implicated in everything from sick building syndrome to cancer.

"There are a set of common principles that life adheres to; it has no choice," says Mark Dorfman, a green chemistry naturalist at Biomimicry 3.8. "To survive, it can't poison its immediate environment. If it raises young, it can't deplete its resources."

These are the very problems that concern environmental and public health scientists. However, Dorfman suggests that both the problem and the solution may rest heavily on one of nature's favorite building blocks: carbon. The ability to mimic photosynthesis is the “holy grail” of biomimicry, he says, whether that's tapping sunlight's energy or using carbon from CO2 to produce the complex carbon-based compounds used throughout industrial society.

"That's so enormous," Dorfman says. "Right now, both of those are based on the extraction of fossil fuels -- coal, oil or natural gas."

In nature, organisms obtain carbon by breaking down CO2 with help from an enzyme called rubisco. By mimicking the enzyme, Novomer Inc., a sustainable chemistry company, is learning how it can use CO2 as a starting material for plastics that include types used for water bottles and CD cases. Not only could the resulting products sequester carbon, but they also may reduce the need to extract fossil fuels -- both helping to slow climate change. The consumer also wins by avoiding exposure to air pollution and toxic chemicals that can leach from standard plastics.

To date, Novomer has developed a resin used in electronics. Next up: a BPA-free liner for cans.

Of course, replacing a toxic compound with a new natural one isn't always the answer, says Dr. Ted Schettler of the Science and Environmental Health Network. “There are plenty of poisonous plants out there, and marine organisms that create toxins that make people sick,” he tells HuffPost.

The "likelihood of toxicity is lower" if it's nature-made, says Dr. Landrigan. But he, too, points out exceptions such as arsenic and lead. Both experts agree, rigorous testing is needed for both synthetic and natural chemicals.

Geoffrey Coates, co-founder of Novomer, also notes that any new green technology needs to be economically viable. "Very few people will pay more for something just because it's green or environmentally-friendly," he says.

Half the weight of Novomer's plastics comes from carbon dioxide, which is essentially free.

"Economically," says Coates, "these polymers can be quite a bit cheaper than their petroleum-only based counterparts."

"Nature is very economical," says Javier Gomez Fernandez, a research fellow at Wyss Institute for Biologically Inspired Engineering at Harvard University. He is currently working with colleagues to develop another plastic alternative, this one inspired by a shrimp's shell and silk, and described in December in the journal Advanced Materials. The product is aptly named Shrilk.

Shrilk, like Novomer's plastic, is biodegradable. Packaging doesn't need to be around for 1,000 years, when we only use them for a few minutes, Fernandez says.

"When we look at what is truly sustainable, the only real model that has worked over long periods of time is the natural world," says Benyus. The ultimate goal of biomimicry, she says: "How do we fit in over the long haul?"

Biomimicry: How Copying Nature Leads To Healthier Humans, Planet
SLIDESHOW: 15 Lessons From Nature On How To Live Healthier, Happier And More Sustainably 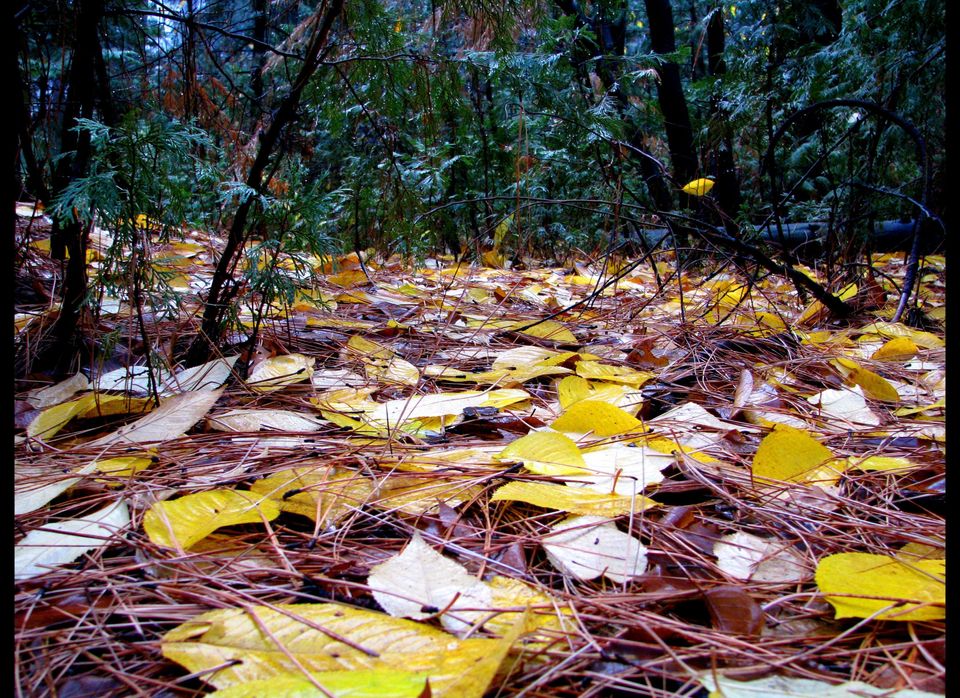 1 / 15
A WALK IN THE WOODS
One early autumn day, David Oakey and his design team at the carpet manufacturer InterfaceFLOR strolled through a deciduous forest with Dr. Dayna Baumeister, co-founder of <a href="http://biomimicry.net/" target="_hplink">Biomimcry 3.8</a>. The walkers noticed repeating patterns on the forest floor. Up close, they saw shapes, leaves and reflections. When they stepped back, the random landscape turned into a sort of uniform chaos. By <a href="http://www.asknature.org/product/a84a9167f21f1cc690e0e673c4808833" target="_hplink">replicating nature's randomness</a>, the carpet manufacturer reduced its waste and its toxic legacy. Matching the color of a standard carpet is difficult, as each dye lot can vary noticeably. This can mean tossing out replacement runs or producing material that is never needed. But now, instead of uniform carpets identical in every square foot, InterfaceFLOR is making tile with a slightly different pattern and color, so that the whole blends into an intentionally variable pattern. Any tile spilled upon or damaged could be easily replaced, with old tiles recycled into the production of other tiles. "Nature makes only what she wants, where she wants and when she wants. No waste on the cutting-room floor," writes Janine Benyus in her book, "<a href="http://www.amazon.com/Biomimicry-Innovation-Inspired-Janine-Benyus/dp/0060533226/ref=sr_1_1?ie=UTF8&qid=1317400943&s=books&sr=1-1&tag=thehuffingtop-20" target="_hplink">Biomimicry: Innovation Inspired By Nature</a>."
Rennett Stowe/Courtesy TBI