A day after Sens. Claire McCaskill (D-Mo.) and Kirsten Gillibrand (D-N.Y.) unveiled their anticipated campus rape package, a House companion version was submitted Thursday afternoon with as many Republican co-sponsors as Democrats.

Wednesday's Senate version was equally divided with four Republicans and four Democrats presenting the bill. As of Thursday afternoon, Sens. Barbara Boxer (D-Calif.) and Lindsey Graham (R-S.C.) had added their names as co-sponsors.

"This bill represents a rare thing in Washington -- a truly collaborative, bipartisan effort -- and that bodes well for our shared fight to turn the tide against sexual violence on our campuses," McCaskill said at a press conference announcing the legislation.

The number of Republicans signing on suggests they've paid little mind to conservative pundits' consistent arguments that discussion around campus rape is overblown. For months, since President Barack Obama launched a task force on campus sexual assault, conservative writers have criticized existing data on college rape and referred to the survivors speaking out as a "mob."

Supporting legislation tackling sexual assault is hardly out of the ordinary for either party, considering the bipartisan push for dueling packages addressing the issue in the military.

McCaskill and Gillibrand suggested they'd try to get a vote in the Senate this year. However, advocates are preparing to carry on a push for the laws into the next session of Congress. 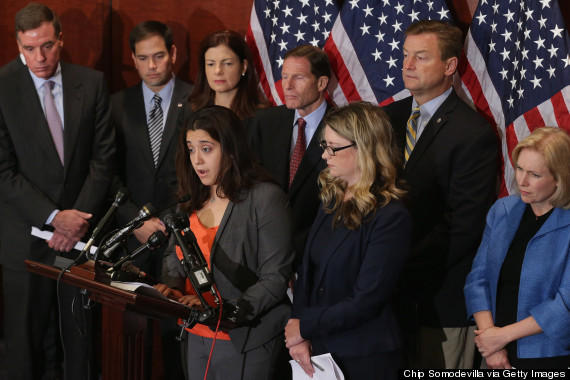 Ken Clarke
ASSOCIATED PRESS
Tory big beast Ken Clarke faced calls for his resignation following comments he made about rape sentencing policy. The then Justice Secretary was speaking to BBC 5 Live in 2011 when he appeared to suggest date rape is not always “rape”. Addressing presenter Victoria Derbyshire, he said: “Assuming that you and I are taking about rape in the ordinary conversational sense, some man has forcefully…” In this full transcript provided by the BBC, Derbyshire interjected with: “Rape is rape,” to which Clarke replied: “No it’s not.”
Rick Santorum
ASSOCIATED PRESS
In 2012 GOP presidential candidate Rick Santorum explained his opposition to abortion even in cases of rape in an interview with CNN’s Piers Morgan. He said that women who face such circumstances should “make the best of a bad situation”. When asked what he would say if his own daughter approached him, begging for an abortion after being raped, he explained he would counsel her to “accept this horribly created” baby because it was still a gift from God, even if it was given in a “broken” way.
George Galloway
ASSOCIATED PRESS
George Galloway ignited fierce debate in 2012 over comments he made relating to the sex crime allegations against WikiLeaks’ Julian Assange. On his podcast Good Night with George Galloway, posted on YouTube, he said: “It might be really sordid and bad sexual etiquette, but whatever else it is, it is not rape or you bankrupt the term rape of all meaning.” Swedish prosecutors wish to question Assange on suspicion of offences of unlawful coercion, sexual molestation and rape.
Roger Helmer
Matt Cardy via Getty Images
In 2011 UKIP candidate Roger Helmer blogged his opinion that there are distinctions between “date” and “stranger” rape. “Rape is always wrong, but not always equally culpable,” he wrote. With reference to “stranger” rape, he said: “… the victim surely shares a part of the responsibility, if only for establishing reasonable expectations in her boyfriend’s mind.”
Alan Pardew
ASSOCIATED PRESS
In 2009 then BBC football pundit Alan Pardew, now coach of Newcastle United, was forced to issue an apology after he compared a tackle by Chelsea’s Michael Essien to a rape on Match of the Day. Essien had collided with City’s striker Ched Evans when Pardew said: “He’s a strong boy. He knocks him off." As Alan Hansen interjected with “he mauls him”, Pardew added: "he absolutely rapes him."
Graeme Swan
ASSOCIATED PRESS
In 2013 England spinner Graeme Swann said sorry after comparing the third Ashes Test loss to Australia as being “arse raped” Swann made the comments on Facebook during an exchange with his brother hours after England’s loss. He took to Twitter to apologise: “Sorry to anyone who was offended by my comments in the papers today. Crass and thoughtless of me in the extreme.”
Demetri Marchessini
In May UKIP Donor Demetri Marchessini argued there was no such as thing as marital rape, claiming: “If you make love on Friday and make love on Sunday, you can’t say Saturday is rape.” When asked whether UKIP should be taking cash from a donor with such repellent views, leader Nigel Farage replied: “Possibly not.”
Judge Derek Johnson
California judge Derek Johnson was publicly admonished in 2012 for suggesting a rape victim “did not put up a fight” and that if someone truly doesn’t want to have sex, their body “will not permit that to happen.” Judge Johnson made his comments during a case where a man threatened to mutilate the face and genitals of his former girlfriend with a heated screwdriver. In documents published on the Californian Commisson on Judicial Performance, he is recorded as saying: “I'm not a gynecologist, but I can tell you something - if someone doesn't want to have sexual intercourse, the body shuts down. The body will not permit that to happen unless a lot of damage is inflicted, and we heard nothing about that in this case.”
Todd Aikin
ASSOCIATED PRESS
Failed Republican Senate candidate Todd Akin suggested in 2012 that victims of “legitimate rape” don’t need the option of abortion because they “rarely” become pregnant. He later apologised.