Often, biracial and multiracial people are made to feel that they have to choose between their races -- that they have to be one race. This in itself is anxiety-provoking, especially given that most mixed race individuals now prefer to identify as biracial or multiracial, but what further aggravates the situation is that we often don't get to choose which box we fall into. As Jaya Saxena, creator of the hashtag #ThisIsWhatBiracialLooksLike, commented, this choice is instead often made by others. Well-intentioned as most people are, it is commonplace for people to make determinations that we encompass one particular box and one box only, and through doing so, imply that we are not sufficient for our heritage because we do not look similar enough, or act similar enough, to our other race/s.

Being forced into a side is an all too familiar situation for me and other biracial people I have spoken to. I have found myself many times being classified as Asian because I have predominantly Asian features and therefore do not seem "white enough." Similarly, I am often classified as white because I do not have enough Asian characteristics. Amanda Rosenberg, also an Asian/White biracial person, has similarly experienced the feeling of being boxed, even by those closest to her -- "The Chinese side of my family can be brutal -- I can't handle spicy foods and they put that down to me being 'white.' You're constantly trying to find a home, somewhere you 'belong.'"

For me, as it did for Amanda, my experience of being forced to choose a particular identity led to a feeling of isolation, as it does for many other biracial and multiracial people. Experiences like these make me feel pressured to ignore one entire identity within me, which Sarah Townsend from UC Santa Barbara, has termed identity denial. Being grouped by society takes away the chance for me to decide what I want to be, which race I want to identify with more, if any, and puts the decision in the hands of people who are not me, and have not had my life or my experiences.

It is understandable that people would want to classify the unfamiliar  --  it is human nature  --  but the ramifications are greater than people commonly believe. According to Townsend, when biracial or multiracial people are forced to categorize themselves into one particular race, or when they feel there is a conflict between their own categorization and society's categorization of them, there can be lifelong psychological consequences including lower performance, lower self-esteem and lower motivation. 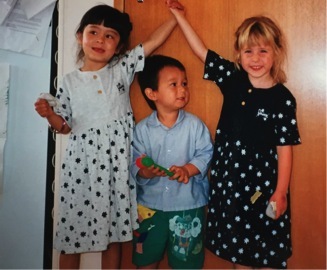 However, when biracial and multiracial people are free to decide what they wish to identify as without conflicting societal pressure, there are significant psychological benefits. A Stanford study has found that among other benefits, being biracial or multiracial enables individuals to switch more easily between racially homogenous and racially mixed environments as they have a better comprehension of different cultural mindsets. In my experience, this has most definitely been true. I have found that as a result of having elements within me that fit into multiple racial categories, I have been more easily able to switch between environments than a person of a single race may be able to. Additionally, Sarah Townsend's study has found that when biracial or multiracial people are free to choose their own identities, they can have a level of self-esteem that is even higher than monoracial people.

I love having the best of all worlds -- I am half white, half Asian, New Zealander, Chinese, and British. My blood flows with all of these things, but in my heart, I'm a New Zealander. Why? I spent most of my life there, spent my formative years there, but also, who cares why? I don't have to explain myself to anyone. It'd be a lot better if society just accepted what I choose to be inside instead of making me justify my choice, just so I can fit into their box. This is where I'm from. This is what I am. And I refuse to be boxed in.