Every year, two communities descend on Central Park in large numbers -- millions of birds of stunning variety, from hummingbirds to herons to hawks, and birders, the people who press binoculars to their faces in the hope of a glimpse.

A new documentary premiering Monday, July 16, on HBO tracks the trials and joys of the latter as they search for the former. An hourlong darling of this year's SXSW Film Festival, "Birders: The Central Park Effect" represents the fruits of five years of labor by director and birder Jeffrey Kimball. Kimball's footage of Central Park in every season is interwoven with observations from the park's most avid birders, from Starr Saphir, a Shakespearian actress turned septuagenarian matriarch of the community, to writer Jonathan Franzen.

Kimball spoke to The Huffington Post recently about his meticulous debut. Read on to find out about the holy grail for birders, the coolness issue, and why it can be easier to film a great American novelist than a nesting owl.

I started about 10 or 15 years ago, as an antidote to New York City. I needed a way to get out in nature that wasn't just taking a picture. As a little kid, I could sit still in nature for two hours if I had a fishing line in the water, because I felt like I was doing something. Looking for birds and identifying birds became a kind of type A activity in that way.

When did the birding scene strike you as rich territory for a documentary?

I moved to the Upper West Side about 17 years ago and I was shocked when I learned that a quarter of all species [of birds] in America come to Central Park each year. And when I would tell that to other people, I would see the shock on their face.

My wife is a documentary filmmaker, and I'd talk about this with her, and she'd say you've got to make a film. My background is in fiction films -- I was a music supervisor for a big part of my career at Miramax -- but I started in documentary, and I was missing the early days of having my hands on the camera. I thought, Well, I’ve never made a feature, so I’ll do something easy. I live near the park. It’ll be easy. Of course, that was four and a half years ago.

What was the process of filming in the park?

There’s a shot of an owl flying out of a hole at night. The way you get a shot like that is by putting your camera on a tripod and waiting. I remember, I looked at my phone and when I looked back the owl wasn't there anymore. I thought, "I sure hope I caught the shot."

The first couple of years, I was shooting anywhere from three to four hours up to four times a week, depending on the month. The hour I spent waiting for the owl is one of 200 hours of footage, but you use six minutes of it.

As a birder yourself, did you find you agreed with the observations of the other birders you spoke with? Was there anything you would have added?

If there’s one subject I might have gotten more into, it's how birding takes you out of yourself for a while. I’ve spent a lot of time in theaters and concerts, and usually in the back of my mind I'm still thinking about things. In birding, I’m just totally, 100-percent present. I've learned that if I have an important phone call to make, I have to set my alarm, because there’s no way I’m going to remember. It's very much a zen quality, an extension of the same concept of being able to ignore the helicopters and the sirens -- you don’t notice the rest of your life.

I never wanted to make a how-to, or to defend birding. I was trying to explore that mystical magical thing. But then my own 17-year-old, very cool son, he saw the film and looked at me and said, "OK, I get it."

Getting Jonathan Franzen to appear in your debut is no small coup. How did you get him on board?

He's written beautifully about birds, not just in [his latest novel] "Freedom," which has a warbler on the cover and is all about protecting the habitat for birds, but in some wonderful New Yorker pieces -- one called, "My Bird Problem," and another about the slaughtering of songbirds in the Mediterranean. In "My Bird Problem," he talked about his discovery of birding and how it sort of changed his life, and how it happened in Central Park. I was a big fan [of Franzen's] and had read most of his books -- "The Corrections" is one of my favorite things -- so when I read that, I thought, I would really like to see if I can get him. Then it was a question of asking around -- do I know somebody who knows somebody? Franzen obviously has more firewalls up [than the movie's other participants]. But once I was able to get to him, it was very easy. He was like, "That sounds like a worthwhile project." He didn’t show up with agents or a lawyer, he just showed up with his binoculars. And he was great.

He does contribute some of the film's funniest lines. Even before he compared birding to an addictive activity like smoking, he kind of looked like an addict -- the way he answered your questions so eloquently all while keeping an eye on the trees. He was sort of playing up the addict thing. I don’t think he's an addict type at all. He was talking about that early stage, when you're seeing "life birds." That's the first time you've seen a particular bird in your life. A birder will keep a life list of all the birds they've seen. It’s like seeing a movie star. You’ve read about them and then you see them live and that’s a real thrill. I don’t get any life birds in Central Park anymore. I don’t really get them anywhere. Those early heady days, if you’re the type of person who’s going to get hooked on birding, it tends to grab you right away.

Is there a shared personality type among birders?

One could say there's a tendency toward obsession, but I'm not sure that's really true. Certainly there are obsessive birders, and some very obsessive listers. I’ve been with people who try and try and try to get a look at a bird and then they do and they say, "Great," and turn away. In England, they call them "twitchers." They twitch when they see the bird, and walk away.

If you are an obsessive type, birding is a great way to go, because you can be really obsessive about it. But you don't have to be obsessive. For me it’s not so much the obsession, it's the magic. Being out there and suddenly seeing this wild animal. That was one of the things about my casting. I wasn't intentionally trying to find different types of people -- it just happened that way. People have asked, "Why did you cast Chris Cooper?" [a young, African-American birder]. I said, "Because he was one of the two or three best birders in the park." He really is. That he’s articulate, went to Harvard, is a smart guy, personable, good looking, the kind of person you want in the movie, the fact that he also breaks your stereoptye of the little old white lady in tennis shoes, is great.

In the film, Franzen talks about how the first time he noticed the birds in Central Park, he felt as if the trees were hanging with ornaments. How much of the thrill for birders is purely aesthetic?

It’s all about looking at unbelievably beautiful things. I always loved mammals, but mammals by and large are small and brown. Birds are unbelievably varied and colorful. Obviously the reds and greens are beautiful, but so are the brown birds, the grey birds. You catch their iridescence in the light. Even pigeons can be beautiful.

One of my favorites is called a grey catbird -- it makes a meow type of sound. It’s not one of the ornaments. It's a little red at the throat and has a little black cap, but it's mostly slate grey. But it’s just such an elegant grey.

Do you have a favorite bird?

That's kind of like asking me to name my favorite child. I love them all. My quick answer is there are two birds -- neither found in Central Park -- the big large wonderful woodpecker, which is called the New Jersey pileated woodpecker. It's the classic cartoon of a woodpecker. That’s a very close one -- and the roadrunner.

That's funny, I do. It’s probably that the same thing that I'm attracted to made them interesting cartoon birds. The other one I love is the penguin ... which I guess is also a cartoon bird!

Starr, the ringleader of the park's birders, is such a striking character, the way she seems to organize her life around birding and leading others to bird. Is there someone younger who might assume that role, or is she sort of an endangered species? (Note: missed opportunity to slip in the phrase "rare bird")

I don’t think she’s an endangered species as a type. There are other people who do what she does. Whether anybody will be as good as her or have her personality -- she used to be a Shakespearean actress, she’s funny, she loves puns. Whether or not somebody can replicate all that, I don't know.

The metaphor that you weave through the film, that birders are like birds themselves, is an impossible one to resist. Does it apply completely -- meaning, as the number of birds declines, is birding waning as well?

Not at all. I feel like there's more of everything now -- there’s more skateboarders than there used to be, more surfers. There's just more people. And birding is growing in popularity. Part of it is that you can get really good binoculars for $100 now and 20 years ago, you couldn't.

And then there's the perception of it. People are telling me they think it’s changing. I think it used to be that people didn't have an experience of what birding was, so they thought it was completely geeky. But now more and more people have had some experience of birding. The film is part of that. My brother-in-law, who’s an ex-Marine, a wonderful guy, but a big large tough ex-Marine, he saw the film at the HBO premiere. He called me the next day and said, "I've got to tell you this. I can't believe I'm saying this. I'm gardening right now and a little bird jumped up. And I can't believe I'm saying this, but I'm rooting around here trying to find it just so I can see it."

CLICK through for images of the birders and birds of Central Park: 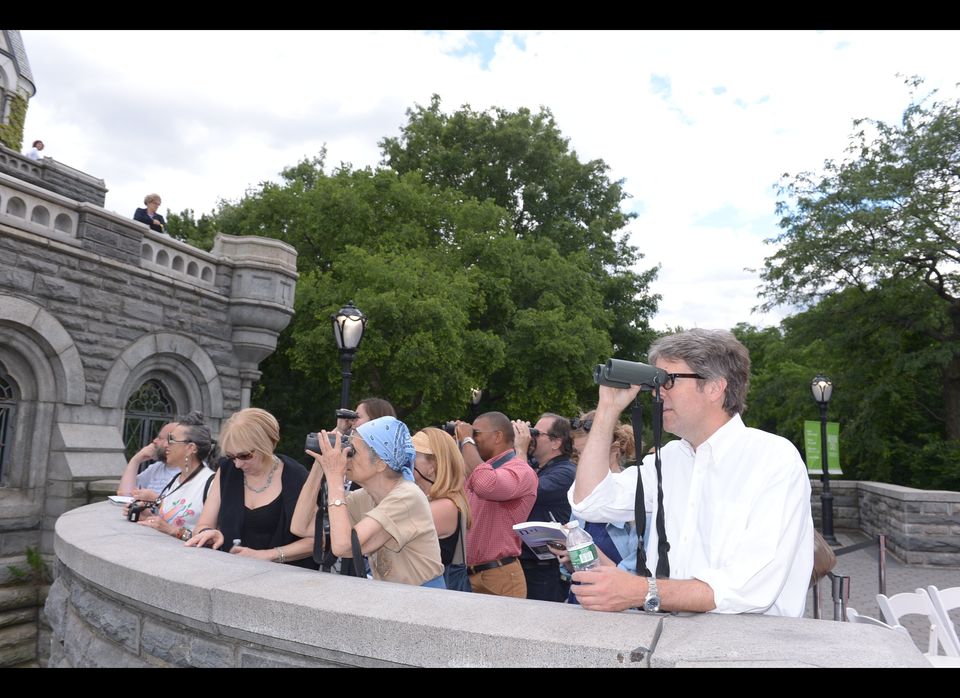