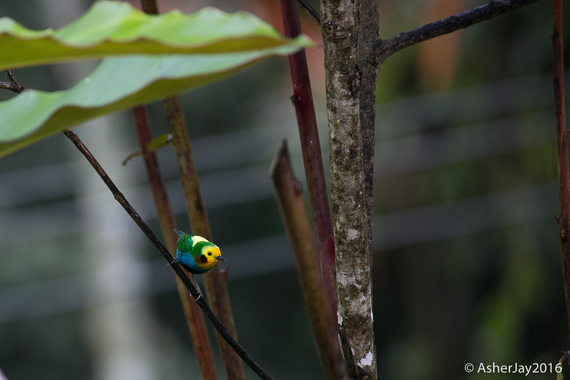 A Multicolored Tanager, essentially an impressionist painting on the move.

A few weeks ago, if someone had asked me what I thought of Tanagers, my mind would have honed in on the obvious typo in a term that obviously describes the most obnoxious phase of any human's life cycle. Oh, how the past ten days in Colombia have changed me, for now I know Tanagers refers to the second largest family of birds. That's right my brain has now allocated prime real estate for such facts as: Tanagers constitute around 4 percent of all avian species, nearly the value we assign to our collective understanding of what constitutes the universe we inhabit.

12 percent of all Neotropical species are Tanagers, they largely sport an unapologetic, bright palette of plumes, opt to co-parent their young (some species go as far as securing nannies) and show their offspring the nest's ledge when they start mouthing off two weeks after hatching. They are the aquarium fish of the skies, and are seen outside of their natural context as often as you see reef fish incarcerated at dentist clinics. This is why I love birders and divers, people who value immersive moments with wild things, where the wild things are. 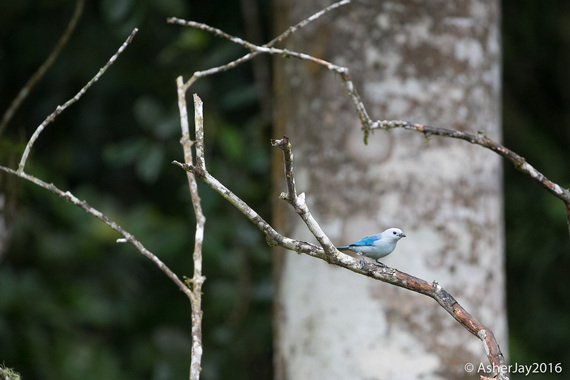 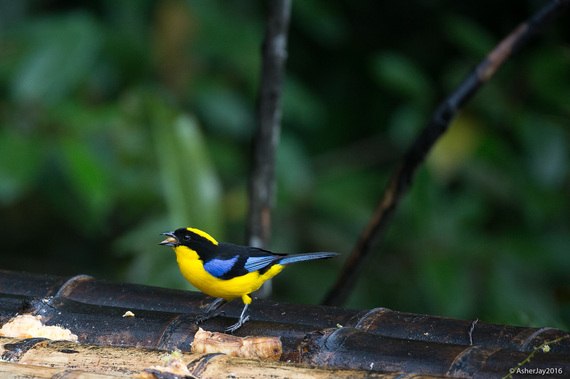 Blue-mountain Tanager, eating fruit on a feeder in someone's private backyard. Many Colombians have begun to opt out of profiting myopically from the trade in live birds, instead they put up feeders and lure eager birders and ecotourists, who would rather take photographs than cage a wild bird.

Two weeks of waking up at 4 a.m., and hiking the high altitude Northern Colombia Birding Trail, with a press team of high aptitude birders put together by Audubon Society and USAID, had validated six truths for me:
1. I was insanely out of shape.
2. I was in dire need of an intravenous caffeine drip and a sugar high.
3. I didn't know my birds, so I did not know what to look or listen for when a name was called out. It could have been the size of a Peel P50 (smallest car in the world), but I wouldn't have known where to look for it.
4. Birds move. Constantly. If you are intently staring at a bird that hasn't moved in over three minutes, it is probably a leaf.
5. A bird in the bush is worth more to the local economy than two in a cage.
6. It is a hate crime to imprison wild birds.

Birds symbolize freedom every time they take wing. To deprive them of their right to flight is to strip them off their very reason for being. This is particularly true of migratory species with highly attuned instincts to travel vast distances each season. It broke our hearts to see Bobolinks and a Dickcissel caged at a restaurant in Santa Marta. It was also sad for me to see ill kept Macaws with clipped wings and my first Toucan in Colombia behind bars. Why would anyone want to see these fantastic wild wanderers in such an abject state? 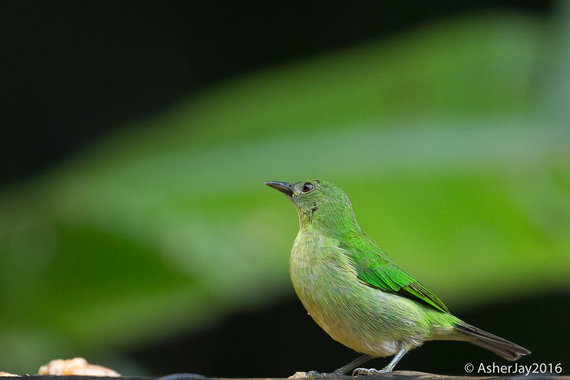 Female Green Honecreeper wild and free as a bird should be.

Before this expedition, I had seldom spent much time looking at birds; in fact I had suffered three decades of acute bird blindness. Apart from the occasional pigeon that wanted to share my New York bagel with me, and autotype trying to instill birding awareness in me every time I opted to express myself with a certain curse word, I didn't have much exposure to these dinosaur descendants. So as far as birding was concerned, I was, as my iPhone would put it, ducked. However, ignorance of your ignorance can be bliss, so my confidence never faltered in front of my flock.

The first field excursion began with much promise, just outside of Riohacha, at the Los Flamencos Sanctuary. Looking for shore birds, which were incredibly easy to spot, because they were all out in the open, as distinct shapes bestrewn across a scintillating flatland, bobbing for fish in fast drying shallows. This quick and comfortable access to birds big and small, in a plethora of hues, set my beginner birding expectations at an all time high for the days to come.

It only took 24 hours for that myth to unravel, for the very next day we visited the dry forests, where birds chirped cockily, hidden from view, tucked away behind irregular lattices of barren branches. "So many Great Egrets!" birder extraordinaire, Alvaro Jaramillo observed enthusiastically, "there's a flock of Ibis headed our way" Dorian Anderson, the biking birder, responded. "Scarlet-White Ibis hybrid in formation" Jose Luis Pushaina, a local guide qualified, only to be interrupted by George Armistead from American Birding Association. "Do you guys hear that Black-crested Antshrike?" he inquired redundantly, because naturally every one had heard it, most had seen it, some were even cheeping sweet nothings to it, all eyes and ears on point, except mine.

"Where?" I asked eagerly, and one of the three hawketeers, honed in on it with their digiscope and binoculars for me. "There!" they would all elatedly chime in. I was nowhere near perceptive enough to take pride in birding yet, if these fine lads wanted to hand a bird in the bush on a binocular to me, magnified and in focus, I was going to take it. 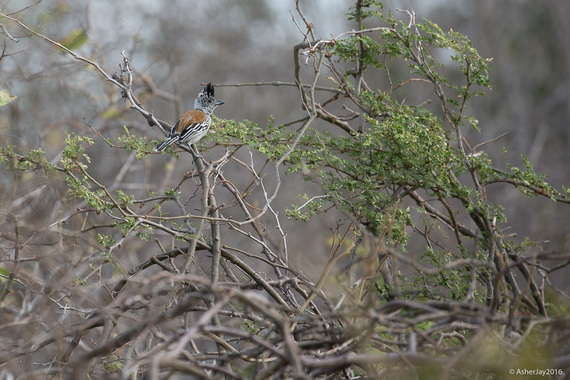 Black-crested Antshrike, because it's better to see it late than never.

Even my inability to focus my optics didn't stop a gorgeous vermillion Cardinal from showing himself to me. The Vermillion Cardinal, as his name suggests, was this unmistakable, Sin City red that I could not turn my back on. Jose quipped up, in Spanish and Alvaro efficiently translated him, "This bird is so very important to his people, it is part of their mythology and motifs, it's not protected in other places, and ends up being sold in cages, but in Los Flamencos it is protected. It's his favorite!"

Day two dawned in sharp contrast to the dry forests, for we had made our way into the humid, densely verdant rainforests flanking the Tayrona National Park. 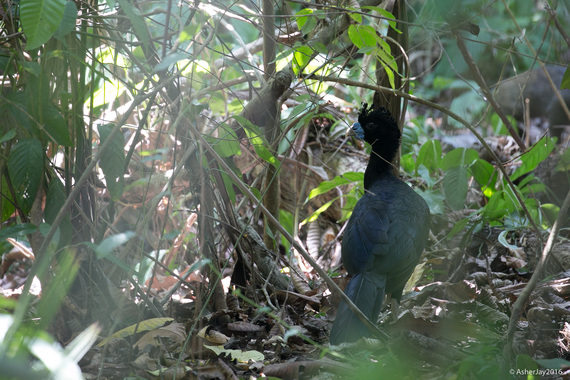 A male Blue-billed Curassow, an elusive, critically endangered ground bound bird species, the size of a turkey, in full view at the Tayrona National Park. It has been hunted incessantly by the locals for food and is thus rarely observed in the wild. I sure am glad we got to see two males and three females that day.

Alvaro underscored, "birds are nearly impossible to find in a rainforest." This wasn't the case with me, I saw birds everywhere, but mostly because I was in a foliage rich environment, and I was content mistaking leaves for birds.

Dorian broke it down for me, succinctly "You have to know the bird's shape and size, and the column or row it most frequently occupies in a habitat. If you know where to look for a known form, you will find it." So while the Birder Boys (as I've come to call them) were spotting Keel-billed Toucans, Rufous-tailed Hummingbirds, and Red-Crowned Woodpeckers, I was calling out sightings I was familiar with, like the "White-Crowned Cow" the "Black-Naped Goat" and the "Common Crested Chicken." Farm animals. They sound a lot more exotic when assigned Bird-like names. 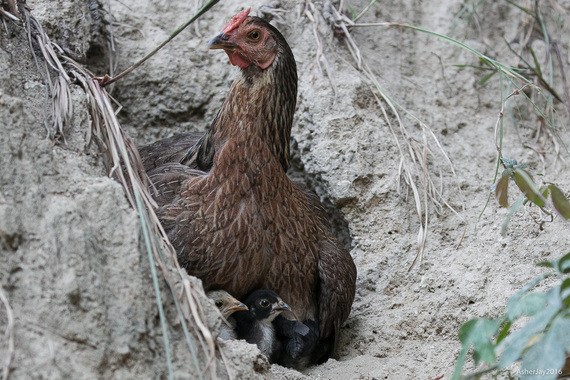 Common Crested Chicken with chicks, doing her chicken thing in a chicken burrow.

A short while later the clouds descended on us, and before long we were walking through a creepy English Moor at altitude.

When a forest begins to fog up, all bets are off for amateur birders, it's when you ought to pack away your binoculars and pick up your bourbon. The chances of me even spotting livestock at this visibility seemed unlikely. It was like a painter had rendered a tonal wash over the entire landscape. Gray birds, against gray leaves, in a silhouette dance against an increasingly bleak, gray sky.

In such conditions, it was clear that even the Eye of Mordor would fail to distinguish the gold on the Golden-crowned Flycatcher, but somehow Alvaro, George and Dorian saw it. They kept trending colors in the jungle that I was certain did not exist, similar to what fashion forecasting inflicts on Seventh Avenue. This season Bice is in. Let's all make Bice happen people! Bice is the new black.

So, despite worsening conditions, the birder boys were going strong. "Purple-throated Woodstar at 2 'o' clock" Dorian would yell, "Amazing, Spectacled Parrotlet to his left, a few branches above him guys," George rallied. "Grayish Piculet on the stick protruding from the shrub in the shadows back here," Alvaro countered. A gray feature on a gray bird, perched on a gray stick, in a gray shrub in the dark gray shadows... perfect...this Fifty Shades of Gray spectacle was going to leave me searching for my sanity, not unlike the movie.

"Glistening-green Tanager on the top branches of the tree, above the U-shaped vine to my right." Jaruen Rodriguez pointed out with a startling green laser that I inadvertently mistook for the actual bird. "Omigosh it's such a virulent green" I gushed. "That's the laser Asher, the bird is above the virulent green dot you are looking at," a true birder quickly corrected me.

Sadly that was not the only time I mistook the laser for a bird that day. 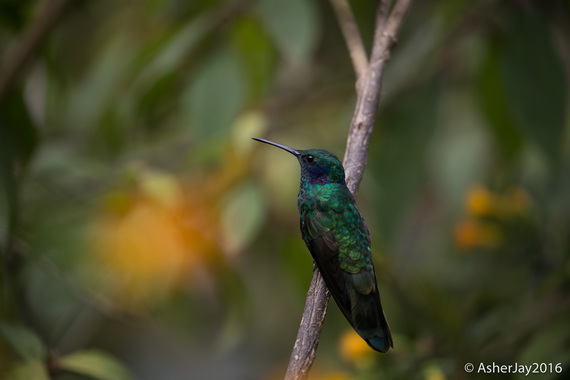 Green Violet Ear, yes once you finally figure out where it is branched, it is one saucy little sighting.

Birding is incredibly challenging, it requires patience, the recall of common bird names at the very least, keen observational skills, an inherent appreciation of birds, and access to quality optics that should make a real birder's birdy-sense tingle. I discovered that if I persevered, took down names on my iPhone after each sighting, and paid attention to everything the birder boys proclaimed, I too could become a competent birder.

If all else failed, I could always resort to inventing my own names for these exquisitely unique, unidentified flying organisms, like the Hot-ass Bird (more eloquently known as the Flame-rumped Tanager). 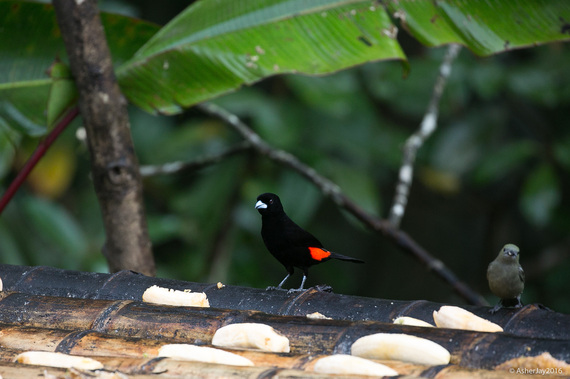 I made it my personal mission to get better at this outdoor activity. The thing about birding is that nothing can prepare you for it, but it profoundly changes the way you look at the world. You will never realize how much beauty, diversity and wonder you have been missing right before your eyes, daily, until you begin birding. It makes you pay attention and focus swiftly on minutiae, it anchors you in the present tense, amplifies all your senses, and it helps you perceive everything as important, particularly because every encounter is so fleeting.

You grow tolerant of changing externalities that you have no control over, and if you are anything like me, you finally learn to tweet outside the realm of Twitter. The best part of being a new birder is that every bird is an unidentified flying organism to you; it's a brave new world, inhabited by curious, alien, aerodynamic works of art that are well worth exploring! So what are you waiting for? Get birding!