The 52nd annual New York Film Festival came to a close on Saturday night with Alejandro González Iñárritu's "Birdman or (The Unexpected Virtue of Ignorance)," a dramedy about washed-up Hollywood superhero star Riggan Thomson's (Michael Keaton) comeback on Broadway. The film's cast also includes Edward Norton as a prestigious stage actor, Naomi Watts as a film star making her theater debut, Emma Stone as Riggan's post-rehab daughter, Zach Galifianakis as Riggan's manager/lawyer/best friend, Andrea Riseborough as Riggan's girlfriend and Amy Ryan as his ex-wife. Here's what HuffPost Entertainment editors Erin Whitney and Matthew Jacobs thought about the new film, which they both believe is the year's best so far: 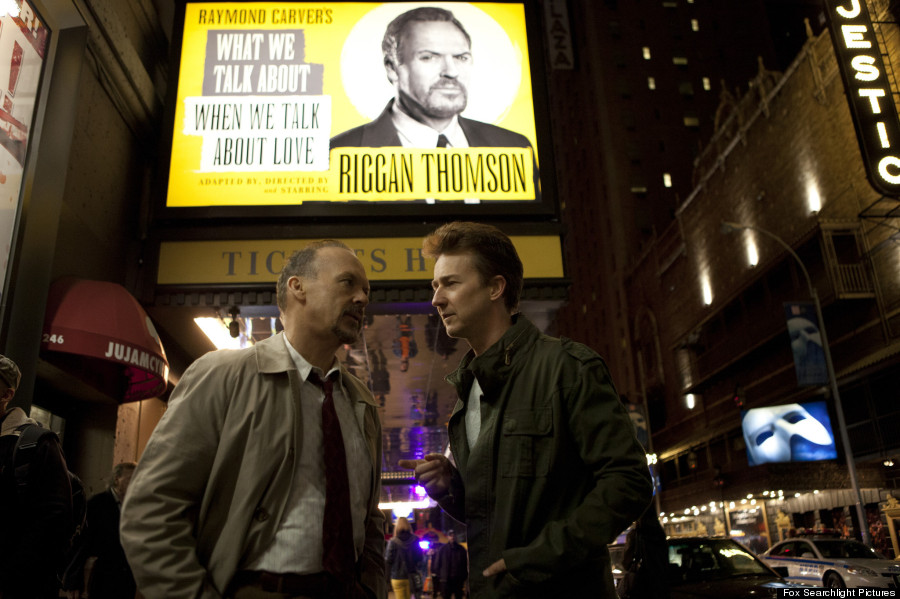 Whitney: We've reached the end of the New York Film Festival and I think it's fair to say we've finally found its gem. Alejandro González Iñárritu's "Birdman" is easily the best film of the fest, if not (I'm about to say it) the best film of the year. Being a fan of cinematographer Emmanuel Lubezki's work as well as Iñárritu's, my expectations were fairly high for "Birdman," and they were exceeded in every way. This film tells a story of a former Hollywood star attempting to revitalize his reputation by inserting himself into the Broadway world. Michael Keaton's Riggan Thomson wrestles with his former superhero alter-ego -- literally, as the voice and visions of Birdman constantly taunt him -- while trying to prove he's a true artist, not only to the world, but to himself. The most fascinating and enjoyable aspect of the film is how it plays with concept of artist versus critic, quite literally with a feud between Riggan and a fictionalized version of a pontifical New York Times theater critic. The writings of Roland Barthes are tossed around in a hilarious exchange between a high-brow journalist, a gossip reporter and Riggan, a Susan Sontag quote sits on his dressing room mirror and the biggest and harshest critic in the realm of art is represented by Riggan himself.

In the press conference following the film, much of the cast said that Riggan is a representation of Iñárritu. The writer-director shared that much of the film reflects his own struggle with criticizing his own work and his fear of failure. While the subjects of art and criticism, film versus theater and artistry versus celebrity could easily get lost in pretentiousness and heavy philosophizing, "Birdman" succeeds by using them as fuel for a fully energized, hilarious, dark and tragic story about discovering who you are and your importance.

Best of all, an audience less interested in such topics could just as easily enjoy the film, which, I think, is what makes it so appealing all around. Discussing its meta commentary on art and culture is only hitting on one of its many achievements. I could go on for paragraphs about its fantastic tracking shots and long takes, which inject it with a non-stop adrenaline, or its incredible cast that features some of the best performances from Edward Norton and Emma Stone, or even its tickling drum score. What was your reaction, Matt? 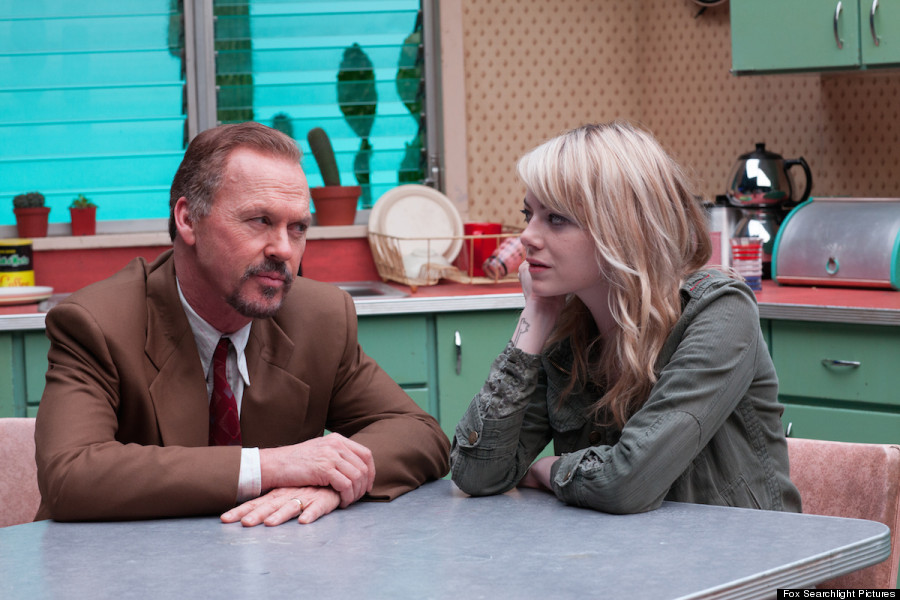 Jacobs: With the end of NYFF, we bid adieu to alarm clocks trumpeting another rainy Saturday-morning screening and say hello to what is, yes, the year's best movie so far. I'll second you on that, Erin. Now that we've talked in circles about our feelings for "Gone Girl," "Inherent Vice," "Whiplash," "Foxcatcher" and more, "Birdman" sends us out with the nearly three-week festival's grandest note.

I must say I've had mixed reactions to Iñárritu's highfalutin work in the past. The director ("Amores Perros," "21 Grams," "Babel") doesn't seem to aim for approachability, and sometimes I think his ideas get a bit lost on their way to the big screen. But the loftiness and existentialism of "Birdman" is thawed by bitter comedy, and the ideas that emerge are nothing if not poignant. The Broadway adaptation of the Raymond Carver short story "What We Talk About When We Talk About Love" at the movie's center functions as a spirit guide for the action -- the two-hour continuous take with which "Birdman" appears to have been filmed tracks the characters as they race around the narrow halls of Manhattan's St. James Theatre, awaiting cues, weighing one another's egos and transferring the play's volatile narrative to their own self-aggrandizing lives. We thought the six-minute tracking shot from "True Detective" and the opening moments of "Gravity" -- another movie Emmanuel Lubezki shot -- were impressive, but this is two hours of seemingly unbroken footage. (Iñárritu hides what few edits there are between the lengthy takes like a magician.) That means very few cuts and often no reverse shots during the dialogue. It's stunning. It gives the movie a kinetic feel, especially amid the clinking and clanking of the fascinating score -- and that's yet another item on our long list of the movie's accomplishments.

The tone reminded me of a restrained version of "Punch-Drunk Love." The mediations on how fame gets tied up in identity are like a mix between "Black Swan" and "Sunset Boulevard." But really, this is a singular achievement that needs no comparison to anything else in cinema. I dare say it may be a masterpiece. 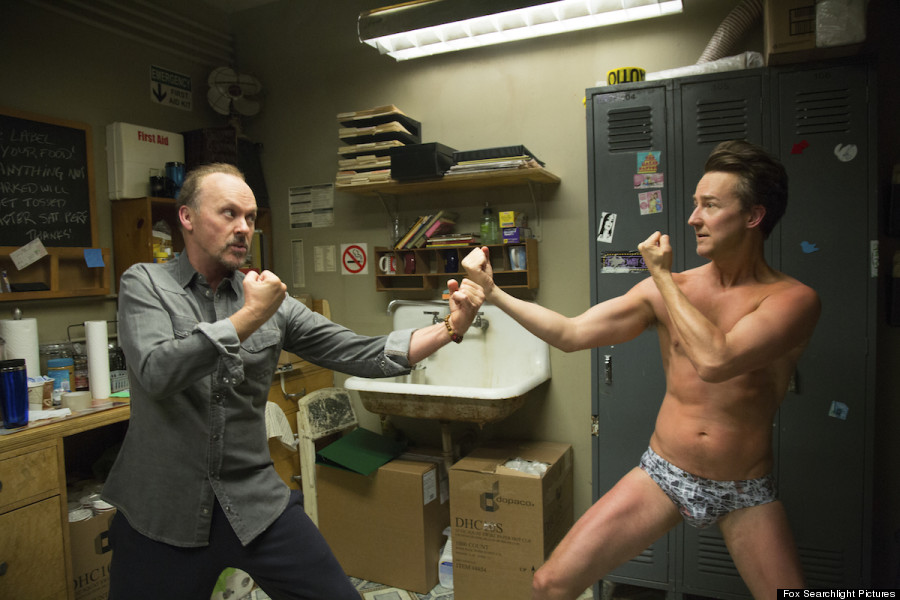 Whitney: I've noticed a lot of critics lately expressing their dislike for Iñárritu's previous work, which caught me by surprise at first. But considering his films' dark subject matter, each of them shrouded by a black veil of loss and despair, faced with an ominous looming death, I can definitely understand his lack of appeal. His films aren't necessarily enjoyable nor uplifting in the typical sense of the word. "Biutiful" is a perfect example of Iñárritu's visceral talent and ability to penetrate the rawest depths of human loss. In turn, it finds a way to reveal glimmers of hope amongst the decay of life. Iñárritu does something similar with the relationship between humor and tragedy in "Birdman," a film full of many great laughs, but laughs that derive from a deeper human fear of failure and self-doubt. I think through this magnificent blend, Iñárritu has finally found the perfect concoction to tell his very dark and very real stories in a way that larger audiences can better digest -- something few purely dramatic filmmakers can achieve.

Your connection to Paul Thomas Anderson's work feels very relevant, Matt, especially when considering "Inherent Vice" with its similarly large cast and the director's addition of comedy. It does feel betraying to compare "Birdman" to other films, though, and while watching it I found myself so absorbed in its story that I hardly made any outside connections. I do find it so interesting how this year's theme in film seems to be relationships between artist and critic and also an importance of the audience's awareness of the actors in their roles. So many films lately, mainly a handful of those from NYFF, deal with a meta commentary on the lead actor's former filmography and his or her relation to the industry. Olivier Assayas' "Clouds of Sils Maria" heavily replies on the awareness of Kristen Stewart's celebrity history and Juliette Binoche's career, "Maps to the Stars" is giant disturbing commentary on Hollywood, Ari Folman's "The Congress" is a projection of future fears of the industry in relation to Robin Wright's real life as an actress and now "Birdman" is a mechanism of Michael Keaton's resurgence. So many films are breaking the fourth wall, breaking nearly every cinematic wall, and asking us to engage in their fictional stories while simultaneously acknowledging the history and reality outside of them. It's such an odd but interesting theme, and I think "Birdman" does it best, or perhaps in the most relatable and entertaining way. 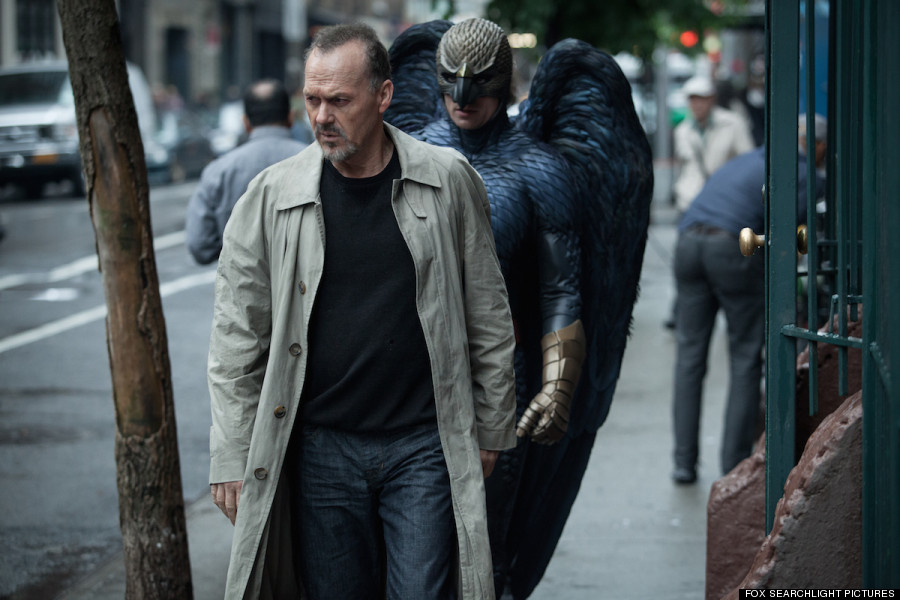 Jacobs: Absolutely, I've enjoyed taking note of the thread running through 2014's movies -- "Mr. Turner" offers a similar conversation, displaced in 19th-century England -- about the fleeting nature of fame. Not only is the "Birdman" approach the most entertaining, but it's also the most germane. In the same way the type of superhero movies Riggan starred in seem to signal a societal panic that ordinary humans alone cannot alleviate, the actors portraying these larger-than-life saviors are shifted to a fictional world that resembles almost nothing grounded in reality or substance. The crisis of confidence Riggan goes through upon being unable to shirk this rather ridiculous Birdman is like a character of its own -- the voices swimming through his head (including that of the avian superhero himself) are as punishing as the bystanders captivated by seeing a "washed-up" actor dart through Times Square in his underwear. How much of Riggan's psyche is a result of the public's demands, and how much of it are the ones he imposes on himself? Birdman was a fun mask to wear at first, but when the rest of the world doesn't want to let him shed that mask, it's almost impossible to remove it himself. Keaton captures that cerebral battle exquisitely.

All of this is exacted during a scene when an exasperated Riggan leaves the theater to the sounds of a homeless man over-emoting Shakespeare's "Tomorrow and tomorrow and tomorrow" speech. It's as if to inform Riggan that even the indigent are aware of his lack of agency. It's also one of the most appropriate uses of the famous lines "Life's but a walking shadow, a poor player / That struts and frets his hour upon the stage / And then is heard no more." Filmed with a stiffing energy, as if the bright lights and the big city are closing in on Riggan, the scene is the ultimate dark night of the soul for our hero -- a man trying everything to prove himself but constantly meeting roadblocks that hinge on larger societal hangups. Hangups that, if we extend the argument far enough, the gaudiness of superhero movies and other money-grabbing spectacles often fail to acknowledge.

This all may be a lot of sound and fury in itself. Like you said, Erin, anyone who doesn't want to pore over the crunchier implications of "Birdman" or just wants to enjoy the bountiful pop-culture references at face value (Jeremy Renner, Justin Bieber and Meg Ryan are among the many celebrities who become the butt of jokes) will enjoy the movie as well. Its darkness and magical realism make the film just abstract enough, but the constant meta nature is still quite grounded and approachable. We're all in on the joke, and that -- along with an astounding cast and inventive cinematography -- is the real strength of Iñárritu's approach.

'Birdman' Is The Best Movie Of The New York Film Festival, And It May Be The Best Of The Year
Fall Movies 2014