Birds have the incredible ability to hear different sounds even though they don't have outer ears like mammals do.

In fact, birds can perceive whether the source of a sound is above them, below them, or at the same level. But how do they do it?

It's not magic. According to a new study conducted by researchers at Technische Universitat Munchen (TUM) in Germany, birds localize sound by using their entire heads like giant outer ears.

This suggests that the bird's brain processes the difference in frequency between the ears to determine where that sound originated in relation to the bird's eye level, the researchers say.

Similarly, a mammal's outer ear is responsible, in part, for helping to place the location of a sound, by funneling and focusing sound frequencies as the sound travels to the middle ear and auditory canal. 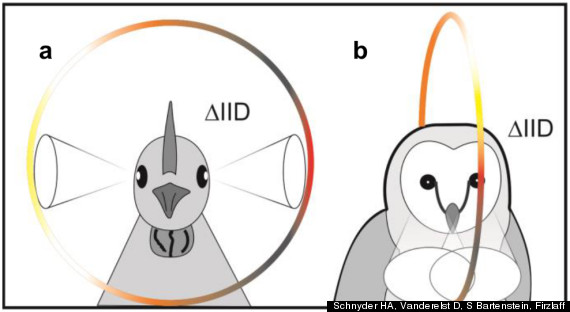 Lateral eyed birds like blackbirds, ducks or crows can discern the height of lateral sounds very precisely to the sound volumes. Frontal eyed birds like the barn owl have specific hearing capacities for frontal sounds.

“This is how birds identify where exactly a lateral sound is coming from -- for example at eye height,” the study's lead author Hans A. Schnyder, a PhD student in zoology at TUM, said in a written statement. “The system is highly accurate: at the highest level, birds can identify lateral sounds at an angle of elevation from -30° to +30°.”

Although the term "birdbrain" would suggest otherwise, this goes to show that avians are pretty impressive.

The study was published online in the journal Plos One on November 12, 2014.