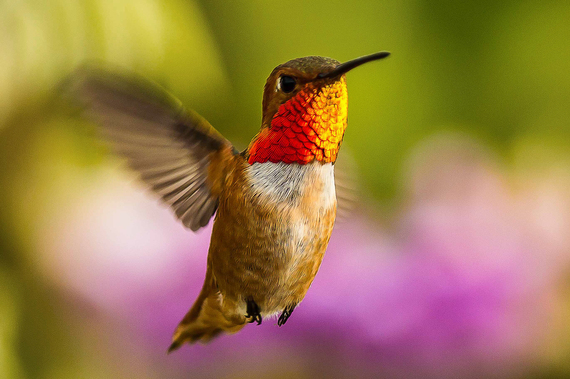 "The canary in the coal mine." That phrase has become part of the lexicon as a warning for danger.

Now birds are cautioning humans about the imminent threat of climate change -- and the news is not good. This from a report based on seven years of research by the National Audubon Society. I checked out their website, which featured material on environmental events -- both national and international. I learned that the Baltimore Oriole may no longer be in Maryland by the end of the century and that coastal species, like the sandpiper, were imperiled by rising sea levels.

I reached out to Gary Langham, Audubon's chief scientist, to learn more. Langham has a Ph.D. in Ecology and Evolutionary Biology from Cornell University. We discussed a wide range of topics, and he passionately delivered his insights and concerns.

Langham explained that at Audubon, "Activism is part of the story." The organization was founded 105 years ago by people alarmed by the slaughter of egrets being killed in order to supply women's hats with "plumes." Audubon spearheaded the 1918 Migratory Bird Treaty Act, the first American law to protect birds from indiscriminate hunting. "Concerned citizen interface has always be part of the Audubon agenda," Langham related. "All our conservation work to protect birds and nature is based on science, policy, advocacy, and education." He paused, "So is standing up and doing the right thing."

Walking me through the top points of the study, Langham detailed that 588 species were examined within the context of how climate change would impact them in 2020, 2050, and 2080. Taking into account the consequences of greenhouse gases, 314 species are going to be highly impacted unless, as Langham emphasized, "we recalibrate how we consume and generate energy."

Having the longest running animal census in the world (since 1900), Audubon is strategically positioned to contribute to the conversation. Langham discussed "habitat shifts" that evolved as a result of a changed landscape over the past century and a half -- an outcome of humans "converting land use to their own ends." Alarmingly, in the past forty years, "even common birds have declined by 40 to 70 percent due to habitat shift."

Langham underscored, "Birds have an urgent message." The reason they are on the move is due to climate change. In the past two decades, more than 200 species of birds have moved their "habitat range" substantially north in order to achieve comparable living conditions. This migration then impacts the ecosystem where they resettle. Langham stressed, "All this disruption is not good. Birds are an excellent indicator of nature overall. What impacts them will impact us. As the birds go, so do we."

On the bright side Langham assured me, "When you give nature half a chance, it can respond in a positive way." The bottom line is, "Restorative measures are the key. If we take concerted actions, the birds can recover." He gave the example of the country's national emblem, the Bald Eagle, which was brought back from the brink after being devastated by the effects of DDT.

Commenting on the newly elected representatives in Congress, Langham observed that the "fingerprints of big oil and gas" were clearly evident. "Climate change shouldn't be a partisan issue," he insisted. "It's about doing the right thing for future generations. It's about protecting nature and our children."

When I asked Langham about the XL Pipeline, he was unequivocal in his response. Audubon is officially opposed to it because of the inherent risks and disruptions from spills. Regarding fracking, Langham pointed to the challenges facing birds that nest in the Bakken Shale area of North Dakota. He said succinctly, "Unregulated chemicals used in fracking are the wild card. What's being pumped into the ground cannot be good for birds or people."

Langham was clear. "Most of the opposition comes from the extractive industries. They just use nature for their own purposes. They cut it, burn it, or extract it. They want the fewest regulations with the most profits." For Audubon, supporting renewable energy is a core belief, as is reducing emissions via legislation and public policy.

On how he would convey his concern to the average citizen, Langham said, "Birds often represent or symbolize places in ways that are meaningful to people. The Common Loon is a familiar bird for people out fishing or swimming in the 10,000 lakes of Minnesota. Our Climate Report suggests that loons may no longer be in Minnesota by the end of the century. The idea that one cannot share the call of the loon with kids or grandkids is troubling because it foreshadows not just the loss of the loon, but of one's sense of place."

Tell the EPA We Need Protection from Natural Gas Pollution