" A man who serves power [artha], and pleasure kama], and religion [dharma] in this way wins endless happiness that has no thorns in this world and the next."

"If you've ever wondered why there is shortage of Birkin bags in the world, it's all because of her..." mumbled my friend, as he motioned to a woman making a dramatic exit in the middle of a Vinyasa class at Brentwood's "Maha Yoga" studio. 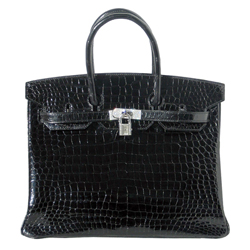 Even a yoga instructor such as myself knows of, and has fantasized about, the Hermes Birkin bag. Its elusivity is legendary -- and not wanting to seem too eager about such a thing, I whispered back "You mean she has more than one?" -- all the time highly aware that we were in the middle of a yoga class and under the pretense that this was a sacred space.

"Are you kidding? She and her boyfriend always leave early, they never 'have the time' to make it through an entire yoga class, but somehow he seems to 'have the time' to keep buying her more bags. Still, they seem happy, you know, whatever works..."

And so goes the tale of true love and romance in the Los Angeles yoga scene. Over the years I've been searching for a "spiritual" man, looking to experience something deeper than materialism, but today I'm looking at this joyful Birkin Yogini and I think I'm having a perception shift. Maybe she's had the right idea all along. As I continue to look around the sweaty classroom filled with lithe bodies sweating and stretching to make all of their private parts more public, I begin to see something deeper than the "consciousness" pick- up scene.

I used to just see an overly manicured, buffed, polished, and diamond clad group of narcissists! For years I had kind of a reverse snobbery for such yogis and that's why eventually I stopped teaching at the studios they populated. I felt, "I'm doing the real yoga, I study the scriptures, I meditate, I do the poses with the proper alignment and, most of all, I don't plan my $300 couture yoga outfit a week in advance." But, last night I had an astrological reading (all proper yoga teachers frequently check in with the stars) and the astrologer told me to... have more fun. More fun? What?

I was prepared to be told to stand on my head for 20 minutes, chant "Om Namah Shivaya" for two days straight, eat only raw foods from the spring equinox until mid-summer's eve, but have more fun? Now that was something I was wholly unprepared for. For years my family and friends have been pushing me to have more fun, but I thought that was just because they weren't "spiritual" or didn't understand the path I was on... But now, to hear this message from a revered astrologer (I know, it's an oxymoron), I had to ask - am I missing the point?

"Have more fun?" I asked mystified, as if i were deciphering an secret, magical code...

"Yes" she answered, a beautiful Jamaican woman who spoke with the authority of the cosmos on her side. "It's a highly spiritual activity. Bring yourself into balance. Right now - FUN - is your destiny."

So this morning I woke up and asked myself, "Now where can I get some laughs and still do what I love?" Well, of course, no other place than the loud, rebellious, nightclub-y studio called Maha Yoga. For those of you who have never heard of Maha Yoga, it really is worth a visit for the true LA sightseeing experience. Here, at the epitome of spirituality-meets-materialism, you can see Prada flip flops stepping on yoga mats made of recycled materials. Rolex watches intertwine Mala beads around tiny manicured hands and Sanskrit tattoos accent sculpted abs topped only by botoxed faces and $300 highlights. You'll probably also hear intent discussions about the latest cleanse, because these days being on a cleanse is much more acceptable than admitting to an eating disorder.

Balancing material possession with spiritual pursuits is a quest that has been addressed by many religions. Unlike the Christian, "A rich man getting into heaven is as likely as a camel passing through the eye of a needle," Hinduism offers up another perspective. The 2nd century CE produced one of the most important expositors of the Brahmanical tradition named Manu. "The Law-code of Manu" is a legal treatise that articulates a normative Hindu code of ethics. One of the key concepts that Manu discusses is the idea of trivarga, or "three goals."

The first is goal is kama, or "pleasure", second is artha, or "power" and the third is dharma, known to us as "truth" or "duty," which is performed as a path to liberation, moksha. Manu explains that these three aims work together much the same way the three legs of a stool are required to hold the seat. We need all three to create the perfect balance. Unlike more austere forms of religion, Manu shows us that these goals are not mutually exclusive, but rather integral parts of a well-balanced whole. Earthly pleasures and desire can and must co-exist on a path of spiritual truth. In contrast to the ideal of the renunciant so central to Jain and Buddhist traditions, Manu provides a paradigm for a human life lived in deep engagement with the world. As long as our intention is pure, we can actually channel our desires for pleasure to assist us on the path to freedom.

Nowhere in this world do we see any activity done by a man free from desire; for whatever at all that a man may do, it is the work of someone who desired it. By engaging in them properly, a man attains the world of the immortals and, in this world, obtains his desires just as he intended.

In earlier years I taught at Maha Yoga and at the time embraced the playful, light-hearted feel. I also valued the freedom to teach whatever pleased me, because I had just spent years being micromanaged about form and etiquette at another yoga studio. I didn't fully realize it at the time, but at Maha, I had the best boss I've ever had in my life - Steve Ross.

For those of you who have never heard of Steve, he really is a yoga icon. It's trendy now, but Steve was the first yoga teacher to start playing rock music in class. Steve actually has a rock background. After playing guitar for the band Fleetwood Mac for years, he couldn't deny his true nature as a yogi, a path he began when he was a mere teenager. Steve is one of the most committed yoga practitioners that I know. Very few people who live in our contemporary society are actually as disciplined as Steve in their spiritual practices. Steve has eaten only raw food for the last 35 years and not a day has gone by that he doesn't meditate, chant, practice pranayama (breathing) and asana (yoga postures). But you'd never know it -- the strict discipline is the foundation, but Steve is the most light-hearted fun person you could know. In other words, he embodies spiritual practice turned fun.

As I walked into class today and the little voice of horror began emerging in my head at the bastardization of yoga, at what America has done to this sacred practice, I had to stop and ask myself what was really going on. Does spirituality have to mean the deprivation of flashy possessions? Just because we know that material gains don't bring happiness, it doesn't mean they necessarily prevent it either. As I looked with fresh eyes at the Birkin Yogini and saw her giggling, saw her enjoying the moment, saw the trivarga embodied, I took new stock of Maha Yoga and thought - I am home.