Half-century commemorations of major civil rights events are now studding the calendar of our nation's media -- inevitably, since 1963 was such a fateful year.

Last month the media rightly celebrated the March on Washington and Dr Martin Luther King Jr's resonant "I Have A Dream" speech -- a broad wedge of an event that began to prize open overdue changes in our society. And now this week, by contrast, the media have had a poignantly sharp event on which to tightly focus -- the Ku Klux Klansmen's murder of four young girls by bombing Birmingham, Alabama's 16th Street Baptist Church on September 15th. An event that lasted just a few, but interminable seconds.

And what is seen to have come, as the media reflect on it, from this agonizing stab of pain to the nation's conscience? From this dark and nauseating crime, contrasting so much with the light and hope that suffused the Lincoln Memorial's crowded steps just three weeks previously?

Resounding through the national voice of the Washington Post to regional echoes from The Oregonian in the northwest or the Miami Herald in the southeast, the message was repeated that this killing of 11- and 14-year-olds played a vital part in galvanizing, perhaps making irresistible, the country's commitment to racial reform.

Few media outlets, in print, broadcasting or web, put it as resoundingly as my colleagues at PBS's Religion and Ethics Newsweekly did, employing an apt quotation from the Birmingham-born Freeman Hrabowski III, himself just turned 13 years old at the time of the bombing, and decades later to become President of the University of Maryland, Baltimore County:

"It shook the very fabric of our society broadly, not only in Birmingham but in the country ... because if four little girls dressed in white for Sunday school can be blown to pieces because of hatred, everyone has to stop and think, where are we going as a society?"

What went largely unreported this week was how tremors from the event reached very much further ... well beyond even the breadth of "not only in Birmingham but in the country".

I've long been fascinated by the reaction far across the Atlantic Ocean -- specifically in Wales, a valiant if tiny nation that would fit into Alabama six times over.

Birmingham's commemoration service on Sunday took place beneath a powerful, mainly blue work of art called "The Wales Window." Not many people locally know why. I've even heard Birminghamites label it the 'Whales Window,' as if there was some marine association.

The fact is that the girls' murders and the dynamite's destruction of the church windows made a powerful impact on a gifted stained-glass artist called John Petts (1914-1991), who was then living in the Welsh coastal village of Llansteffan. It horrified him both "as a father and as a craftsman," he said at the time. He resolved to swiftly design and make a replacement.

Petts had been a conscientious objector in World War II, and was known for creating beautiful church windows in Wales, but also for dramatic representations -- in other media -- of Welsh miners.

The artist's concept for Birmingham was inspired by, and starkly incorporated, a single phrase from a scriptural quotation, "You do it to me" -- from Matthew's Gospel, when Christ says: "In as much as you do it to one of the least of these my brothers, you do it to me." 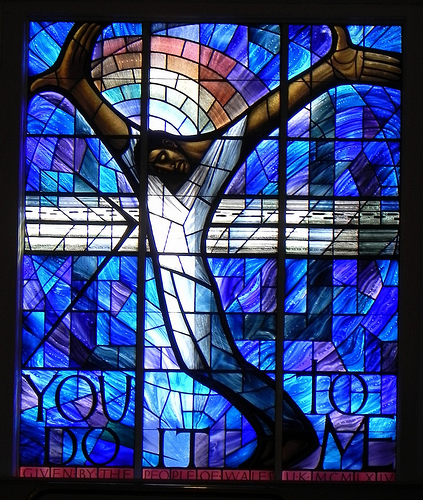 He depicted Christ as black -- quite a daringly advanced image for its time. The present-day 16th Street pastor, Reverend Arthur Price, says it is "a powerful emblem of Christian love, extended across an ocean." Price and others have seen Christ's right arm as pushing away hatred and injustice, while his left offers forgiveness.

And there's also a media dimension to this story, of which -- as a Brit by origin, as well as a journalist -- I can't help being proud. It concerns how the window, and its transportation to Alabama, was paid for.

The editor of Wales' national newspaper, The Western Mail, was at the time David Cole, the youngest-ever head of that venerable institution (27 years old when he was appointed) and indeed the youngest editor of a major paper anywhere in the UK. He was as appalled at the girls' deaths as Petts had been, and together they agreed to establish a readers' fund to pay for the work.

Both artist and journalist wanted to avoid rich and possibly self-aggrandizing donors. So they set a cap on the size of donations. No-one could give more than a 'half-crown' per person (that's about 30 cents in today's U.S. money). But hundreds of thousands gave. The newspaper -- and other outlets too -- carried stories and pictures of young children forming lines outside the Mail's building to contribute their pocket-money.

And so the window truly did become a gift to the people of Birmingham, AL, from the ordinary people of Wales.

Out of an unbearable instance of humanity's capacity for inhumanity there grew a great energizing of common purpose among people of good will, wherever they might have come from.

It was broader even than Civil Rights at last being won by U.S. citizens previously denied them -- as it widened globally to embrace much, much more, including of course an artist's studio... an editor's desk... and countless neighborhoods in a small country four thousand miles away.

Read more of David Tereshchuk's media industry insights at his regular column, The Media Beat, with accompanying video and audio. Listen also to The Media Beat podcasts on demand from Connecticut's NPR station WHDD, and at iTunes.