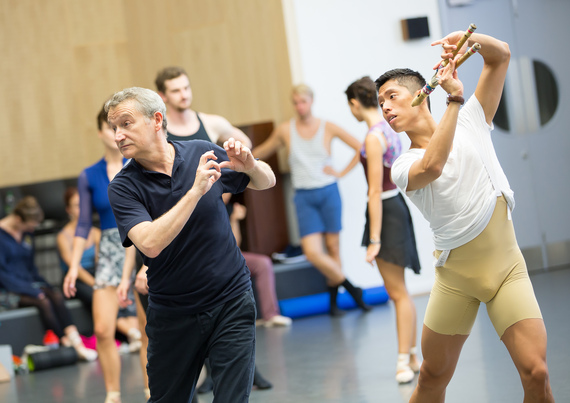 David Bintley rehearsing 'The Tempest' with Tzu-Chao Chou, photo by Andrew Ross
"Hell is empty, and all the devils are here."

Shakespeare penned these famous words from The Tempest more than 400 years ago, but in a day of demagogues, Daesh and deep social divisions, they just as easily could have been uttered today.

This hasn't been lost on David Bintley, artistic director of Birmingham Royal Ballet, who will premiere his own version of The Tempest this October. With an original score by Sally Beamish and sets by acclaimed War Horse designer Rae Smith, Bintley's ballet promises a lavish spectacle befitting of the Bard's enchanted-isle tale.

As in the original play, though, the illusions of the stage give way to a message as simple as it is profound: in Bintley's own words, "only forgiveness can set you free."

Recently I had the chance to wax Shakespearean with Bintley about his new take on The Tempest. Following are some highlights of our conversation:

You have taken on a number of Shakespeare's works. What drew you to The Tempest?

I made a ballet 34 years ago set to bits and pieces of Sibelius, among them his intro to The Tempest. I wondered if there was a whole ballet there, but ultimately decided Sibelius didn't give the characters enough volume. So I waited exactly 30 years and finally discovered Sally Beamish, and within a week I had a composer. We also knew we were 4 years from the quadricentenary of Shakespeare's death, so everything fell into place perfectly.

On the surface, The Tempest is about a colorful cast of characters on an enchanted desert isle, but there are many different ways to interpret the story. From your perspective, what is The Tempest all about?

Primarily what I've created is a ballet, so it's about getting as much out of the music and imagery and poetry of the play as I can. When I was choreographing, I made a point of rereading each scene and tried to draw on every word Shakespeare wrote about the seashore, about music -- everything. But ultimately this is a story about forgiveness. It's about a man, Prospero, who was dreadfully wronged and whose whole life centers around vengeance -- and in the end, he realizes it's not revenge that sets you free. It's forgiveness.
Jenna Roberts as Miranda and Tyrone Singleton as Caliban, photo by Andrew Ross 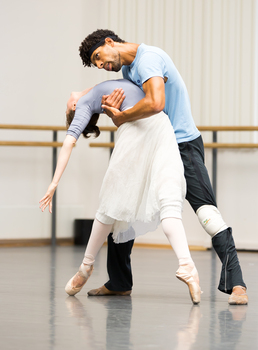 Do you have a favorite line or passage from the play?

There's a very famous passage in which Prospero is talking to the spirit Ariel about his magical powers and he lists this long catalog of ways in which he's meddled with nature: "I have bedimmed the noontide sun, called forth the mutinous winds..." He's caused tempests and earthquakes and eventually confesses he's raised the dead. There he realizes he's gone too far and says he requires "some heavenly music." He renounces magic, swearing to bury his staff and drown his book. What he needs is to forgive and be forgiven.

What inspires you, as a choreographer, about Shakespeare's tales, and how does dance illuminate Shakespeare?

With a ballet you don't have the words, so you don't have Shakespeare, per se. But there's this untouchable element of "Shakespearean-ness" -- we talk about things as "Shakespearean" even when they're not Shakespeare. It's that larger view of humanity and that grandness of vision that can take something like a handful of characters on a desert island and turn it into something so deep and so profound and so indicative of human nature and the human condition. Beneath the text is this all-encompassing view of humanity -- in all its greatness, in all its misery, in all its humor as well.

You mentioned that finding composer Sally Beamish is what allowed your idea of The Tempest to take flight. Tell me more about your collaboration.

An idea can lie dormant for decades before it finds the right voice. That's exactly what happened with Sally. As it turned out, she'd been dying to write a ballet, too. It's taken 2 years to write the score and a year to devise the scenario. When we went into individual sections, I opened up as much as possible to give her the greatest idea of my intention. The choreography was not set until I had music and was in the studio with the dancers in front of me. But working with Sally, I already had an acute sense of the dramatic impulse behind the steps. And in what amounts to just over 100 minutes of music, in all but two instances, her response was just perfect.

You've worked with Rae Smith before. Why did you choose her as the designer for The Tempest?

I met Rae just before she did War Horse. I had seen some operas she designed that I thought were truly magical and worked with her on The Prince of the Pagodas 5 years ago. Once Sally came on board, I thought the only person who can design this is Rae. She's great with taking a period -- in this case, we have a Jacobean and Elizabethan background -- and reinterpreting it through a fantastic lens. For instance, I see all spirits in The Tempest as projections of Prospero's imagination, made up of elements of his past. So Ariel has the outline of a Jacobean youth, but is made of seaspray, seaweed and shells. That's the kind of imagination Rae brings. 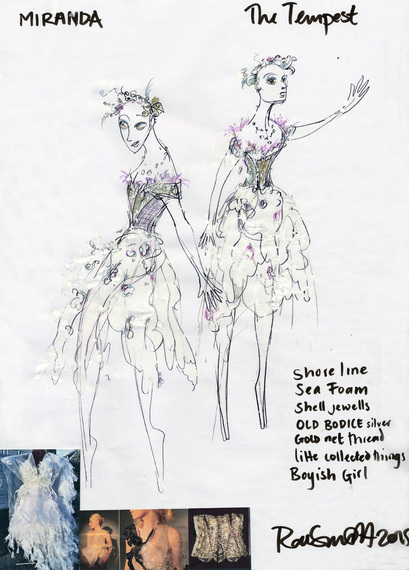 Sketch of Miranda by Rae Smith
Prospero's daughter, Miranda, is the only female character in the play. Can we expect to see more women in your production?

Yes. Notably I've introduced Prospero's wife, Prospera, whom we meet when we tell the back story of how Prospero and Miranda came to live on the island. When Prospero is usurped, and he and Miranda are cast adrift on a leaky boat, we see that Prospera was part of that story and that somewhere along the way she disappeared. I want the audience to really feel Prospero's pain and anguish -- he didn't just lose his dukedom; he lost everything. Later on, in the masque scene, we link Prospera to the character of Juno, the goddess of marriage. It's the spirit of Miranda's mother coming back to bless her marriage to Ferdinand. She is joined by the goddesses Iris and Ceres, who correspond to the ladies-in-waiting Miranda remembers from her youth.

In the play, Prospero is essentially the director who masterminds the whole plot. As a choreographer, can you identify with him?

I think I identify with every character in The Tempest. They're all such extraordinary creations. Having become so familiar with every word and nuance in the play, having seen so many productions and read so many books, I love every character and there's a part of me in all of them. But at the heart of it is Prospero, and this huge idea that I think we can all identify with -- that if you wreak revenge, you're just perpetuating that cycle. At the end, when he pardons Caliban for planning to kill him, he famously says, "This thing of darkness I acknowledge mine." What a world there is in that line! He is recognizing that he made Caliban the way he is. He is recognizing that he lost his dukedom because of his own interest in power. He is acknowledging that you have to forgive, even to gain forgiveness.

Birmingham Royal Ballet will premiere The Tempest in Birmingham on October 1, 2016 and tour in London, Sunderland and Plymouth. For tickets and information, visit www.brb.org.uk/